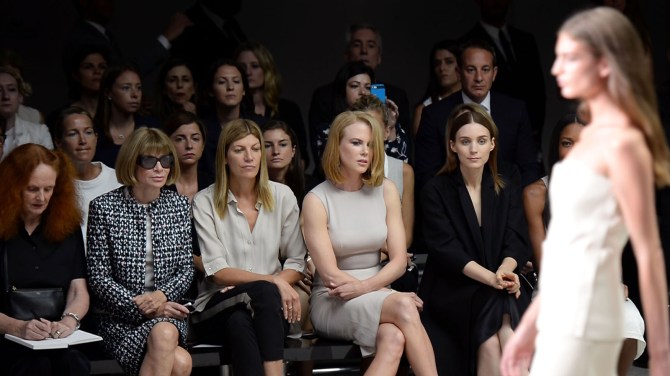 Fashion publicist Kelly Cutrone became notorious for saying that if you aren’t seated in the first three rows at a show during Fashion Week, you might as well stay home. Well, if the first three rows are where the power players sit, then it goes without saying that the crème de la crème of the fashion world sits in the front row, and the front row only.

Obviously, sitting in the front row is important to fashion show attendees, but it’s also extremely important to designers. With an average of 125 assigned front row seats at a typical fashion show, many designers are judged just as harshly by who sits in those seats than by the clothes that come down the runway. Score a coterie of major editors like In Style’s Ariel Foxman and Harper’s Bazaar’s Glenda Bailey? You’re in the conversation. Score a major A-lister like Jennifer Lawrence, Rooney Mara, or or Nicole Kidman? You’re all but guaranteed a ton of press simply for nabbing top celebrities.

Erin Hawker, a PR veteran and founder of Agentry PR (who’s in charge of seating at top shows this season including Christian Siriano) says that doing the front row seating for a show is basically like “a science.”

“First you have to count how many front row seats you have, and then guestimate how many should go to the media, retailers, VIPs, and friends of the brand,” Hawker says. “Once you’ve determined that, there’s always internal fighting that goes on as to who deserves to be in the front row.”

Celebrities invited to a show almost always land in the front row. Designers actively court big stars for this purpose, sometimes paying them to attend. Lesser celebrities, meanwhile, vie for seats as a means of scoring the press of being associated with Fashion Week. Celebrities are usually seated together in the middle of the runway, where photographers can get them all in a single shot—also known as the money shot.

Fashion “it” girls, socialites and “friends of the brand” also fall in the front row category. Former hedge-fund manager turned Vbeauté founder Julie Macklowe has been a front row fixture for over ten years.

“I started purchasing a lot of clothes when I had my hedge fund career, and I had that income, and supporting a lot of younger designers, and that got me my ticket,” she says. While Macklowe says that she used to go to anything she was invited to, she’s gotten much pickier about what she’ll attend in recent years, choosing to only go to the shows of designers she’s friends with—people like Zang Toi, Naeem Khan, and Carolina Herrera.

As for whether Macklowe would attend a show where she wasn’t seated in the front row, she says: “Generally my view is, if your not in the font row, you probably don’t have a super-strong relationship with the designer. And like my friend Tom Murro of Celebrity Magnet says, ‘Go front row, or go home.’”

Select members of the media also get a prime spot. Hawker says she tries to represent one person from each major publication in the front row at the shows she handles, but there’s a definite hierarchy. “We’ll have the Editor-in-Chief in the front row, and the Market Director if there’s room, and sometimes someone more junior who is really reviewing the show, like someone from Vogue.com,” she says.

Vogue Editor-in-Chief Anna Wintour and other key press tend to get seated at the end of the runway next to the photographers—where models pivot and you get the longest look at each outfit. It’s also the easiest spot to make a quick exit, as Wintour has proven season after season.

Another group that’s been infiltrating the front row to much debate: Fashion bloggers such as Bryan Yambao (aka Bryan Boy), Susie Lau (aka Susie Bubble) and the Man Repeller’s Leandra Medine.

According to Lainy Hedaya, a front row regular and founder of fashion blog Haute Inhabit, having a good seat as a blogger is necessary to get the best content for her site and her 46,000 Instagram followers, particularly because her readership expects gorgeous and original photos that just wouldn’t be possible without a good view of the runway, she told us.

Of course, the problem for publicists who decide who actually gets to sit in the front row is that almost most everyone in attendance at Fashion Week thinks they deserve one of the best seats. Who can forget Jill Zarin storming out of the Luca Luca show on the “Real Housewives of New York” because she found herself in the second row? Last season, celebrity spawn Angela Simmons reportedly quipped from her second row seat at Custo Barcelona: “Why would they invite me if I’m not sitting front-row?”

One way that publicists handle the many overwhelming egos associated with Fashion Week seating is by giving those who are expecting a front row seat a heads up if they aren’t getting one. Linda Gaunt, whose firm is handling Cynthia Rowley, among other shows this season says, “We let [people] know so that they can make a decision not to attend, as opposed to bruising an ego or putting them in an awkward position.”

The good news for those that do make the ascent to the front row? According to Hawker: “I rarely move people back once I’ve seated them in the front.”