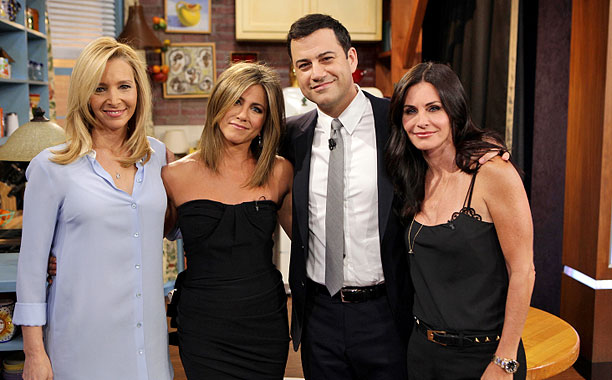 Was it the ‘Friends’ reunion everyone was hoping for? Not exactly, but until we get it, an impromptu sketch that aired on “Jimmy Kimmel Live” starring Jennifer Aniston, Courteney Cox, and Lisa Kudrow will have to do.

MORE: 17 Celebrities You Forgot Were on ‘Friends’

Aniston, 45, was a guest on the late-night show and was chatting with Kimmel, when he told her he’d written his own fan fiction of “Friends” and wanted her to get involved. Then, he revealed that the show’s production team had replicated Monica’s loft apartment and handed Jen a script.

There were obviously more surprises in store—Courteney and Lisa appeared as guests and read from Kimmel’s script, which had him playing David Schwimmer‘s character Ross.

After a few lines with Kimmel, Cox and Kudrow appeared, and it was revealed that Kimmel killed off Joey and Chandler—they both died of rabies from a monkey bite from Ross’ pet monkey Marcel, but had Phoebe randomly using Joey’s famous catchphrase “how you doin’?”

It’s long been rumored that a reunion was in store for the beloved NBC sitcom, which aired from 1994 to 2004, but that Aniston was the one holding out, though she’s denied it. Judging by her less-than-thrilled reaction to the surprise skit, however, we’re starting to think that might be true.

Watch the video below!