Friends is known for its holiday episodes, and while Friends‘ Halloween episodes aren’t as well-known as their, say, Thanksgiving or Christmas episodes, they’re still worth watch, especially as all of us stay inside for Halloween (at least for now.)

Friends—which starred Jennifer Aniston, Courteney Cox, David Schwimmer, Matt LeBlanc, Matthew Perry and Lisa Kudrow as six friends in New York City—ran for 10 seasons from 1994 to 2004. Throughout its run, Friends won six Emmys, including one for Outstanding Comedy Series for its eighth season in 2002. Though Friends made the cast—and their characters, Rachel Green, Monica Geller, Ross Geller, Joey Tribbiani, Chandler Bing and Phoebe Buffay—household names, some cast members have talked about the downsides from the show’s fame.

“It’s a blessing and a curse. It gave us everything but also gives you more of a challenge, to shape people’s perceptions of you. It’s ‘Matthew is Chandler Bing and Jennifer is Rachel Green,’ so it’s hard for people to even believe that we’re playing other people. It’s just taking gentle baby steps and allowing your fans to grow with you,” Aniston told Empire magazine in 2015.

Still, despite the cast’s complicated feelings about Friends, there’s no doubt that the sitcom is one of the most popular TV shows in Hollywood history. Need something to watch on Halloween? Try one of these Friends Halloween episodes. 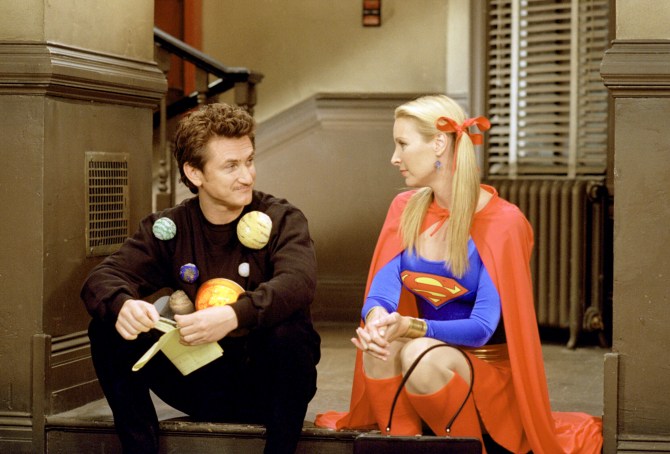 “The One With the Halloween Party“

“The One With the Halloween Party” is a classic Friends Halloween episode—and it’s not only because it’s the only episode set during Halloween. The episode revolves around Monica’s Halloween party, where tons of hijinks occur. Monica dresses as Catwoman, Phoebe as Supergirl, Rachel as a pregnant woman who won’t be able to fit into her favorite dress soon, Chandler as the velveteen rabbit (a.k.a. just a giant pink bunny), Ross as Spudnik (a potato with a space satellite that also kind of looks like doody) and Joey as Chandler (a.k.a. a sweater vest.) There’s an arm wrestle between Spudnik and the Velveteen Rabbit, a cameo from Sean Penn (who’s dating Phoebe’s sister Ursula) and some mean kids. What more could you ask for from a Friends episode?

“The One Where Joey Dates Rachel“

Unlike Thanksgiving and Christmas, there is only one Friends episode set during Halloween, but that doesn’t mean that there aren’t other episodes that still exude the Halloween spirit. For Friends fans, there’s no scarier storyline than Joey dating Rachel, which makes “The One Where Joey Dates Rachel” the perfect Halloween episode. The episode ends with Joey and Rachel cuddling in armchair as they watch 1983’s Cujo about a rabid dog who kills a family. Joey’s last word in the episode, “Terrified,” will send shivers down any Friends fan’s spine.

“The One With Unagi“

“The One with Unagi” is the closest fans will come to a jump scare in Friends. The episode doesn’t scream Halloween, but there are a ton of twists and turns that make it feel like a diet horror movie. The episode starts with Phoebe and Rachel telling Ross about a self-defense class they took, which leads Ross to tell them that they don’t have “unagi”—a.k.a. a state of total awareness and type of sushi. To prove to Rachel and Phoebe that they don’t have “unagi,” Ross stalks them in an attempt to scare them. The tables are turned at the end of the episode, however, when Phoebe and Rachel scare ross in return.

“The One With All the Candy“

Aired in December, “The One With All the Candy” is technically a holiday episode, but, hey, there’s candy, and what’s more Halloween than that? The episode centers on Monica making chocolate candy and hanging them in a basket on the door of her and Chandler’s apartment, so she can get to know their neighbors better. The plan backfires when the neighbors become crazy over the candy demand more than Monica can make.

“The One With the Fake Party“

“The One With the Fake Party” also doesn’t scream Halloween, but it has one of Friends’ iconic costumes. In the episode, Rachel tries to win over her work client, Jonathan, by throwing a fake bon voyage party for Ross’ English girlfriend, Emily. Rachel tries everything to woo Jonathan (including playing spin the bottle.) But in a last-ditch effort to win him over, she dresses in her high school cheerleading outfit and performs cartwheels for the party—or at least tries to before she busts her lip.

“The One With the Holiday Armadillo“

Yes, we know that “The One With the Holiday Armadillo” is technically a Friends holiday episode, but we also embrace it as a Halloween episode based on how many hilarious costumes there are. The episode centers on Ross, who has a plan to dress up as Santa Clause to teach his son, Ben, about Hanukkah. When all the Santa costumes are sold out, Ross opts for the second-best option: an armadillo costume and thus the Holiday Armadillo is born. While he’s telling Ben about Hanukkah, in barges Chandler in a Santa Costume. Moments later, Joey comes in in a Superman costume, which leads to Phoebe’s iconic line about how the moment looks like the Easter bunny’s funeral.

“The One With Two Parts“

“The One With Two Parts” is set after Halloween, but there are some spooky twin twists. In part two of the two-part episode, Joey dates Phoebe’s twin sister, Ursula. When Phoebe learns that Ursula plans to dump Joey because she isn’t into him like that, Phoebe pretends to be her twin sister to let Joey down easy. The episode may not be super Halloween-y, but it’s still a wild ride for the viewer, who sometimes also can’t tell the difference between the Buffay sisters.