Streamer Freya Fox wants to set one thing straight. Despite what you might have heard from mainstream news outlets that female and queer inclusivity in gaming is way better in a culture historically driven by “bros”; it’s not. It’s just as toxic as it’s always been, going back to when joined the streaming community in 2014. “I would say it’s slightly better than when I was growing up playing Call of Duty,” she tells StyleCaster, “those lobbies were brutal, but I think if you if you really ask a wide variety of female streamers, especially the people that actually do this for a living, they will tell you that’s probably not the case.”

She doesn’t go into too much detail about this—frankly, we didn’t ask because it can unearth past trauma—but she has been in online multiplayer lobbies (which is a staging area for players until the game starts) for the first-person shooter game Counterstrike: Global Offensive (CSGO) where the group will “hear me talk on the mic and they’re like, ‘Oh, my god, is that a girl? Kick her out’.” 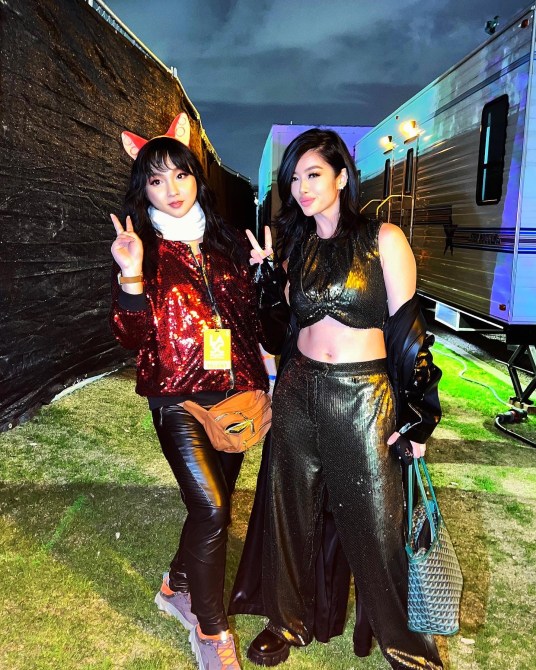 She doesn’t stream so much anymore, in fact, music producing and DJing have overtaken gaming on her list of creative priorities, though she still streams once a week because of her obligations with TikTok, though she’s found an ingenious way to combine the two. “I’m signed with TikTok as a gamer, so I have to stream gaming content and I use it to promote my music, so it’s cross-promotion, she says. “A lot of the music I make is gaming inspired. It’s great for gaming, and I want gamers to use my music.”

Freya Fox, real name Janelle Kao, now forges a successful career as a streamer and EDM artist, recording singles and playing festivals wherever she can—she recently made an appearance at the inaugural LA3C alongside headliners like K-pop group Seventeen and Snoop Dog.

I love everything about it. It’s hard to put into words but I would say there’s no other feeling. There’s no drug in this entire world that could ever replace performing live. I mean, at least for me—some people may think differently—but for me, there’s no other happiness in this world. That’s what’s really important; being happy and really loving what you do every day. I don’t know too many other mediums of art where you can get that kind of feedback. With the live performance, you are creating it live. A lot of DJs don’t, but I’m playing my instruments live and I’m singing live. So, feeding off that energy, it’s unlike anything else.

Do you have an on-stage persona?

I would say Freya Fox as a persona is not different from who Janelle is. It’s like 80 percent me and then 20 percent is exaggerated. I wouldn’t say that I become too different on stage. But in general, if we’re just thinking about my online persona, and who Freya Fox is as a brand, it’s definitely an amplified version of myself. I’m a true ambivert. I wouldn’t say I’m the most extroverted person, but I’m not the most introverted, either. When I’m performing, though I really connect with my audience. And that is truly me.

Where do you do your best writing?

My most creative is probably in the middle of the night, honestly. Definitely not live because I rehearse everything to the tee. I want it to be perfect and I want it to sync with the visual and that’s the most important thing—that it makes sense visually. I am playing things live and it is somewhat improvised, but it’s not to the level of jazz, obviously. My best writing probably comes in the middle of the night, randomly and honestly, it usually comes while gaming. And also when browsing TikTok and looking at new trends. It’s weird to say, but I honestly do try to write songs for TikTok and to write music that I think people can use in other mediums.

What improvements would you like to see the gaming industry make for it to be more welcoming?

I would say that a lot of gaming companies are very inclusive with their new characters. Especially Riot Games [developers behind League of Legends] has done a really great job with that, also Blizzard [developers of World of Warcraft]. But is that really helping the cause? Honestly, I think not. And think that, to a certain degree, it’s actually hurting us in a way, because of the backlash some people have to it; they feel like we’re shoving an agenda down their throat. Not every character has to tick a diversity box, you know?

Yeah. Are you just pandering to us? I want to make that really clear that it shouldn’t be just done out of nowhere. If you’re going to introduce a new character or a new concept, sure, add [diversity] to the story, but we don’t need every single new character to be that way.

This interview has been edited and condensed for clarity.