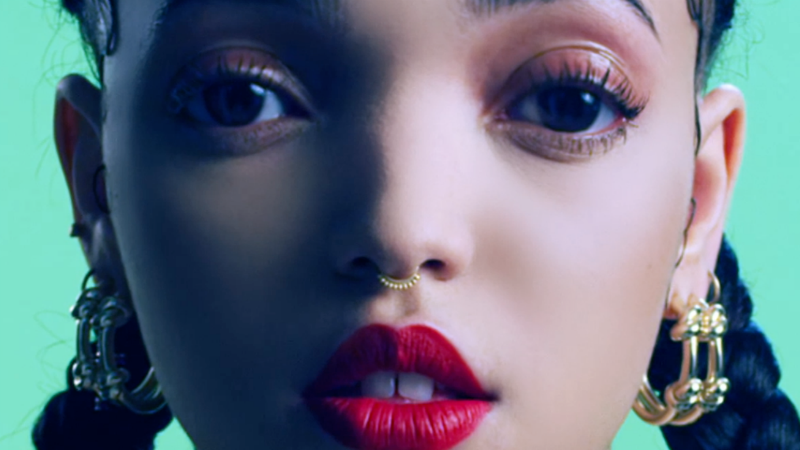 If you’re not one of the (many) fans of the mysterious, beautiful, and talented British singer FKA twigs, let us be the first to introduce you to the enigmatic It-girl that’s taking the music and fashion worlds by storm.

With her petite frame, big eyes and heart-shaped little mouth, she’s been (fairly) described as Betty Boop-like, Lolita-like, and—more than anything else—doll-like, an aesthetic she plays with very deliberately in her videos, which toe the line between pretty and macabre. Her 2013 hit “Water Me” captured the attention of both music and design fans for its look and sound, and now the singer is launching her first LP on August 12. The first song (and accompanying video) off the LP, “Two Weeks,” is a must-watch, with twigs playing the role of an Egyptian-inspired goddess. (Watch it below!)

She’s earned kudos for her haunting music, which synthesizes bedroom R&B and dance music in a way that feels utterly original, and manages to be both sexy and kind of creepy at the same time. Her lilting voice and pretty face are a perfect foil for her often ferocious lyrics and thumping beats.

Whether you’re just getting to know her, or awaiting her first LP with baited breath, here are eight things to know about the buzzy singer.

1. Her name isn’t FKA twigs.
Her real name is Tahliah Barnett. She got the nickname “Twigs” for the way her joints crack. She added the FKA to her name—which stands for Formerly Known As—when another artist apparently complained about her using the name.

2. She started her career as a dancer.
Twigs moved to London at just 17 to pursue a career in dance, but dropped out after five or six weeks to pursue her singing career. That said, she says she still practices on a regular basis—ballet as well as contemporary—and was even a back-up dancer for Jessie J (you can spot her in the video for “Do It Like a Dude”).

3. She’s a singer, but she’s equally focused on visuals.
For her debut EP in 2012, she created four dazzling and surreal videos to accompany each of the four songs. Ever since, she’s become as well known for her music as for her videos, which combine trippy visuals and haunting vocals to jaw-dropping effect. (It’s no surprise that the fashion and design community is obsessed.) Her frequent collaborator is filmmaker and artist Jesse Kanda, who helped create her hit “Water Me” video in 2013, which has now racked up nearly 3 million views on YouTube. She told Fader that the concepts for her videos often arrive at the very instant she dreams up the music itself.

Her latest video, “Two Weeks,” takes her dreamscape even further, portraying the singer as an Egyptian-inspired, futuristic goddess—directed by Nabil, with spectacular illustrations by Ignasi Monreal.

4. She grew up in rural Gloucestershire.
She may be a forward-thinking creative  now, but she grew up in a pretty rural county in England. In an interview with Pitchfork, she joked that the worst part of any given day would be “if you got stuck behind a tractor on the way to school.”

5. She’s surprisingly low-key in real life—she even watches trashy TV.
In an interview with New York Magazine, twigs revealed that she doesn’t exactly meditate when she’s not working—she watches regular TV like everyone else. “It’s really easy to project this whole ideology of what being an artiste is, and I’m just not down with intellectualizing it.”

6. She did little curls with the baby hairs around her face for years—though she’s done with the look for now.
She told New York that she uses a gel and comb to fine-tune the incredibly elaborate “S-curls” she used to do around her face—an homage to the late Josephine Baker.

8. She spent a few years on the London cabaret circuit.
She told Fader that her burlesque routine featured red lipstick, a ’40s-style hairdo, and a backless dress, performing Screamin’ Jay Hawkins’ “I Put a Spell on You.” “My cabaret character was someone much harder than I am, someone that could go and steal someone’s glass of wine and chuck it on them in rage, or someone that could climb over a table, or someone that could just be really daring in a way that no one ever got angry at her—I guess the side of womanhood that you would have always wanted to explore but rarely got the chance to,” she said.