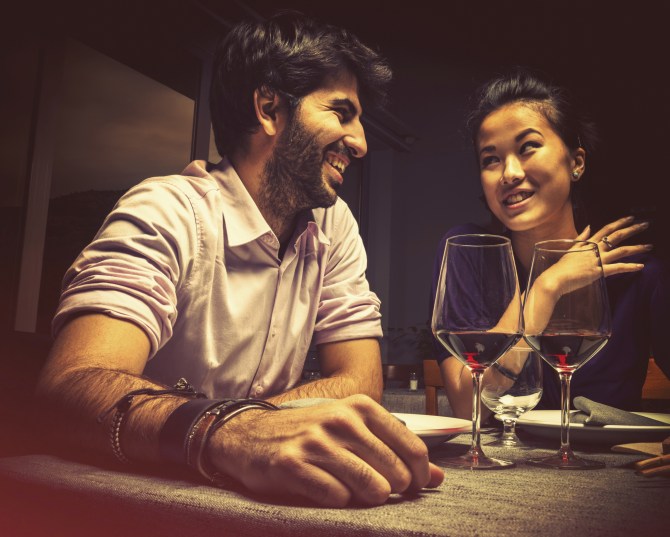 Carly Spindel has inadvertedly been in the matchmaking business since she was six years old. Now, she’s the vice president of Janis Spindel Serious Matchmaking Inc. (check them out at JanisSpindelMatchMaker.com!) and has “officially” been matching couples for four years.

On a first date, sometimes the conversation can get awkward—really awkward. That’s why it’s good to come prepared with a few things to throw out here and there to keep things flowing. These comments and questions will help a sister out. Even better, they’ll also help you learn a little about the guy in the process: win-win.

“You look great!”
Complimenting your date is a key icebreaker and, unfortunately, men don’t hear it as much as we do. Telling it to a guy when you first see him will help put him at ease and hopefully make things run more smoothly.

“So, you’re a [insert his job here]. What made you decide to go into that field?”
Yes, work is never going to be as fun as…pretty much anything else, but if he’s employed, he spends at least 40 hours a week doing something, and that’s a big chunk of time. People often have interesting stories about how they decided on a career field—maybe they were inspired by a family member or always kept coming back to that area. Regardless, there’s a story behind it. One thing to note: If he goes on and on about how he hates his job, but has zero plans to change things, that’s a red flag.

“I just caught ‘Gravity’ with a friend—we couldn’t stop talking about it afterward. What was the last thing you saw that grabbed you?”
This question opens the door for you to talk about the things that you have in common. Learning what your date enjoys watching should tell you more about them—can you both sit on the couch in sweatpants watching a movie or will you have to fight over the remote? Is he anti-TV? (If it’s the latter, that’s definitely a conversation starter).

“That [guy’s shirt/painting on a restaurant wall/whatever] reminds me of the time I [insert crazy story here]…”
Telling your date the craziest thing that ever happened to you is a great way to take the pressure off and open up. It also makes you unique. Don’t go overboard and share a Hangover-level story (although, if you have one, that’s kind of awesome), but stick to something light and funny.

“I read something online today about crazy lottery winner stories. It kind of makes you think—what would you do if you won?”
Yes, the lottery question is kind of cliche, but there’s a reason why it’s effective: It helps you find out more about a guy’s character without being obvious. Does he think his life would drastically change? Would he help out his family? Would he give money to charity? His answers will give you all kinds of insight.