If you want to know what the hottest men’s fashions are going to be for the next season, it’s best to go right to the source: the runway. Fashion week can give us a peek at the best men’s haircuts, too. The grooming experts backstage give these guys styles and cuts that complement the new clothes and feel super-fresh for the next season. It’s also a great way to see new styles for men with all hair types, textures and curl patterns so you can get some new ideas for your next barbershop or salon visit.

It might be tempting to look to celebrities for the best haircuts for men but have you noticed something about them lately? They all look alike. Aside from a few favorites like Harry Styles and A$AP Rocky who actually have fun with their look, lots of other male celebs are just kind of phoning it in. It’s like they all see the same West Hollywood hairstylist. (They probably do.) But if you look at the Men’s Fashion Week Fall 2020 in New York City, you’ll see creative takes on classic styles, such as a much cooler mullet and a bowl cut that looks nothing like the one your mom gave you.

These haircuts for men are pretty genderless, too. Not that any hairstyle is just for one gender but we want to steal fall’s most popular looks for ourselves more than ever. Some involve a bit of time in the morning to really make sure the style looks fresh but others are great for a quick wash-and-go lifestyle. There’s something for everyone. Whether you’re a guy looking for his next hairstyle or a woman trying to get their guy to get a new look, bookmark these trendy cuts to reference through the next season and beyond. 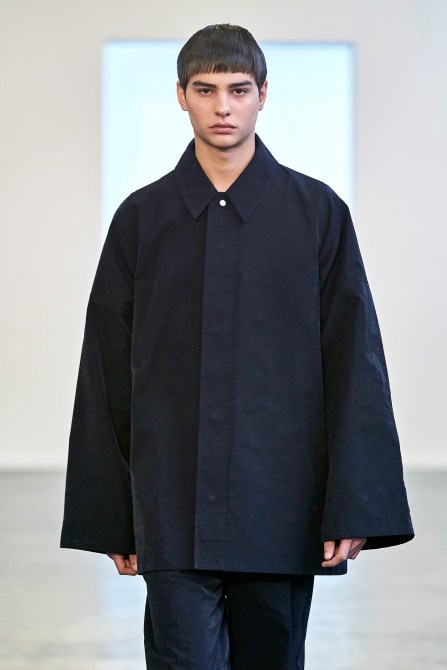 Designer Hyoungkee Kim sent models at his Keenkee show down the runway with all types of bangs including what looks like a 2020 take on the bowl cut. This men’s haircut in the front is straight across but rounds down longer around the ears. Female celebs have been playing around with this style, too. Even Charlize Theron gave a bowl cut a try and looks hot as hell doing it. Who would have thought we’d be loving the bowl cut in 2020? 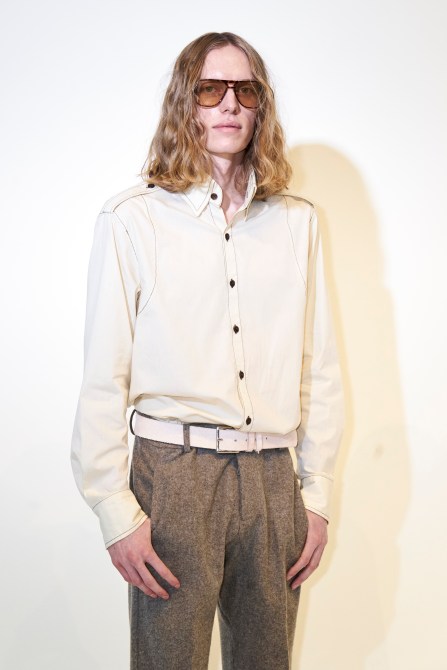 Guys with natural waves are embracing their texture this season and next—instead of cutting it all off or fighting against it. Models at the Carter Young show had perfectly bouncy, shoulder-length curls and waves. Although the brand’s designs are rooted in menswear, the unisex clothing is for all genders. That goes for the chic hair, too. With the best frizz-fighting products, curls look defined but laid-back. 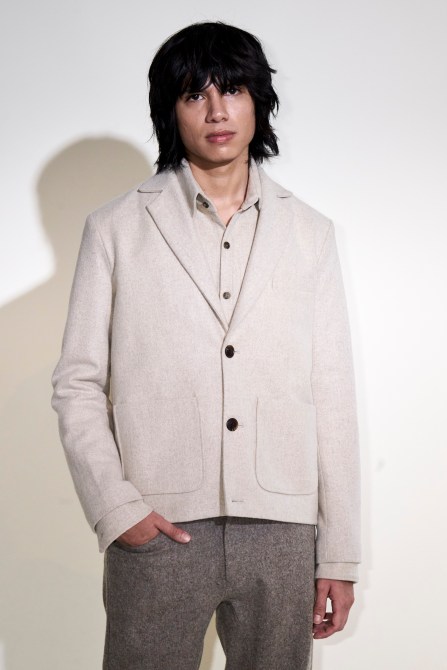 It’s business in the front and a party in the back. Carter Young models also went for a more modern take on the ’80s mullet, something even Miley Cyrus tried this year. (Before she went even shorter.) Here, bangs are long and straight and the rest of the hair is left shaggy and shoulder-length. The bangs can easily be side-swept as they start to grow too long. This men’s haircut feels pretty timeless and like it will always have a rockstar vibe. 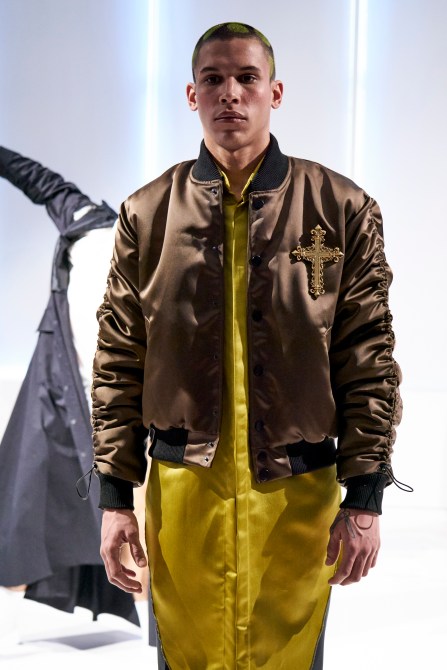 Prefer to let your scalp breathe a bit? Models at the Him NYC show, from designer Pablo Leon, wore their hair shaved but their looks were anything but boring. Here, a model’s ultra-short men’s haircut is dyed green in perfect circles, giving the whole look an animal-print vibe. It’s so cool and feels new for fall. 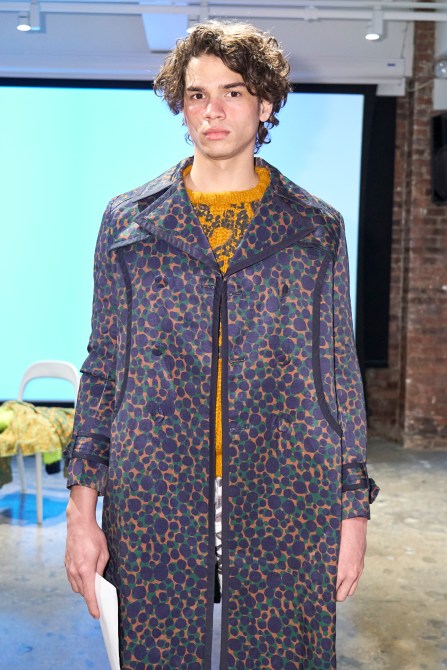 Those with curly hair don’t just have to part their strands in the middle. At the Ka Wa Key show from designer Ka Wa Key Chow, paired his gender-fluid clothes with side-swept curls. His men’s haircut is surprisingly long in the back, adding to the mullet trend yet again. If you’re not down with the mullet, keep the back shorter and pile the curls on top and to one side. 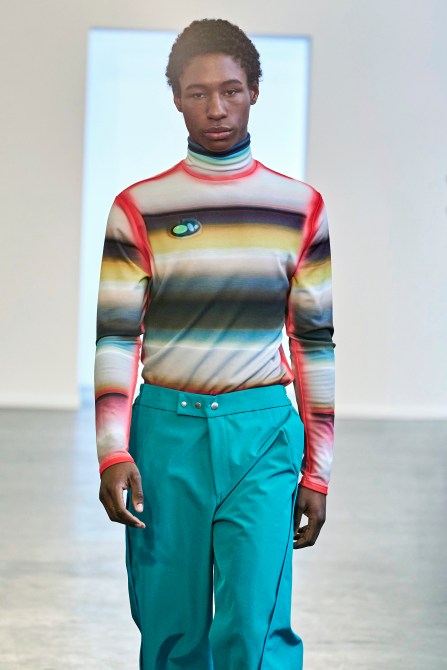 Afros never go out of style but the looks at the Keenkee show from designer Hyoungkee Kim felt especially fresh. The baby afro reigns supreme here. Guys are embracing their texture and curl pattern and using products that let their hair shine. 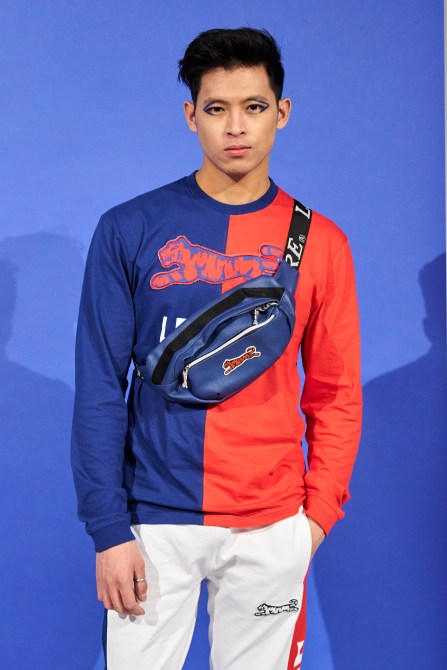 This classic men’s haircut got an upgrade thanks to a bouncy blowout that leaves strands full and thick. At the Le Tigre show, the first since the brand’s relaunch in 2019, models went retro with a twist. We love the way the classic, throwback hairstyles are juxtaposed with graphic eyeliner. 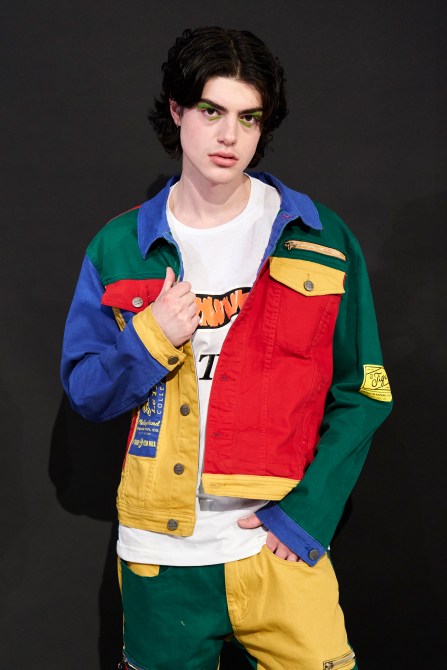 Channel your inner K-pop star with a men’s haircut the boys of BTS would love. Men at the Le Tigre show also took that same bouncy blowout and parted their hair in the middle. Again, this men’s haircut is long in the back. Sorry, you just can’t escape the mullet! 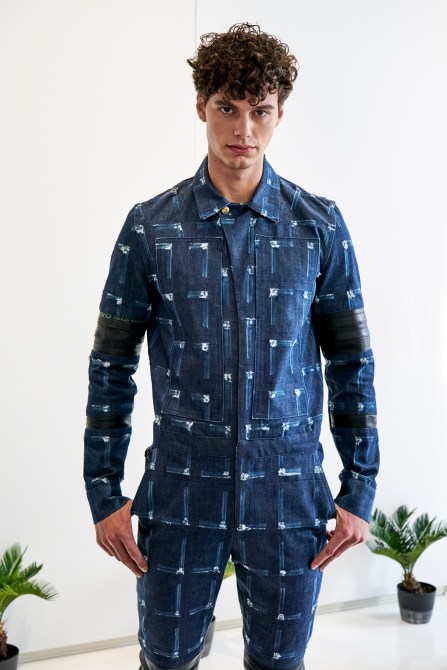 Okay, maybe you can get away from the mullet trend. Chop those long pieces in the back and pile your curls on top of your head like the models at Mined On Denim show. This men’s haircut is short on the sides and long on the top and in the front to really let the curls get some height. With the right products, curls are defined but never crunchy. 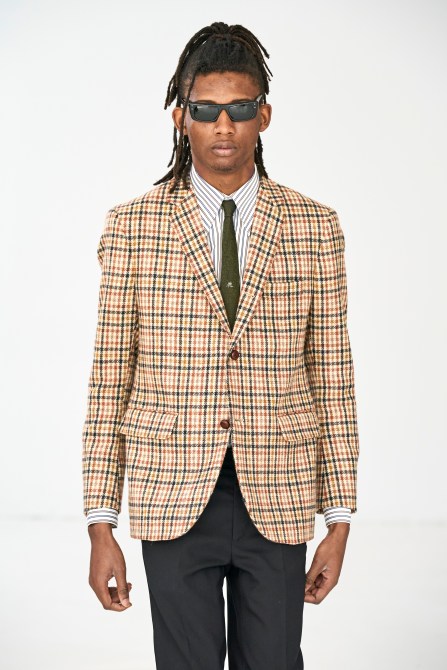 Medium-length dreadlocks continue to be one of the most popular hairstyles—and for good reason. There’s so much you can do with this length, including wearing it half-up like the models at the R. Mutt show. Again, they’ll never go out of style but instead, the fall of 2020 brings new ways to wear them.