Gwyneth. Jen. Angelina. Brad Pitt’s dating history needs no introduction. With more than 30 years as an actor, Pitt—who’s starred in films like The Curious Case of Benjamin Button, Fight Club and Ocean’s Eleven—has spent more than three decades wooing women in Hollywood. (He didn’t hold the title of People’s Sexiest Man Alive twice for nothing.)

But who have been Pitt’s girlfriends (and wives) over the years? Of course, as one of the most well-known celebrities in the world, most of us know a few members of Brad Pitt’s dating history. There’s his first wife Jennifer Aniston. There’s his second wife Angelina Jolie. But who were the women before and after his most high-profile relationships? This where our deep dive into Brad Pitt’s dating life comes in. Though Pitt is a household name now, that wasn’t always the case. It wasn’t until his big break in 1991’s Thelma & Louise that Pitt shot to the star level we associate him with today.

This means there was a whole side of Pitt’s dating life (pre-Thelma & Louise) that most of us don’t even know about. After his divorce from Jolie in 2016, the actor has also kept a low-profile when it came to his romantic relationships. So, without further ado, we present to you our deep dive into Brad Pitt’s dating history. 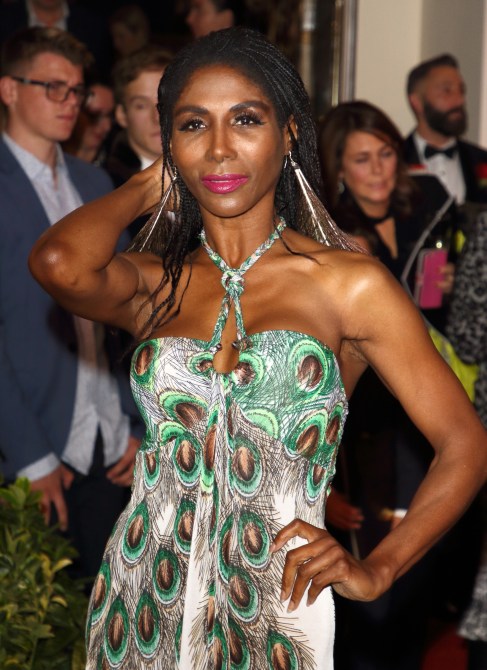 Pitt and Sinitta, a British singer known for the song “So Macho” and appearances on shows like I’m a Celebrity…Get Me Out of Here, dated on and off for two years between 1986 and 1988. While she was on I’m a Celebrity, Sinitta talked about her short-lived romance with the actor, who wouldn’t have his big break in Thelma & Louise until three years after their breakup.

“[He was] hot. He was beautiful with the most amazing body. I saw him for two years,” Sinitta said at the time. “He was fun, he was young and very sweet. It was before he made Thelma & Louise, but even I saw that movie and thought, ‘Oh my God, what have I done?’” 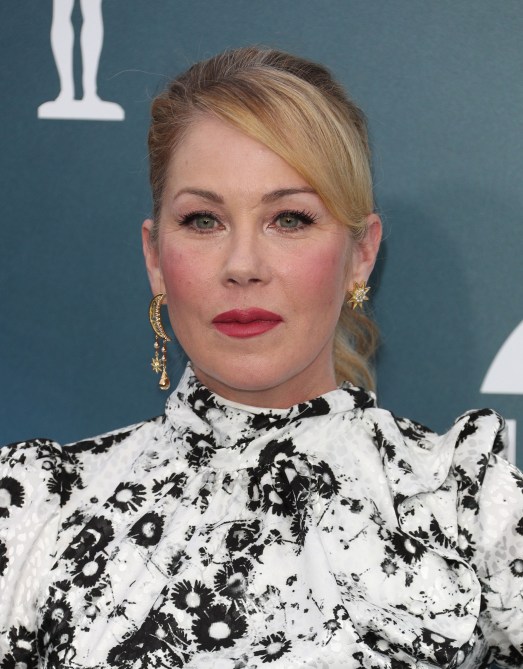 Applegate and Pitt didn’t have a long relationship. The two were linked when Pitt was the Samantha Who alum’s date to the 1989 MTV Video Music Awards. In a 2015 interview on Watch What Happens Live, Applegate was asked about reports that she left Pitt that night for another man, which she confirmed. Though Applegate didn’t reveal who the man she left Pitt for, she told host Andy Cohen that he wasn’t an actor. It’s believed that the mystery man is singer Sebastian Bach, though Applegate has yet to confirm this. 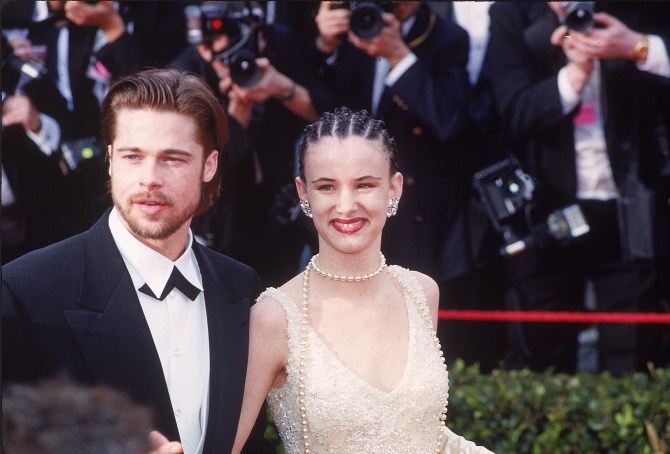 Pitt met Lewis on the set of the film Too Young to Die in 1990 when he was 27. Lewis, for her part, was 10 years younger than him. The two went on to date for three years and reunite on the 1993 film, Kalifornia. While promoting the film, Lewis told The Los Angeles Time that she and Pitt were in love. “We’re at the point in love, where we just like to see each other every single day and we don’t get bored with each other, so it’s really, really nice,” she said.

In a 2010 interview with The Huffington Post, Lewis looked back on her relationship with Pitt. “It amazes me that people are still fascinated that we went out for years,” she said at the time. “I was a teenager at the time. It’s a lifetime away. I was in my high school years, and it was a wonderful, loving relationship with a fun, smart guy. Then it was over, and he went on to become incredibly famous.” 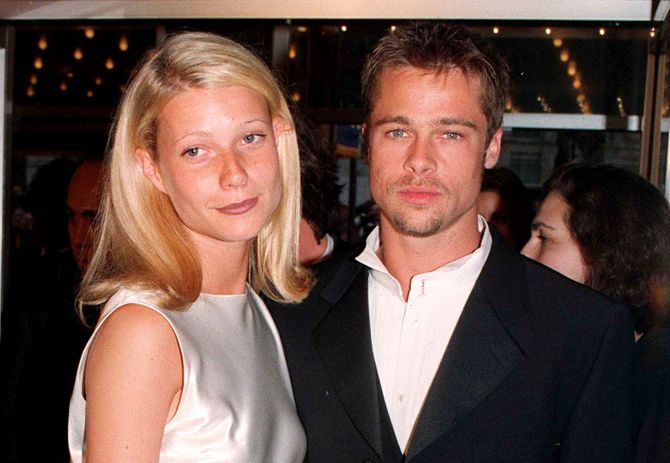 Paltrow and Pitt were an “It” couple in the ’90s. The two started dating after they met on the set of the film Se7en in 1994, three years after Pitt’s big break in Thelma & Louise. While accepting the Golden Globe for Best Supporting Actor for his role in 12 Monkeys in 1996, Pitt called Paltrow his “angel” and referred to her as the love his life. In 1996, Pitt also proposed to Paltrow, though the couple didn’t walk down the aisle.

In an interview on The Howard Stern Show in 2015, Paltrow opened up about her relationship with Pitt. “I definitely fell in love with him,” she said. He was so gorgeous and sweet. I mean, he was Brad Pitt! My father was devastated [when we broke up]. I was such a kid, I was 22 when we met. It’s taken me until 40 to get my head out of my ass. You can’t make that decision when you’re 22 years old. I wasn’t ready, and he was too good for me.” 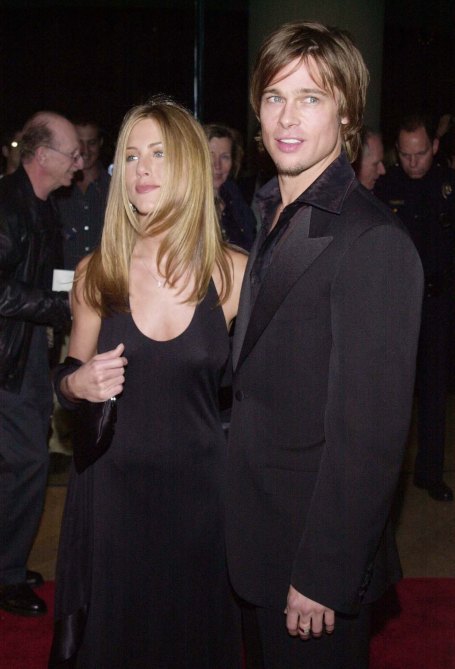 The one where he married Jen. Pitt and Aniston met in 1994 after they were introduced to each other by their managers, who are friends. “He was just this sweet guy from Missouri, you know? A normal guy,” Aniston told Rolling Stone in 2001. At the time, Pitt was dating Paltrow, so it wasn’t until 1998, a year after he and Paltrow had split, that Pitt and Aniston’s managers set them up on a date. “Primetime,” Aniston said on Diane Sawyers’ Primetime in 2004. “It was weird…That was a really easy evening. It was really fun.”

Pitt proposed to Aniston in November 1999 on stage at a Sting concert, and July 2000, the two tied the knot in Malibu, California. “I had those typical jitters the day before my wedding, but the day of, I was just excited in a good way,” Aniston told Rolling Stone in 2001 of their wedding. However, the marriage didn’t last. In January 2005, Pitt and Aniston announced that they had broken up, a year after rumors circulated that he had cheated on her with Angelina Jolie on the set of Mr. & Mrs. Smith in 2004. The two finalized their divorce in October 2005.

“We would like to announce that after seven years together we have decided to formally separate,” Aniston and Pitt said in a statement at the time. “For those who follow these sorts of things, we would like to explain that our separation is not the result of any of the speculation reported by the tabloid media. This decision is the result of much thoughtful consideration. We happily remain committed and caring friends with great love and admiration for one another.”

In an interview with Vanity Fair in September 2005, Aniston opened up about her split from Pitt. “We exited this relationship as beautifully as we entered it,” she said.

In January 2020—after Pitt’s divorce from Jolie and Aniston’s divorce from Justin Theroux—the two reunited for the first time in public at the Golden Globes. Their reunion came after reports that Pitt and Aniston started texting again and that Pitt had attended Aniston’s 50th birthday party in February 2019. Though the two went on to share a moment at the 2020 SAG Awards, where they briefly held hands backstage, the two didn’t reunite romantically. 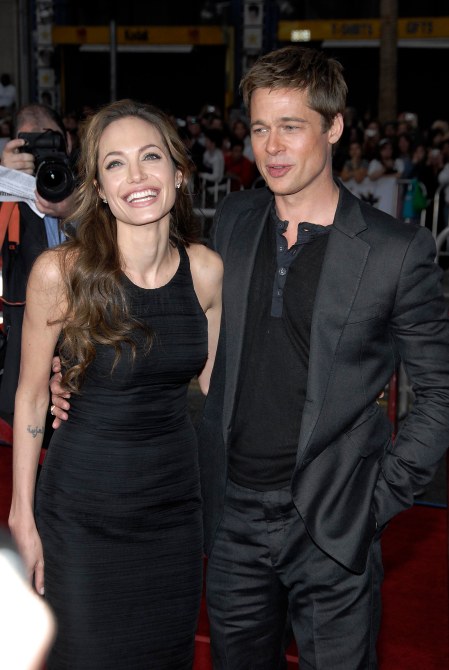 Pitt and Jolie met on the set of Mr. & Mrs. Smith in 2004, while Pitt was still married to Aniston and Jolie had just filed for divorce from Billy Bob Thornton. In a 2006 interview with Vogue, Jolie confirmed that she and Pitt had developed feelings for each other while working on the film. “I think we found this strange friendship and partnership that kind of just suddenly happened. I think a few months in I realized, ‘God, I can’t wait to get to work,” she said at the time. “It took until, really, the end of the shoot for us, I think, to realize that it might mean something more than we’d earlier allowed ourselves to believe. And both knowing that the reality of that was a big thing, something that was going to take a lot of serious consideration.”

In April 2005, Pitt and Jolie were photographed in Kenya with Jolie’s son, Maddox. Three months later, in July 2005, news broke that Jolie had adopted her daughter, Zahara, from Ethiopia, with Pitt by her side. In January 2006, Pitt and Jolie confirmed that they were expecting a child together. They welcomed their first child together, Shiloh, in May 2006. A few months later, in March 2007, Pitt and Jolie adopted a son named Pax from Vietnam. In May 2008, Jolie revealed that she was pregnant with twins. She welcomed the twins, Knox and Vivienne, in 2008.

After years of dating, Pitt proposed to Jolie in April 2012, and the two wed in secret in August 2014. However, by September 2016, news broke that Jolie had filed for divorce from Pitt. She asked for primary custody of their six children. As of 2020, the custody battle is ongoing. 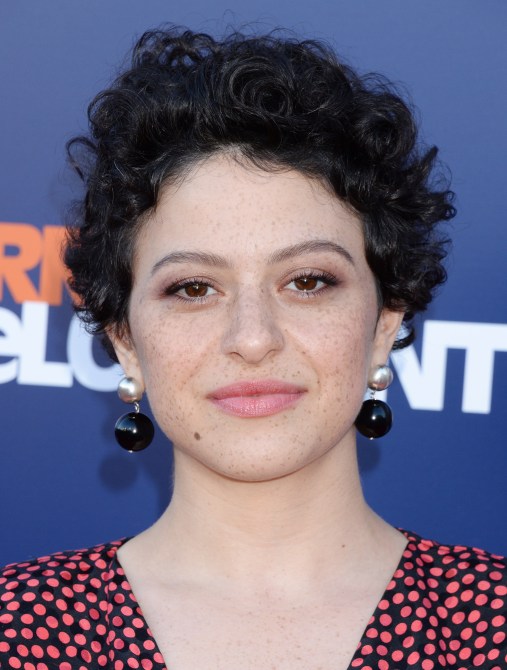 Rumors started that Pitt was datign Shawkat, an actor known for her roles on shows like Arrested Development and Search Party, in 2019 after they were seen on a date at an art exhibit in Los Angeles. However, in an interview with Vulture in June 2020, Shawkat confirmed that she and Pitt are not in a romantic relationship. “We’re not dating,” she said at the time. “We’re just friends.”

Pitt and Poturalski, a German model who is 29 years younger than him, were first photographed in November 2019 at a Kanye West concert in Los Angeles. However, it wasn’t until August 2020, that the two were confirmed to be dating after they were seen traveling together to Pitt’s chateau and winery that he owns with his ex-wife, Jolie, in the south of France. The Daily Mail also reported in August 2020 that Poturalski was married to German restauranteur Roland Mary at the time of her relationship with Pitt, however, the two have an open marriage and her husband isn’t “jealous.”

“They are still married, but you could describe their relationship as an ‘open marriage,'” a source told The Daily Mail at the time.