There are plenty of valid (or at least understandable) reasons to want to move to Canada right now: There’s the foxy prime minister, Justin Trudeau, who seems to spend his off-hours wandering around shirtless; Drake’s done a damn good job as the unofficial ambassador of The Six (Toronto, that is); and America’s current political climate is like something out of “The Day After Tomorrow.” I get it—I really do.

One case for relocating that doesn’t get quite enough credit, however—at least as far as this Canadian expat is concerned—is the cuisine. Not the Michelin-star kind (although we have that, too), but rather the kind you pick up at a gas station, grocery-store junk-food aisle, or the checkout line at your local Shoppers Drug Mart (think Walgreens, but friendlier).

So, on a quest to bring back some of the delicacies of the North—and foist a few of them on my coworkers—I took a cue from our other hunger-inducing deep-dives into the worlds of British and Australian snack foods and rounded up 12 essential Canadian candies, chocolate bars, chips, and more. The best part? You can enjoy these regional delicacies without hopping on a flight thanks to Amazon Prime. You’re welcome. 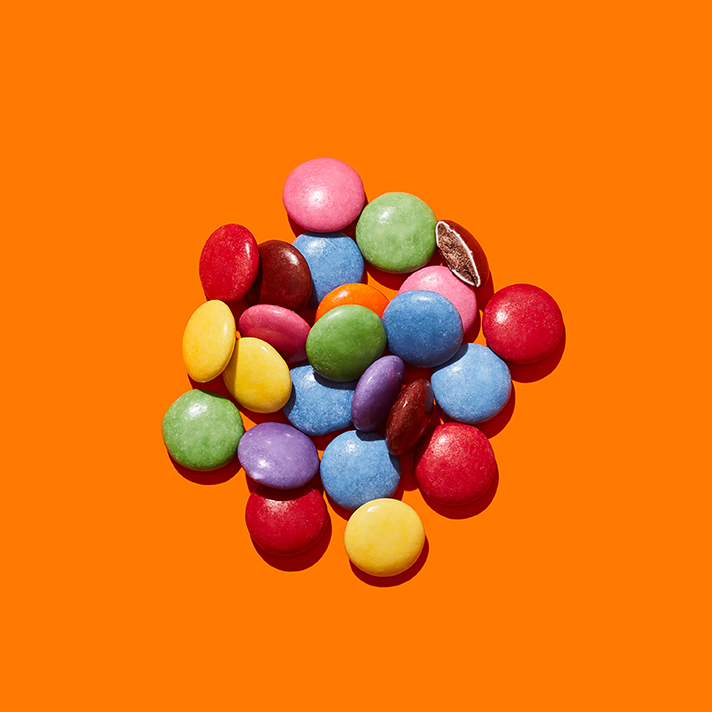 Not to be confused with American Smarties—the rolls of sugar tablets known in Canada as Rockets—these colorful chocolate candies bear some resemblance to M&Ms, but with a thicker, crispier candy shell, larger size, and, unsurprisingly for a Commonwealth country, British heritage. Introduced in 1937 and still sold around the world—with the exception of the States—Nestlé’s Smarties have long been a favo(u)rite of trick-or-treaters, candy purists, and anyone who likes to play with their food. (As the classic jingle goes, “Do you eat the red ones last?”) They aren’t precisely the same as the kind you’d buy in the UK (across the pond, the orange Smarties have orange flavoring, for one), but they’re pretty close. 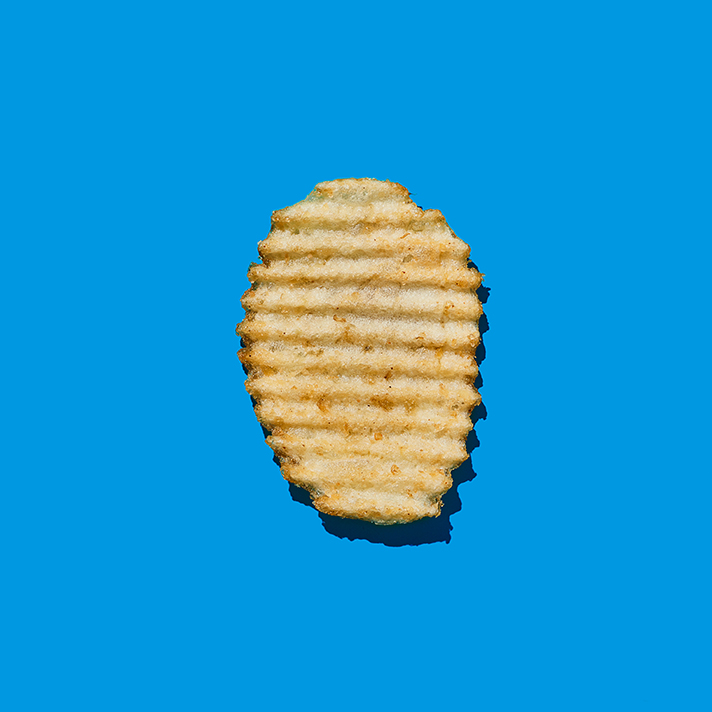 It still boggles my mind that much of America will never know the joy of all-dressed. With the kick of barbecue, the tang of sour cream and onion, and the addictive acidity of salt and vinegar, they have everything you could possibly want in a potato chip—and while that sounds like a lot going on, I’ve yet to meet someone who isn’t pleasantly surprised when they first try them. One thing to note, though: You must opt for Ruffles if you’re getting all-dressed. Don’t ask me why; just do it—you won’t regret it. 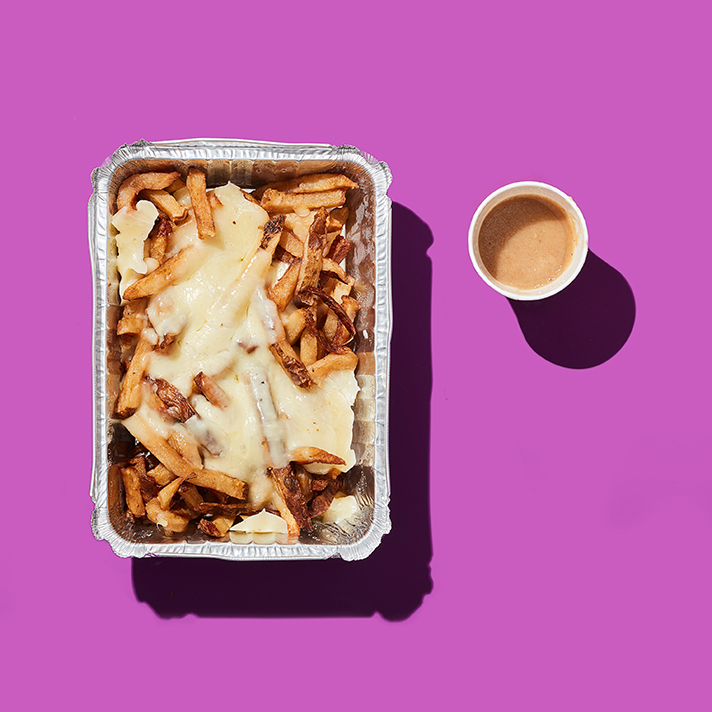 Ah, poutine: the most quintessential of Canadian snack foods. Best enjoyed after a long day of skiing or an even longer night of Fireball shots (another Great Canadian Invention—you’re welcome, college students), the dish features french fries smothered in melted cheese curds smothered in brown gravy. And while Canada’s poutine consumption may seem like one of those stereotypes that’s exaggerated for humorous effect, like that whole oot and aboot thing, I went to a music festival in Ontario once and counted at least 12 different food carts serving the national delicacy. So, yeah, we like it a lot. (Just don’t talk about calories while you’re eating it, capiche?) In New York and New Jersey, I’ve seen similar dishes referred to as “disco fries,” but don’t be fooled: these are usually just cheese fries with some gravy on top—and American cheese definitely has no place in poutine. No offense, just relaying the facts.

The poutine above was purchased from Mile End Deli, a Montreal-style delicatessen in NYC. It also offers a version with smoked meat, as well as a series of chef-designed variations during its biannual Poutine Week (chilaquiles poutine, anyone?) I suggest bringing along a friend or five if you plan on ordering any of these. For a similar flavor that’s a bit more convenient for non-Canadians to get their hands on try the snacks below instead. 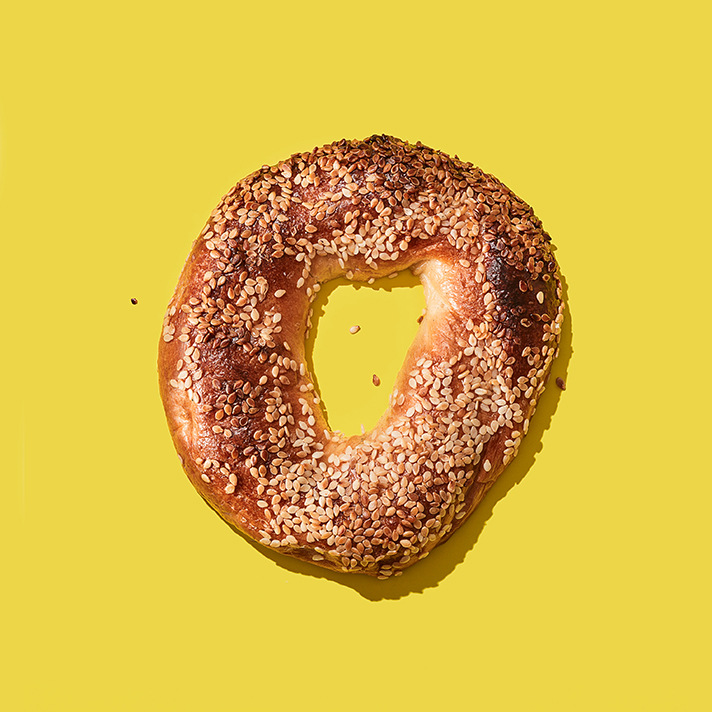 Let’s get this out of the way (even though they might yank my New York City resident card for saying it): Montreal-style bagels are the best bagels, hands down. They’re chewier, denser, and less doughy than the NY version, as well as slightly sweeter—in a good way, I swear—thanks to the honey-sweetened water they’re boiled in before baking. A fresh Montreal bagel is just as satisfying on its own as it is topped with a schmear and some Nova Scotia lox, and thanks to its smaller size, you probably won’t even need a nap immediately after eating one. Technically, the bagel above is a hybrid, concocted by the folks at Black Seed Bagels in the East Village (the proximity to which may or may not have come into play when choosing my current apartment)—and the crisp exterior is a result of the wood-fired oven the bagels are finished in.

You obviously can’t buy these delicious bagels online, but you can get the flavoring to add to your regular bagels, toasts, and other bread items. 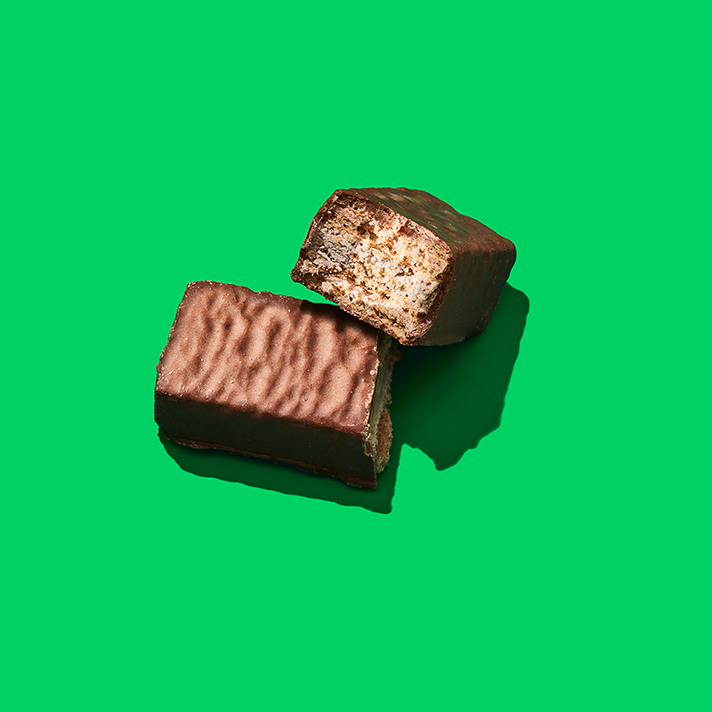 This is one of the most popular chocolate bars in Canada, and while it’s available at just about any gas station or corner store, there’s something slightly sophisticated about it: The crispy wafers and milk-chocolate coating have the effect of an elevated Kit Kat bar, but the layers of coffee-flavored cream take it to a whole new level, especially for anyone with a caffeine craving. Back in 2006, a group of Americans successfully petitioned Nestlé to distribute Coffee Crisp throughout the US, but the marketing push wasn’t as successful as they hoped, so now fans have to get their fix via Amazon. 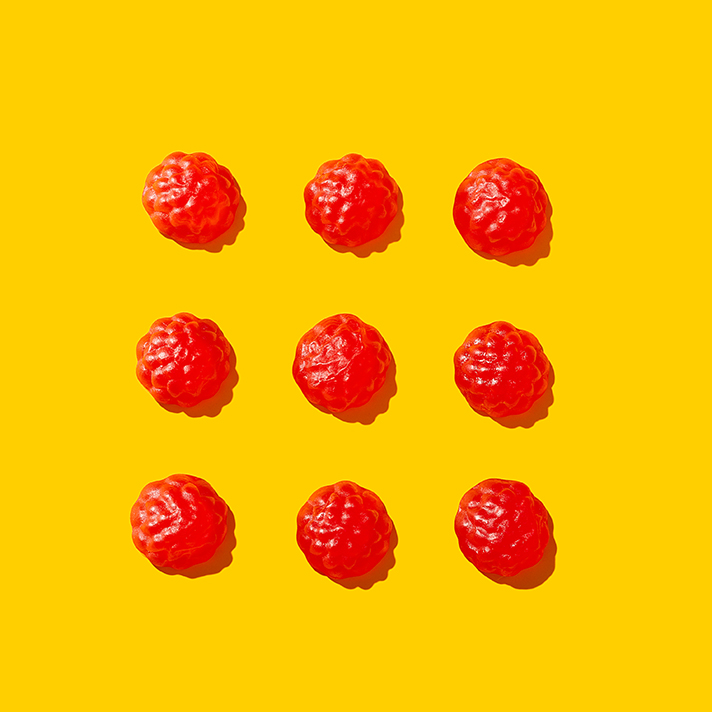 Like Swedish Fish but so much better, these little guys prove that shape can and totally does have an impact on taste (the same theory that most cereal and gummy manufacturers probably rely on). The pillowiness of the berries makes them less chewy and more snackable than their aquatic counterpart, and my coworkers backed me up on their deliciousness. 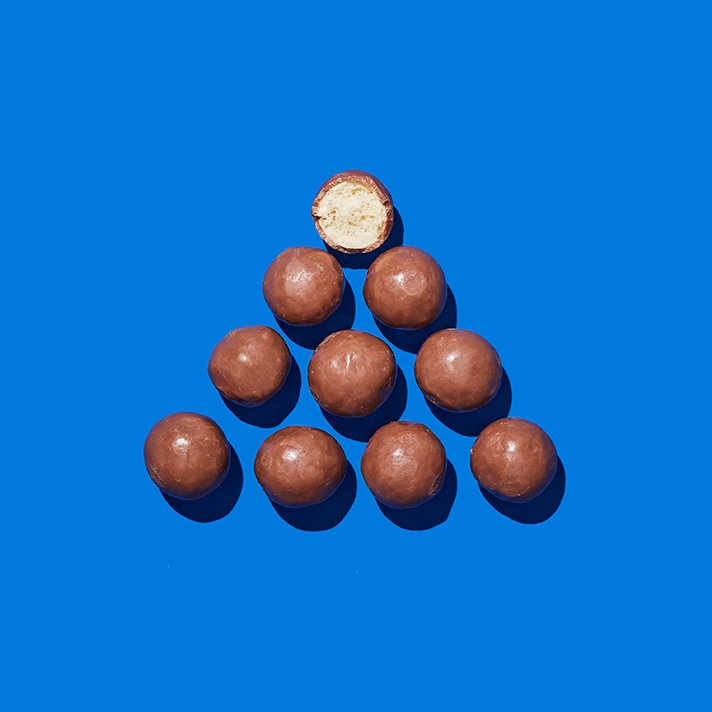 Maltesers are probably the only chocolate snack I’d consider as an alternative to movie popcorn. The fizz of the malted honeycomb center is addictive in the way that popcorn is addictive, with a bit of action in each bite. Most of my American colleagues pointed out the resemblance to Whoppers, Hershey’s “original” malted milk ball (whatever, guys), although they also said they preferred the lightness of the Canadian version. If you really want to compare and contrast, some dude on YouTube has done some serious investigation into the topic, complete with malt-ball dissection, taste-testing, and ingredient-inspection. (His verdict? “They’re totally different.” High five!) 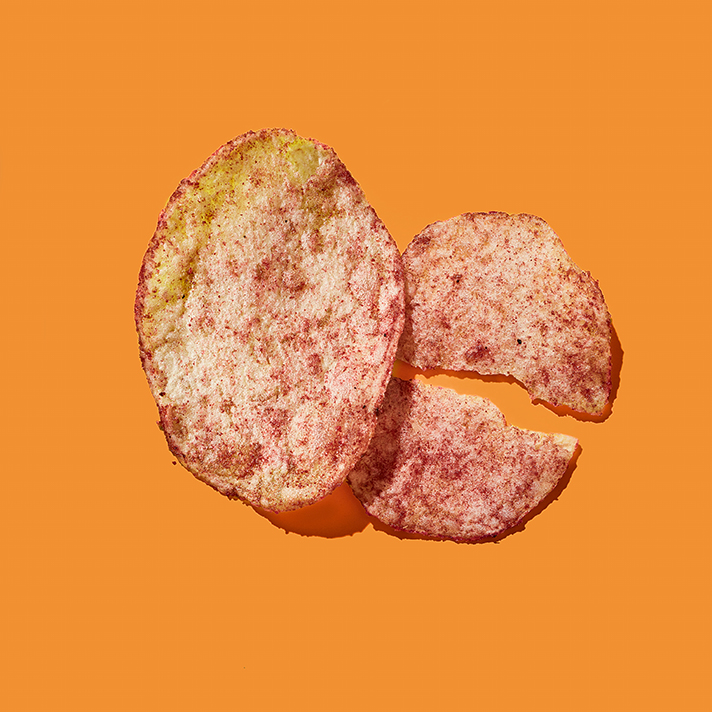 I may have been the only kid in my elementary-school class that didn’t go nuts for this flavor, so I was a little wary at first of tasting it again as an adult. They’re better than I remember, though, with a pleasant complexity and a hint of cinnamon that’s mysteriously nowhere to be found on the label. Decidedly more divisive than all-dressed among an international audience, ketchup chips will probably never be as beloved as their namesake sauce south of the border, but they’re popular enough among Canucks that I’m sure at least some Americans would find they’re love at first bite. 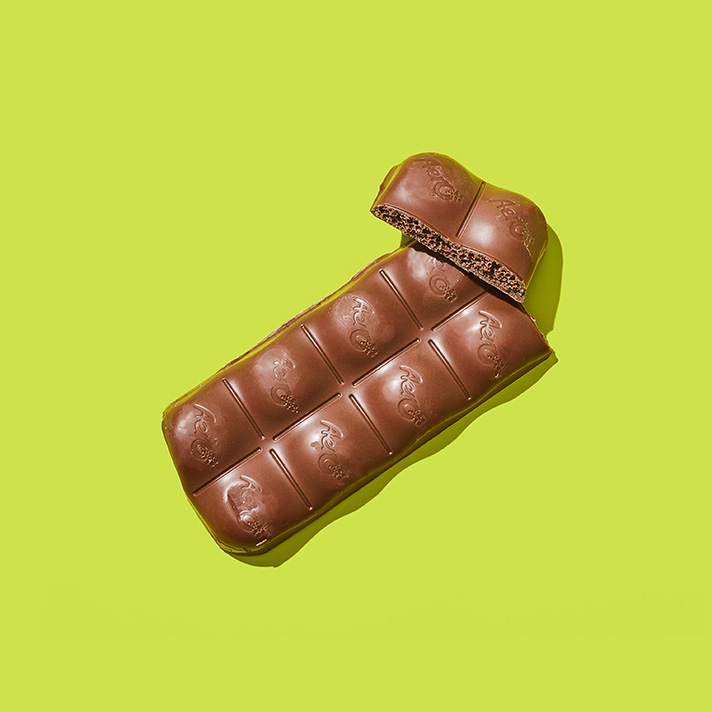 I’m not going to lie: I’m a little weirded out by the bubble-shaped bar above, since the Aero of my childhood came in rectangular segments—more like a Kit Kat, say. I suppose the redesign makes sense, though, considering bubbles are really Aero’s thing. The bar’s slogan is “Feel the bubbles,” and the ad campaigns always featured some chocolate rube (a parent or teacher, usually) experiencing the sensation of the chocolate melting in their mouth for the first time. In truth, it isn’t that dramatic, but the airy, bubble-filled center does ensure an enjoyable, no-frills experience. The candy bar has spawned many elaborate treats over the years—Aero mousse, caramel Aero, Aero instant hot chocolate—but the only ones I can really advocate for are the mint and chocolate-orange versions. Can’t go wrong there. 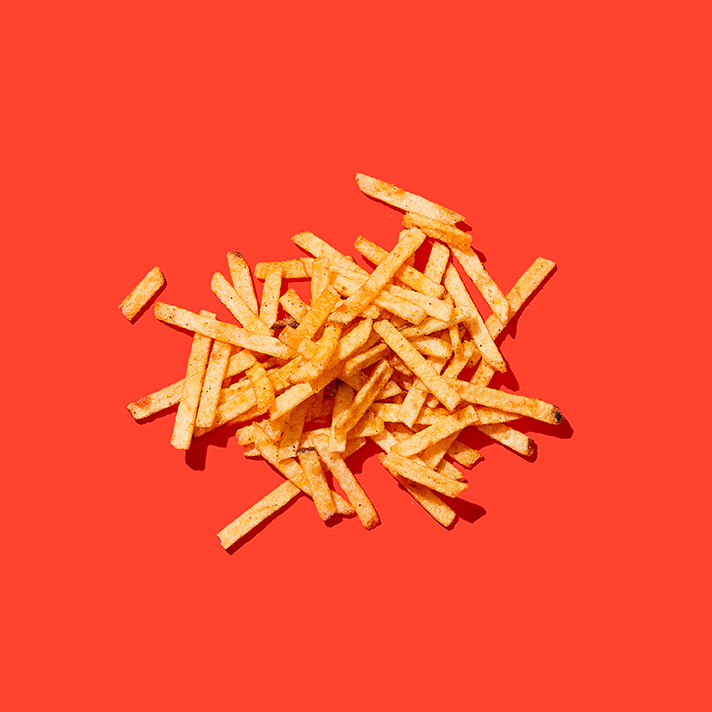 Mmmm, smoky. I’m not sure who decided to take the concept of potato chips and make them into teeny-tiny strips, but I’m very glad they did. Hickory Sticks were my go-to growing up, not least because they took about three times as long to finish as a bag of regular chips, ensuring you’d still be snacking long after your friends had finished their Lays (#snackhacks). The hickory flavor holds up as a grown-up, too—and even though I can see words like monosodium glutamate and corn maltodextrin on the label, the discernible potato taste makes these seem somewhat healthier. Who knows. 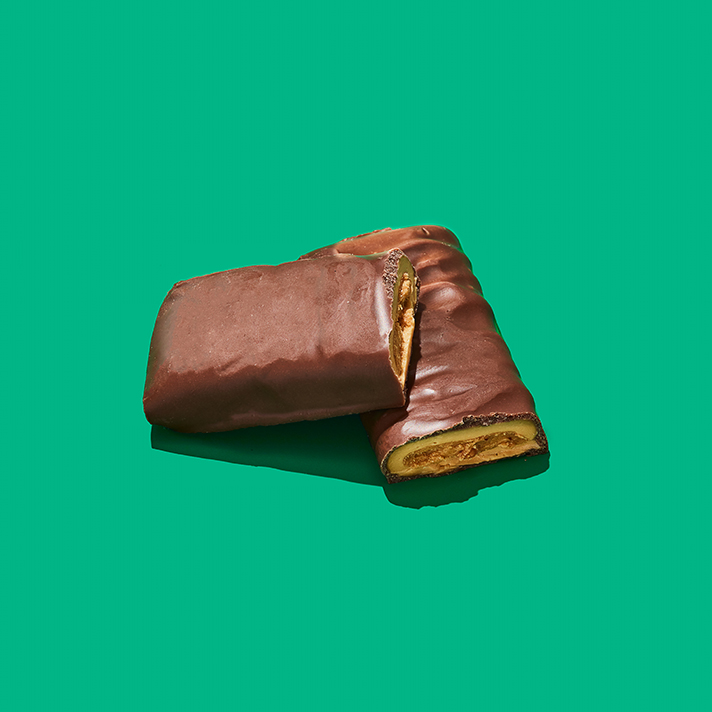 These are along the lines of a Butterfinger, but thinner, crispier, and ever so slightly peanuttier, with a chewy candy coating surrounding the flaky center. Hella sweet, if you’re into that kind of thing. (And I didn’t find anyone complaining.) 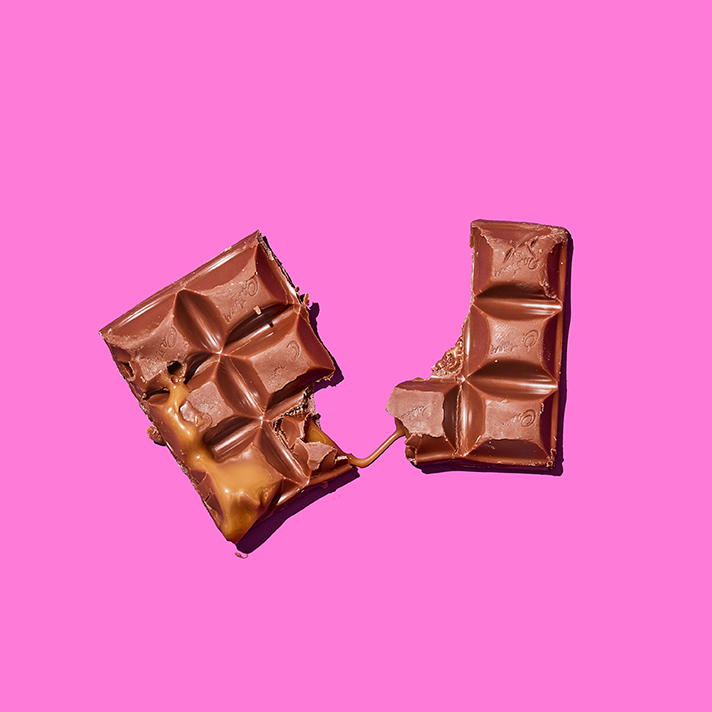 Delicious pockets of gooey caramel encased in milk chocolate—what more is there to say? Well, you might be surprised to hear that how Cadbury gets the caramel inside the chocolate pockets is, in fact, one of Canada’s greatest mysteries (or at least one of its greatest marketing campaigns, since the company has been running campaigns about the “secret” for more than 40 years). I’ve heard rumors of freezing, injecting, enzymes, and specially designed molds—but no need to overthink it: All you really need to know is it tastes like little squares of heaven.

A version of this article was originally published in August 2016.