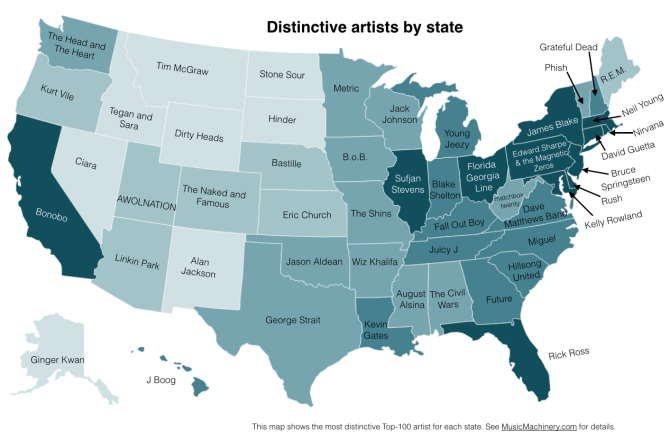 New data published by music intelligence company The Echo Nest has recently determined each state’s favorite musical act, and in doing so, they’ve confirmed what we already knew to be true: New Jerseyites really love them some Bruce Springsteen.

Paul Lemere, the director of developer platform for The Echo Nest and the music blogger behind Music Machinery, analyzed data from sources such as MTV, Spotify and Rdio to determine the “most distinctive” act to each state. It’s important to note that “most distinctive” is how he’s describing each choice as relative to the choices of other states (those listened to proportionally more frequently in a particular state), which is why no two states boast the same favorite act.

Lamere explains further on Music Machinery, where you can read all about his methods. He also includes a handy link to an app which lets you compare the preferences of two different U.S. regions.

Looking at Lamere’s map, the choices of certain states seem to make perfect sense (Vermont is into Phish, Texas digs George Strait), but some are a bit more surprising. For instance, Nirvana listeners are more distinctive to Rhode Island than Washington (?) and, ironically enough, Ohio residents are bigger fans of Florida Georgia Line than actual Floridians or Georgians.

To read this original story, head over to Fox News Magazine.