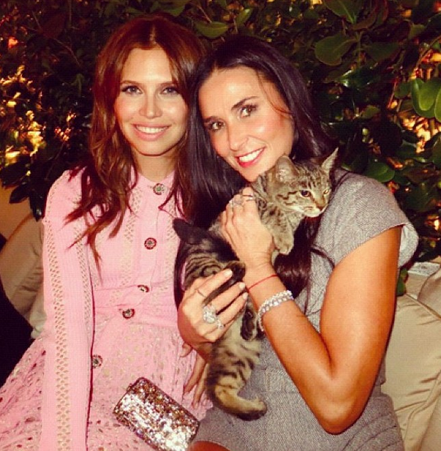 What is it about cats and fashion? First, Karl Lagerfeld‘s feline companion, Choupette, spawned photo spreads, magazine interviews and Twitter accounts. Meanwhile, Kim Kardashian carried around her cat, Mercy, like it was a Chanel 2.55 until allergies forced her to give it to her sister’s assistant (before it passed away last weekend). Then Grumpy Cat became an Internet sensation, and recently posed in United Bamboo.

Now, it seems yet another cat is making waves with the style set, after emerging at last weekend’s Art Basel festivities in Miami. A stray cat named Soho—whose place of origin is still unknown—managed to social-claw its way into some of Basel’s hottest parties and rubbed elbows with some of its most famous faces.

First sighting: The feline’s first appearance was at the swanky Soho Beach House, after actress Demi Moore scooped it up and brought it to the exclusive Chanel dinner, where she kept it on her lap and fed it pricey grub as she chatted with Dasha Zhukova, Wendi Murdoch and Lenny Kravitz. Later that night, Moore kicked off her heels and dirty danced in her Chanel romper (perhaps in response to her break-up with 26-year-old art dealer Vito Schnabel), so the cat was left alone again.

Cat, meet the Hiltons: Lucky for the kitty, it was picked up the next day (also at Soho Beach House) by socialite sisters Nicky and Paris Hilton. Nicky christened the cat Soho, and has made it her own.

When it came time to head home after Basel, Nicky took Soho on a private plane back to New York with a slew of high-profile passengers including Kanye West, Scott Disick and socialite Dori Cooperman. (Side note: Anybody else confused that the Kardashian men were with a Hilton?!) Soho is now perfectly comfortable living at Nicky’s, as she recently tweeted a picture of the cat getting comfortable on her laptop.

With private jets and a Chanel dinner under its belt, this cat is more upwardly mobile than most New Yorkers about town!