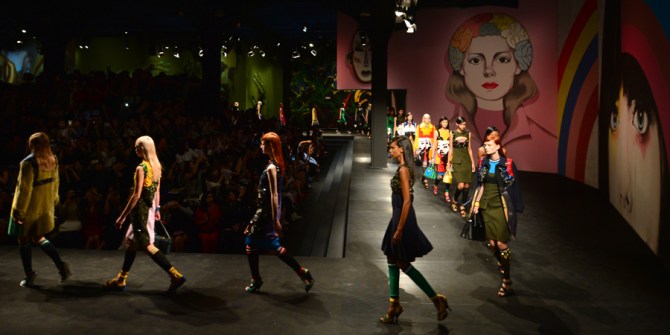 As anyone who follows fashion knows, designers have faced increasing criticism in recent years over the lack of diversity on Fashion Week runways. Well—according to a new assessment by The Diversity Coalition, led by former model Bethann Hardison—things might be finally looking up.

MORE: Front Row Politics: How It’s Decided Who Sits Where at Fashion Week

The Diversity Coalition analyzed the February 2013 New York shows, and noted some major improvements. Calvin Klein Collection, for instance, had five models of color in its September show, versus zero in February 2013. Likewise, Narciso Rodriguez and The Row also increased the number of non-Caucasian models from zero to four. In fact, the only label that showed in New York that didn’t use any models of color throughout the entire 2013 season was MM6 Maison Martin Margiela.

MORE: What Does Marc Jacobs Eat During Fashion Week?

In a letter sent to the Council of Fashion Designers of America’s [CFDA] President Diane von Furstenberg and CEO Steven Kolb, The Diversity Coalition wrote: “The objective is to continue this improvement across the entire industry. We look for consistency and not because of advocacy or a season lending to darker skin. We will continue to watch and reveal season to season.”

The letter cautioned: “It is important to say that there are design houses serviced by casting directors and stylists who are latent, as they seem comfortable with stereotypical images.”

The fashion industry has been under fire for years for the lack of models of color on the runways—but for the most part has seemed uninterested in changing its ways. Then in September 2013, Hardison fired off an open letter to the CFDA, the British Fashion Council, the Fédération Française de la Couture of France, and the Camera Nazionale della Moda Italiana of Italy, calling the practice racist. “No matter the intention, the result is racism,” she said.

Somali-born supermodel Iman told Good Morning America: “There were more black models working [in the ‘70s], than it is happening in 2013.”

There did seem to be a welcome tidal shift with the Spring 2014 collections, which shown last September (conveniently coinciding with the bad press.) Rick Owens, for instance, decided to forgo models and instead cast his show with step dance team “sorority sisters” from New York and Washington DC, mostly of color. The show not only received a massive amount of press, but it also brought some audience members to tears.

With New York Fashion Week kicking off Thursday, industry watchers are keen to see if this focus on diversity will make more lasting inroads.

Do you think Fashion Week is doing its part to diversify, or is there still a long way to go? Sound off below.