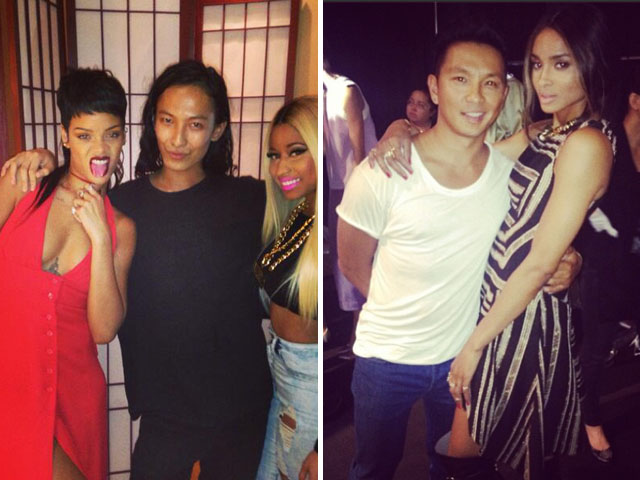 Sure, designers care a heck of a lot about getting a good review in WWD following their fashion week shows, but almost as much, many seem to be competing over who can throw the best after-party. Two of the biggest designers of New York Fashion Week, Alexander Wang and Prabal Gurung, had competing after-parties this weekend. Who came out on top of the after-party war? We investigate.
ALEXANDER WANG
Venue: Pier 17 and two floors of the touristy South Street Seaport Mall, which is about to close.
Theme: The bash had Shibuya-inspired fun house theme. Think nail salon, video games, black lights, and all of the Hello Kitty swag that you could carry.
Guest List: A$AP Rocky, Rihanna, Solange Knowles, Brad Goreski, Tyson Chandler, Georgia May Jagger, Joan Smalls, Oh Land, The Brant Brothers, and so many others.
Entertainment: Nicki Minaj performed her hit “Starships.”
PRABAL GURUNG
Venue: Bar Naná in the Meatpacking District.
Theme: No specific theme, though electronic cigarette maker Njoy partially sponsored the affair, and were passing out e-cigs.
Guest List: Chelsea Leyland, David Rabin, Ciara, Julie Henderson, Lily Kwong, and the Jonas Brothers.
Entertainment: Ciara performed. The best part? Gurung dancing alongside her.
THE VERDICT: While Prabal Gurung certainly made a strong attempt, you can’t really compete with an Alexander Wang after-party. This is a designer after all who once threw a party at a gas station, and made it one of the most talked about affairs of fashion week that year. Better luck next season Gurung.
MORE:
Insider Tips On How To Crash Fashion Week Parties
Just Opened Hot Spots: Where to Go During New York Fashion Week