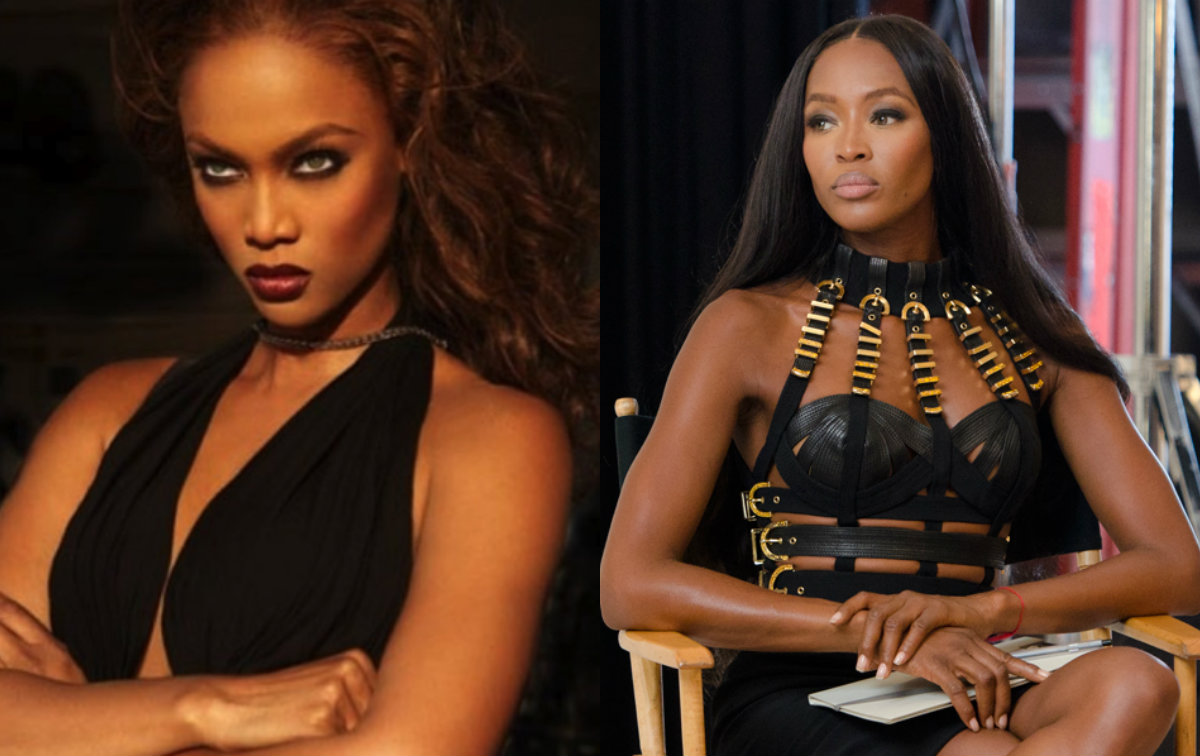 The fashion world and the folks that populate it are certainly fabulous and glamorous—but no one ever said they were nice.

That fact is clearly evidenced by the seemingly endless string of deliciously nasty catfights that occur within the fashion industry at all times. Just this week, a story broke that Luo Zilin, an aspiring model who earned her stripes on reality competition show “The Face,” had betrayed her former mentor Naomi Campbell by getting together with her ex-boyfriend. Drama!

Now, Zilin is jobless—her modeling agency gave her the axe (probably at Campbell’s request)—and another hopeless victim of a fashion catfight.

Naturally, the Naomi-Luo scoop got in the mood, so we’ve compiled a list of the 8 biggest catfights ever for your enjoyment. Read on and let us know which was the cattiest of all!

1. Naomi Campbell vs. Luo Zilin
The legendary Naomi Campbell mentored Zilin, an aspiring 25-year-old model, on her Oxygen reality show “The Face.” Yesterday, photos popped up of Zilin with Campbell’s married ex-boyfriend Vladimir Doronin (they broke up last month!) canoodling in Ibiza. Bad move, as Zilin got the boot from her modeling agency.

2. Naomi Campbell vs. Tyra Banks
What? You thought Campbell would just be on this list once? The Campbell-Banks rivalry has been a part of the modeling industry for years. In fact, the two even sat down in 2005 for a TV discussion where they addressed their longstanding feud. Banks addressed a situation in Anguilla at a photoshoot many years ago, where Campbell had her thrown off the set because she didn’t like her presence.

Campbell also reportedly told Banks, “You’ll never be me, don’t ever think that you’ll be me” backstage at a European fashion show. By the end of the show, they made peace, with Campbell stating, “However I’ve affected you or you’ve felt that I’ve affected you I take my responsibility, I must say I’m very proud of you. You’ve been a powerful black woman… Please continue.” Recently, their feud was said to have resurfaced due to Campbell breaking into the reality TV realm—which was generally considered Banks’ territory due to her longstanding show “America’s Next Top Model.”

3. Jourdan Dunn vs. Chanel Iman
Models Chanel Iman and Jourdan Dunn seem to have a lot in common—they’re both young African American beauties who’ve made waves in the industry. But even though they posed together on a memorable 2009 issue of Teen Vogue, it wasn’t always sunshine and rainbows between the two.

“I could sit here and tell you, ‘I love Jourdan! We’ve always been the best of friends! “But we haven’t,” Iman told the magazine. “Until recently, we barely even spoke. We went from being super-close in the beginning to dead silence if we saw each other backstage at a show.”

They said they were made to hate each other by other models and casting directors. “You’re being told, ‘So and so is only booking one black girl. It’s either you or Jourdan,’ So we’ll be sitting in the lobby looking at each other like, ‘Okay, I want this job, and she wants it too. Which one of us is going to get it?'” Iman said. They’ve since buried the hatchet and seem to be happily coexisting in the unfortunately prejudiced world of modeling.

4. Rachel Zoe vs. Brad Goreski
It’s a stylist showdown! A few years ago when he was working as her styling assistant, Goreski and Zoe were two peas in a stylish pod—until he went out on his own and stole some of her high profile clients in the process like Demi Moore and Jessica Alba. Zoe felt betrayed, and stated, “It’s not the first time I’ve been used. I would say it’s going to be the last time, though.” Goreski denied any wrongdoing, but the two have yet to reconcile and there have been reports of snubbing at fashion shows. Even more awkward? Zoe’s Bravo reality show is the lead-in to his!

5. Jennifer Eymere vs. Lynn Tesoro
One of the most entertaining stories to come out of New York Fashion Week back in September 2012 was the now infamous bitch slap that occurred at Zac Posen‘s runway show. Due to seating restrictions, Jalouse editor Jennifer Eymere and her mother Marie-José Susskind-Jalou were left without seats. They began to exchange words with PR exec Tesoro, which ultimately resorted in her getting slapped. Eymere later copped to saying, “Now you know you don’t f–k with French people” following the slap. Tesoro filed suit a few months later seeking unspecified damages. The lawsuit was finally settled in March. Now you know you don’t f–k with publicists, either!

6. Giorgio Armani vs. Roberto Cavalli
If you ask Armani and Cavalli, there’s only room for one male Italian fashion designer. In September 2013, Cavalli wrote a very aggressive blog post stating that the National Chamber for Italian Fashion clearly favors Armani, as they allowed him to change up the fashion calendar, which put Cavalli’s show at a less-than-favorable time. Standouts in the blog post included him referencing Armani as “the Little King” and stating that “his every choice is perceived as an order.” Armani responded in a press conference, sating: “Cavalli should be quiet because the Little King could start to get angry.”

7. Lady Gaga vs. Cathy Horyn
Gaga and New York Times fashion critic Horyn’s feud began to brew back in 2011 when Horyn expressed distaste over Donatella Versace allowing Gaga to wear the brand’s archival pieces in a music video. “Be choosier, Ms. Versace,” she wrote in a piece for the Times—and she also said that she would be unfollowing Gaga on Twitter.

Gaga later responded to the incident stating that she felt Horyn’s role as a fashion critic was outdated in the Internet age. Then, the feud came to a boiling point when Oscar de la Renta expressed his anger towards Horyn regarding a negative review of his show. Gaga sided with de la Renta, prompting Horyn’s boyfriend, Art Ortenberg, to tell WWD that Gaga needed to grow up. Well, she did in her own way, performing a rap song at the Mugler show with lyrics like “Ortenberg, you can suck my d–k” and “Cathy Horyn, your style ain’t d–k.” Sigh.

8. Tory Burch vs. Christopher Burch
Nothing like a big old billion-dollar divorce to incite a major catfight! After Christopher (a majorly rich venture capitalist) helped launch Tory’s fashion line, the couple soon called it quits. However, Burch still owned tons of equity in Tory’s company. As complicated as that was, the fight was taken to another level when he launched retail store C. Wonder, which she considered a “knockoff brand” that stole her preppy-with-a-twist aesthetic. Meanwhile, Christopher alleged that he was the brains behind the whole Tory Burch operation, and should be rewarded as such.

Luckily, they came to their senses and settled the lawsuit—and Tory ended up becoming a billionaire as a result. We guess some fights do have happy endings after all.