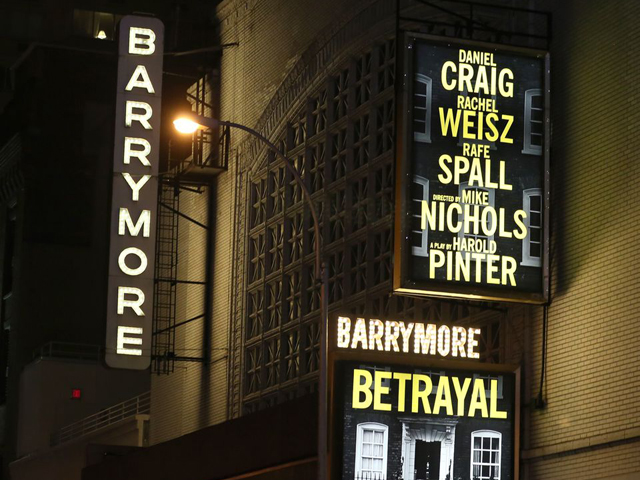 The casting agents knew what they were doing when they chose James Bond’s Daniel Craig and his wife Rachel Weisz (of Oz the Great and Powerful and The Bourne Legacy) to play an on-stage couple in the Broadway revival of Harold Pinter’s “Betrayal.”
Craig and Weisz will be starring as Robert and Emma, a married couple whose relationship is tested by an extramarital affair involving Robert’s best friend, Jerry, played by Rafe Spall.
“Betrayal” first premiered at London’s National Theatre in 1978 starring Blythe Danner, Raul Julia, and Roy Scheider. The 2000 revival starred Juliette Binoche, Live Schreiber, and John Slattery. Following its highly praised 2001 West End production starring Kristen Scott Thomas, discussions began to bring it back to Broadway.
Eventually Scott Rudin signed on as producer and Mike Nichols signed on as director. Here’s what to expect: The drama, set in 1977, is known for its nonlinear structure. The story travels in reverse exploring a hidden love affair filled with betrayal and infidelity that ultimately destroys a marriage and sabotages a friendship.
The show begins previews Oct. 1 and officially opens Oct. 27 for a 14-week run.
For more information or tickets visit betrayalbroadway.com.