As always, the end of Fashion Month brought with it the inevitable forecasting of next year’s trends, and while it’s still too early to tell which styles the masses will take to for Fall 2014, it’s worth highlighting a handful of strong recurring looks that emerged with a vengeance from the runways of New York, London, Milan, and Paris.

MORE: The 50 Best Bags From the Fall Collections

We know it’s a tad early to start planning out exactly what we’ll be wearing and buying come next year when we’re still mulling over which spring pieces to invest in, but it never hurts to get a mental jump on things, right? That said, here are 10 accessible trends from the Fall 2014 runways! 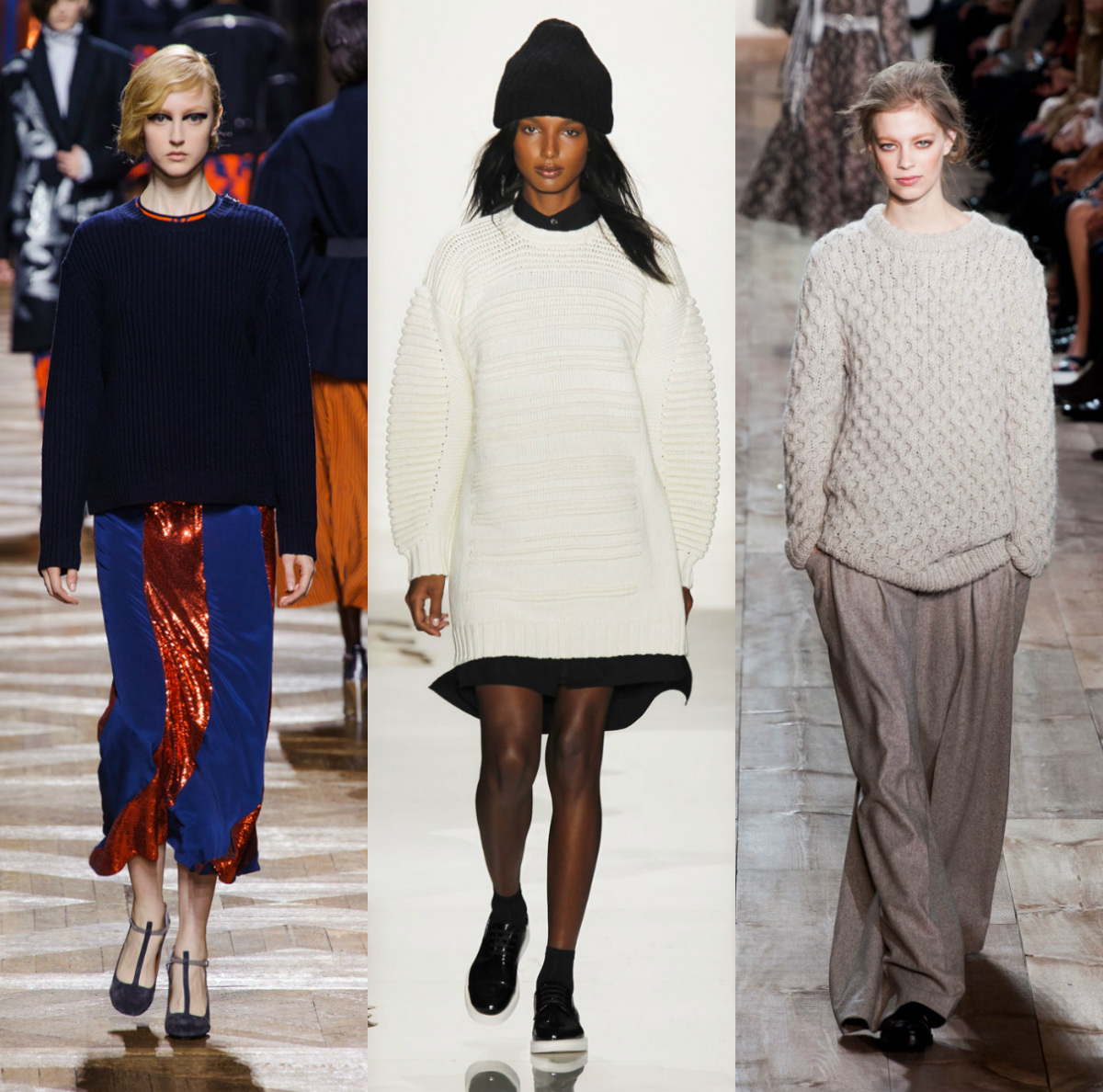 Oversize sweaters
Nothing says autumn quite like a cozy sweater, and on Fall 2014 runways, they were spotted in abundance. Slightly oversized and basic in nature, fall’s knits were often paired with skirts in varied lengths, creating a cool-girl uniform we foresee catching on in spades. 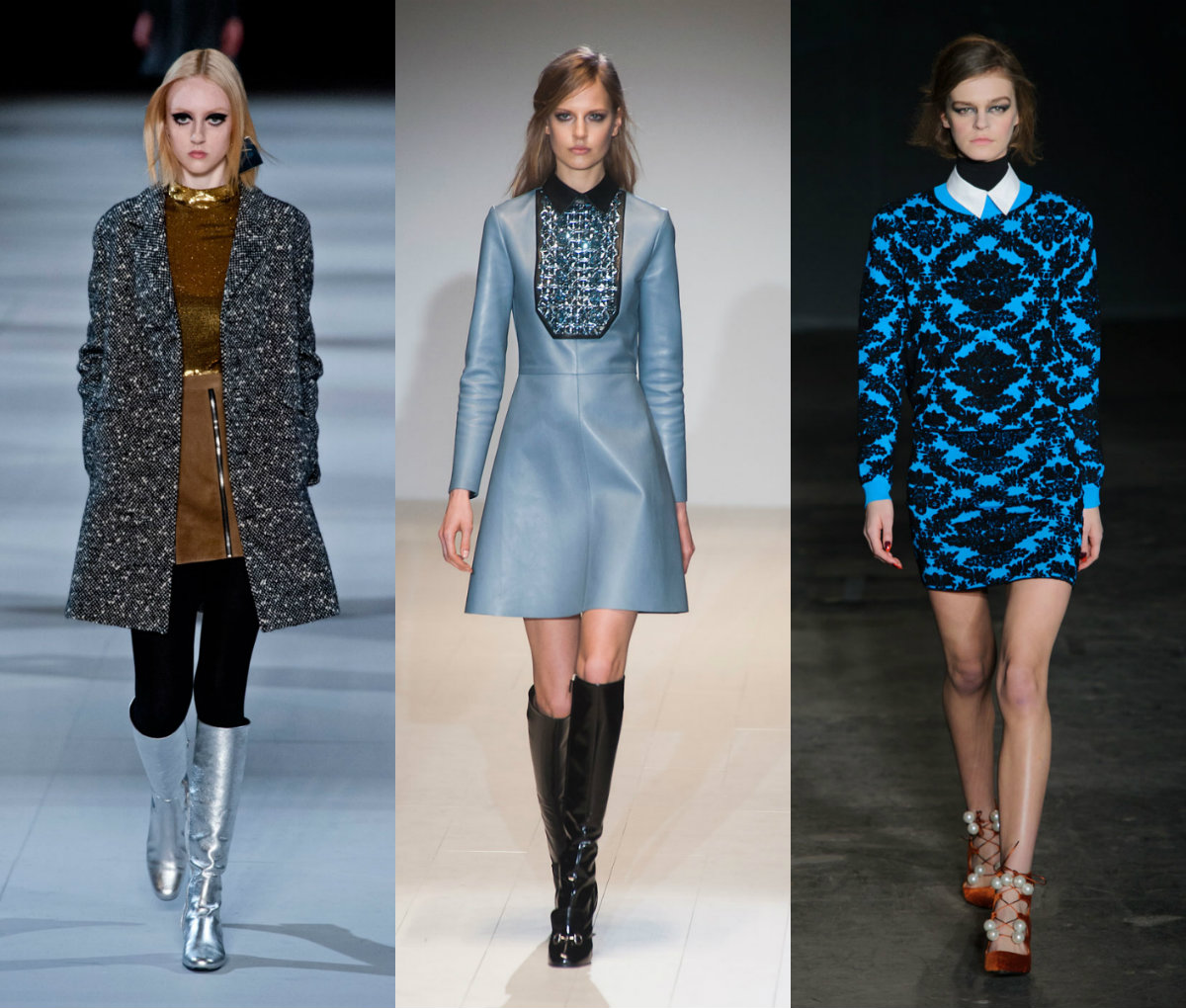 Mod accents
Literal interpretations of the term “mod”—characterized by swinging ’60s mini skirts, high boots, and Twiggy—can often read too costume-y for most modern women, which is why we’re loving Fall 2014’s take on the trend, which uses subtle mod-inspired accents on otherwise contemporary looks, such as metallic boots, subtle A-lines, mini shifts and prim collars. 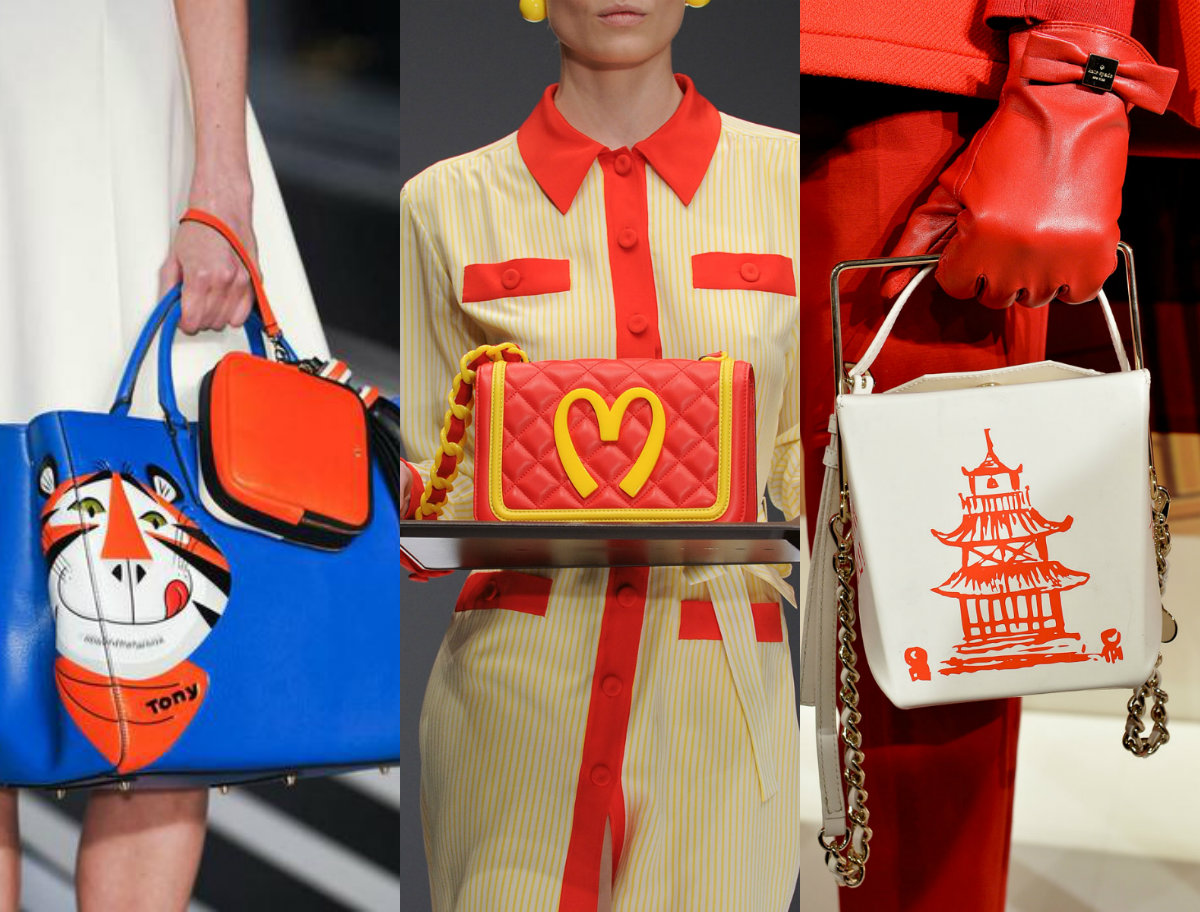 Kitschy, junk food-fixated bags
Well, this is a new one: For fall, several top designers embraced lighthearted bags with a junk food twist. From Frosted Flakes mascot Tony the Tiger at Anya Hindmarch, Chinese takeout containers at Kate Spade, and—of course—the buzzy McDonald’s theme Jeremy Scott employed at Moschino, it seems we’re in for a tasty fall. Not into spending a ton on what we’re betting is a one-season trend? Start planning your DIYs now. 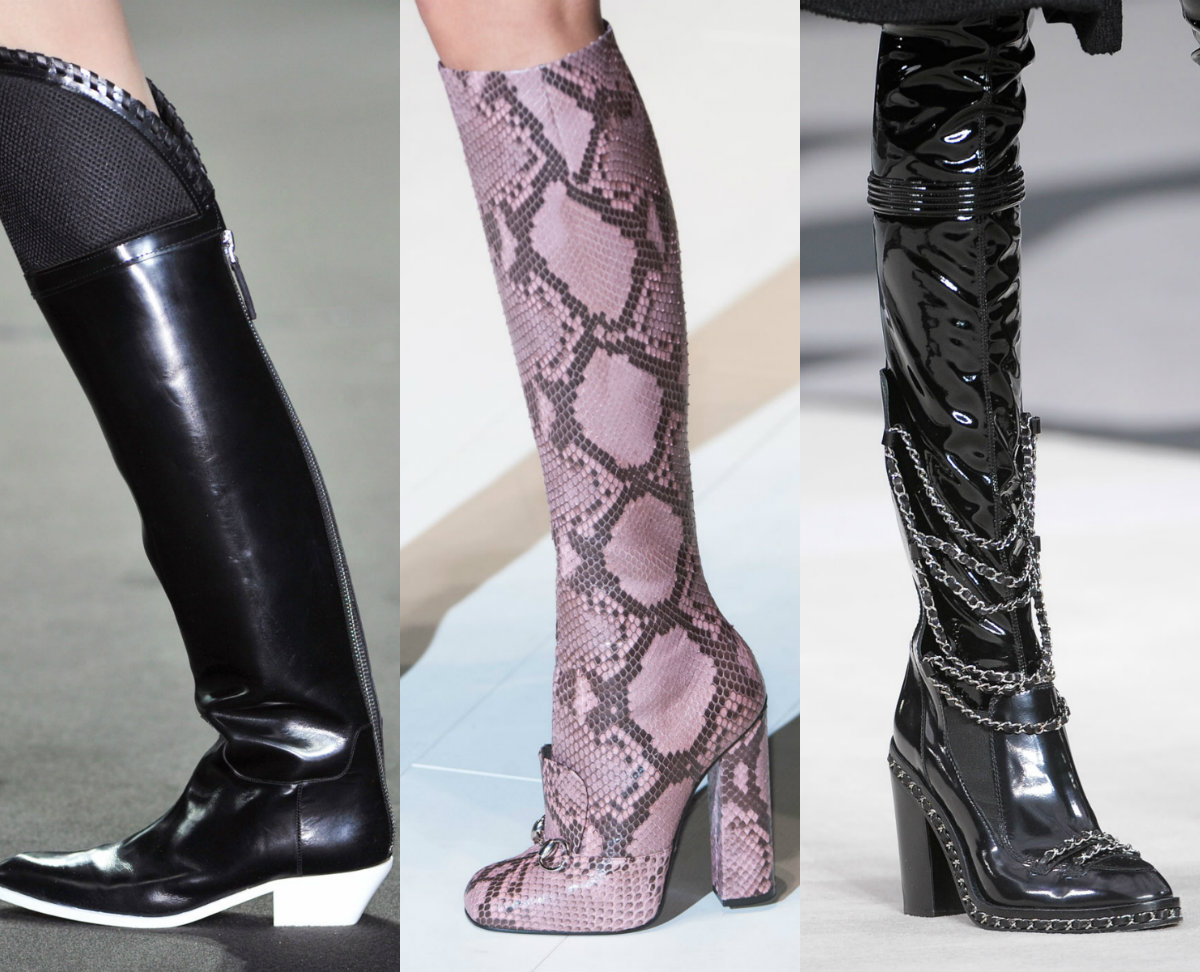 Statement Boots.
Last fall’s tall boots are sticking around, although they’re not meant to blend in. In fact, Fall 2014’s knee-high styles are an outfit’s focal point, with most designers opting for eye-catching colors, interesting textures, and cool details. 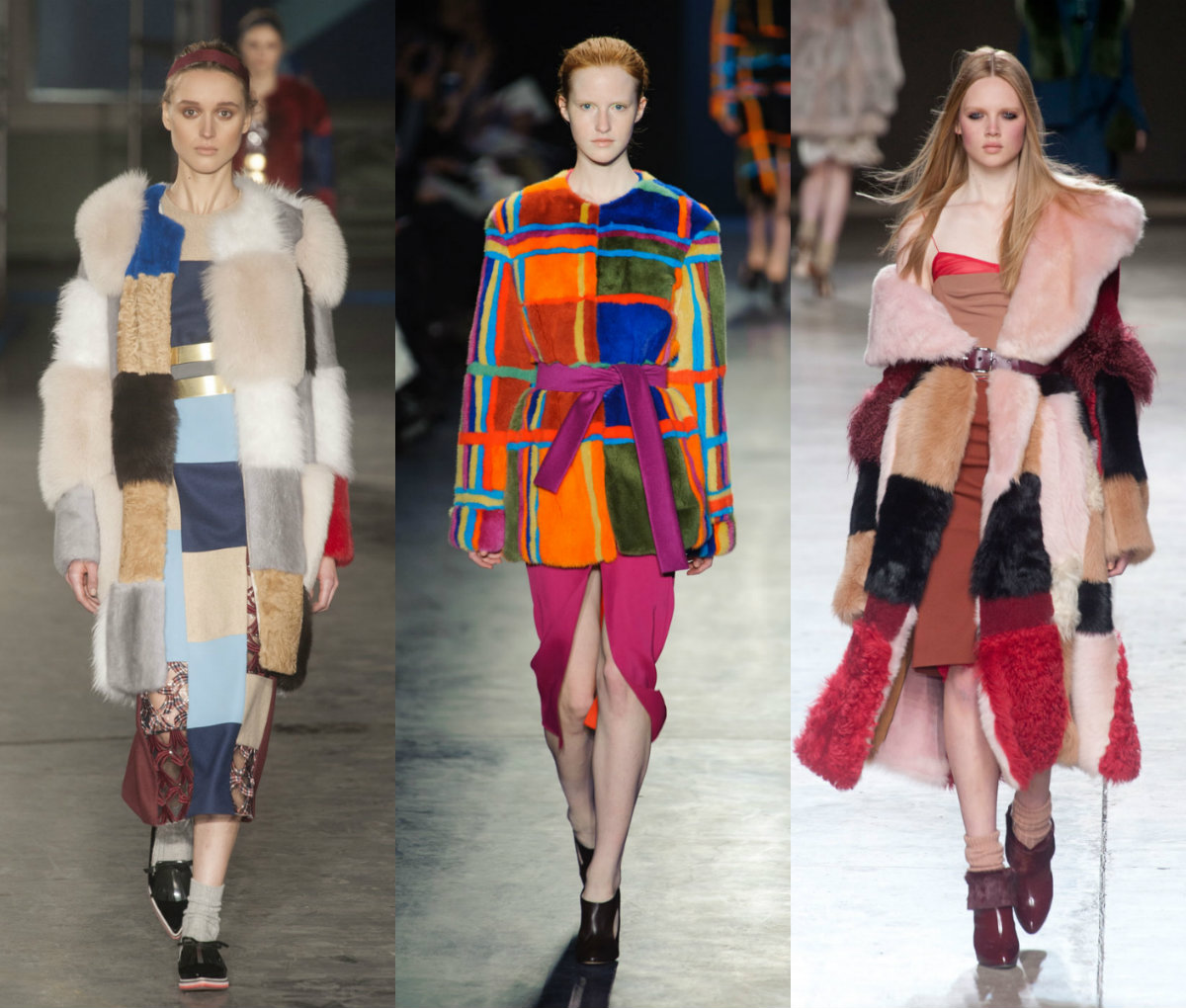 Patchwork Fur
It’s likely a curse to wish next winter is anything like this one, but if it is, we’ll be prepared with the season’s flurry of statement-making, colorful patchwork fur coats. You might think these pieces are hard to pull off, but if you keep the rest of your look simple—think a pair of blue jeans and a solid top—these can add a fun, slightly ’70s vibe. 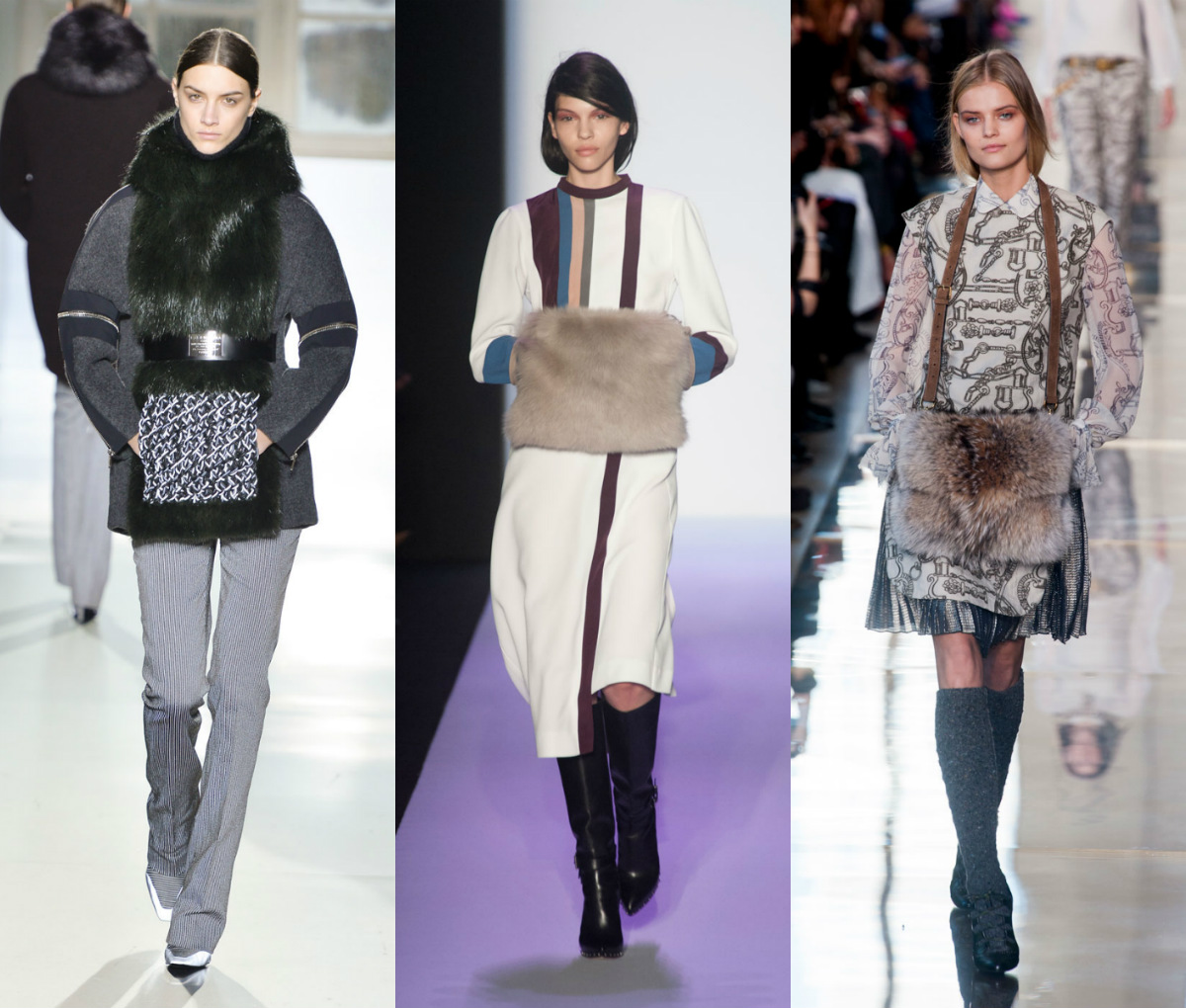 Furry Muffs
This fall, gloves will take a backseat to the charmingly retro muff, the cylindrical hand-warmer that dates back to the 16th century. While Tory Burch smartly attached hers to a strap, and Alexander Wang for Balenciaga attached his to a coat, BCBG took a more traditional approach. Granted, a muff that’s not attached to anything might not the most effective method for women on the go, but it is a lovely accessory for a night out. 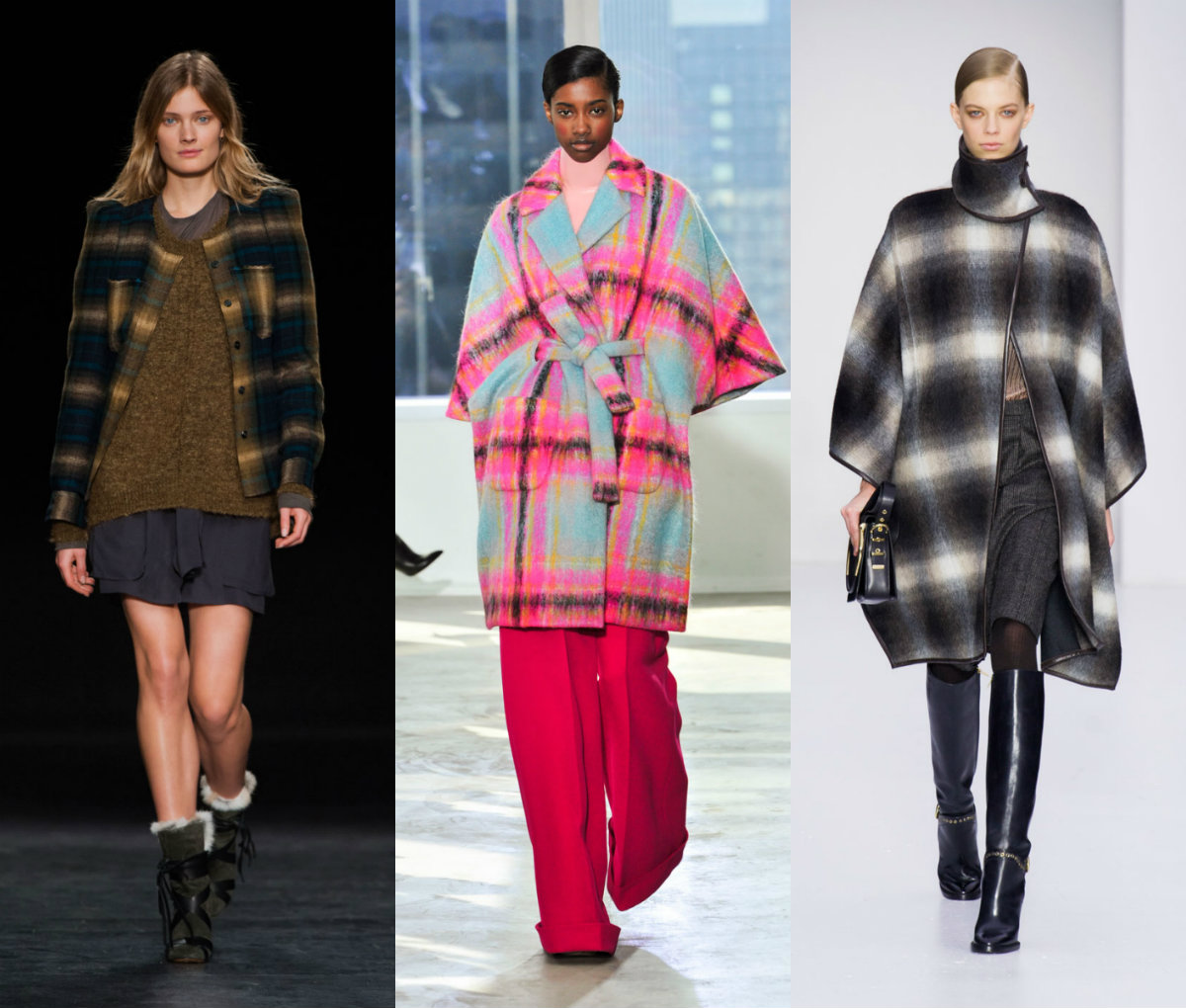 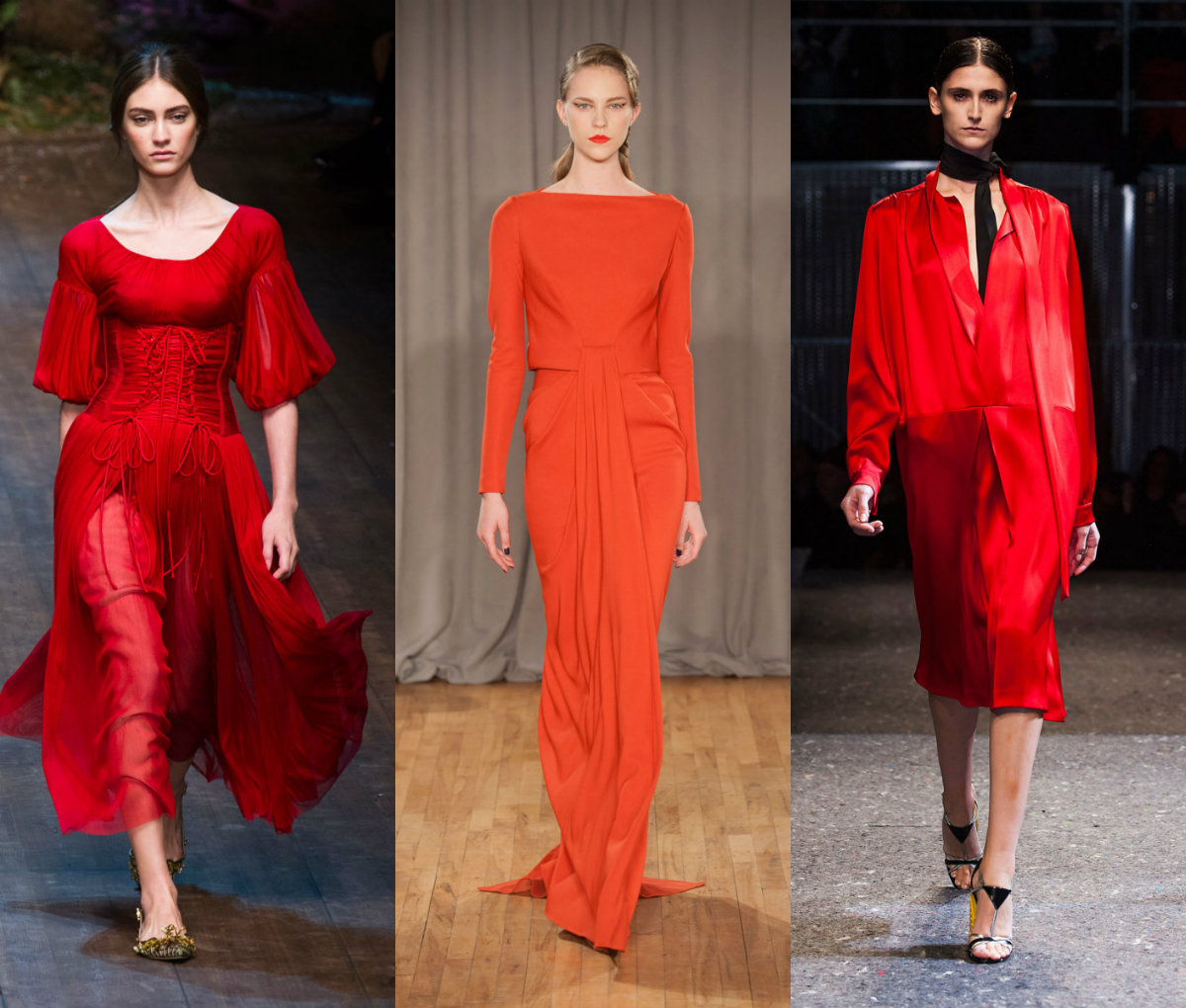 Red, red, red
If there’s one color story that’s really poised to shine this fall, it’s certainly bold red. While we did see some red separates, it looks like Fall 2014’s favorite way to wear the shade is from head to toe, to very glamorous effect. 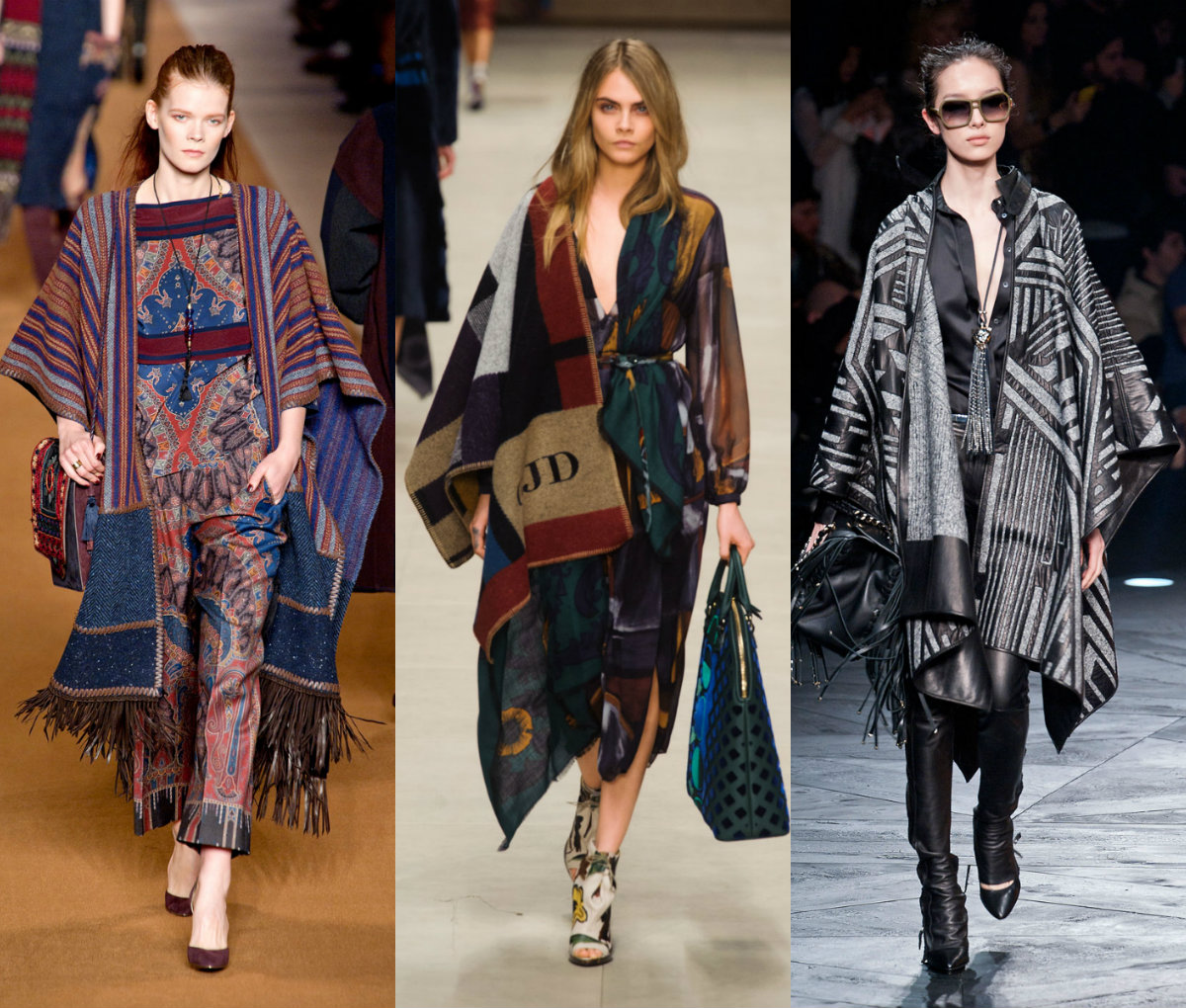 Ponchos and blanket coats
From Burberry‘s monogrammed blanket wrap (surely poised to be one of the season’s “It” items) to slightly more boho styles, a staggering number of designers appropriated the classic poncho into stylized pieces of outerwear. 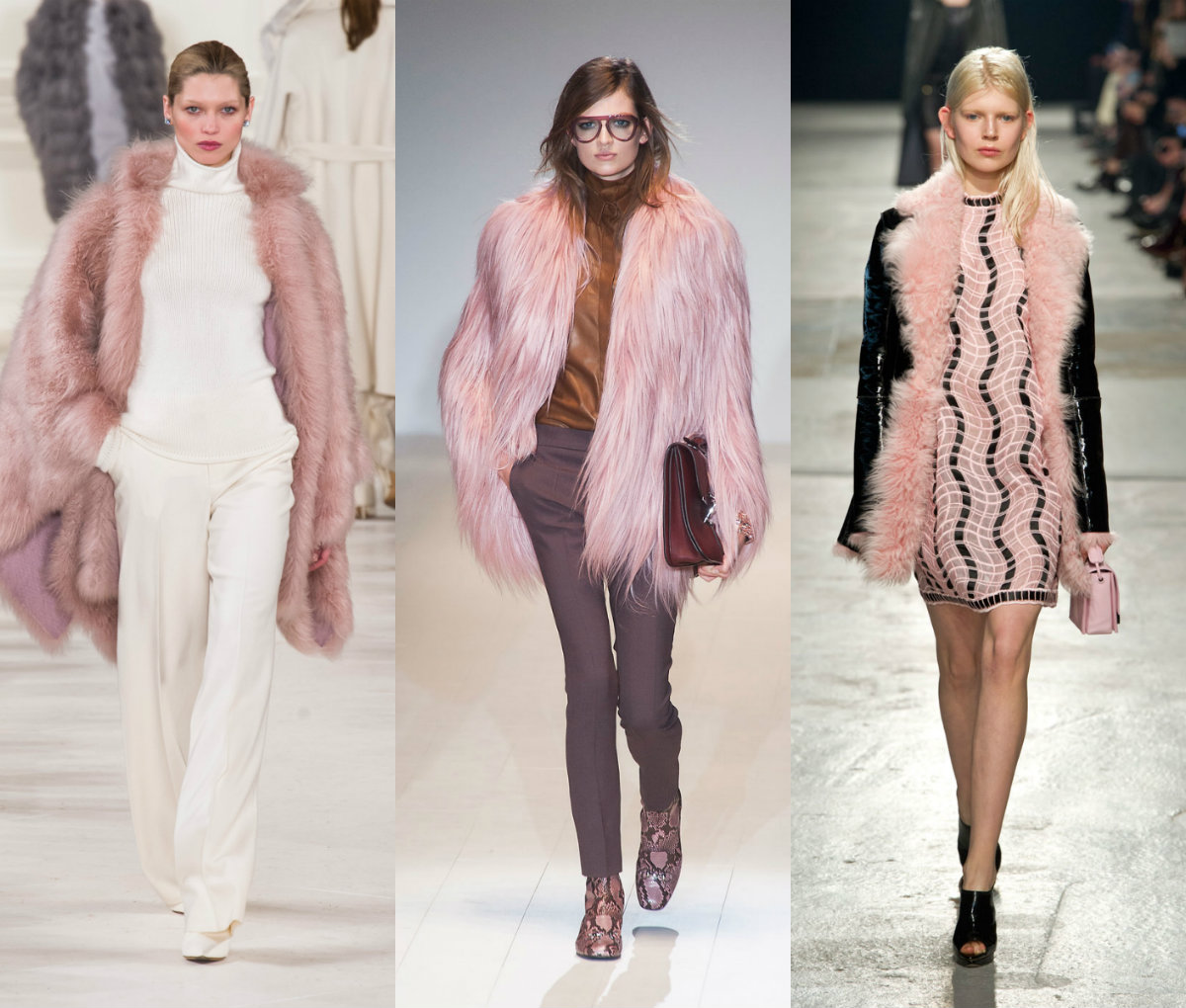 Pastel pink
It looks like last fall’s massive pastel pink trend is sticking around in a big way. For Fall/Winter 2014, we’ll be seeing an excess of pink fur, as opposed to oversized overcoats, but we have a feeling it’ll catch on just as quickly.