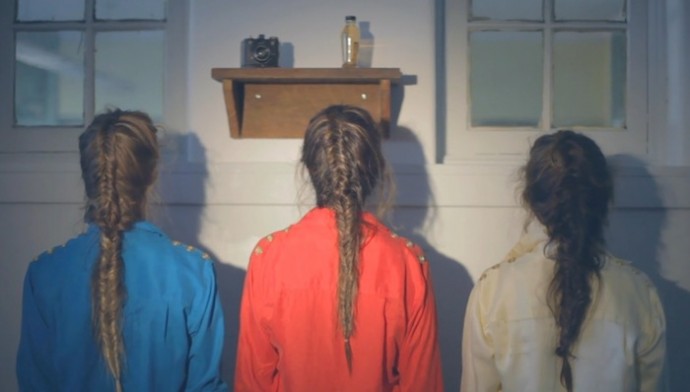 Leave it to New York City based designer Emilie Ghilaga to once again hire a group of fresh faced femmes from the local area for her latest fashion film.

And honestly, it’s quite refreshing to see real girls for once (I get more than my fair share of daily thinspiration working in this biz, thank you very much).

Teaming up with director Robert Kolodny for a second time, this latest short flick showcases the GHILAGA Spring 2012 collection, entitled “The Intergalactic Conference.”

The final-frontier-meets-80s-power-work-wear vibe can be seen through the metallic-finished tailored suit pieces and semi-formal dress attire. And as usually, Emilie’s signature New-York-meets-India look is highlighted through the bold-colored, satin-like finished fabrics.

Keeping the theme of the collection in mind, “…the film is a narrative of the apocalyptic demise of a dystopian society, and the birth of a new and naturalistic world, existing in the urban ruins of the first,” to quote the short film’s press release.

The release continues to state (quite perfectly) that “the story is portrayed using a shuffling stream or rapidly replaced images and movements, almost as if the viewer is witnessing the filmmaker’s stream of consciousness.”

Pretty much you’re going to be in for some NYC youngsters vogue’ing in front of the camera, having a laugh and trying to be artsy–all the while looking downtown chic with just a hint of quirky.

If you don’t believe me, then check it out for yourself down below: