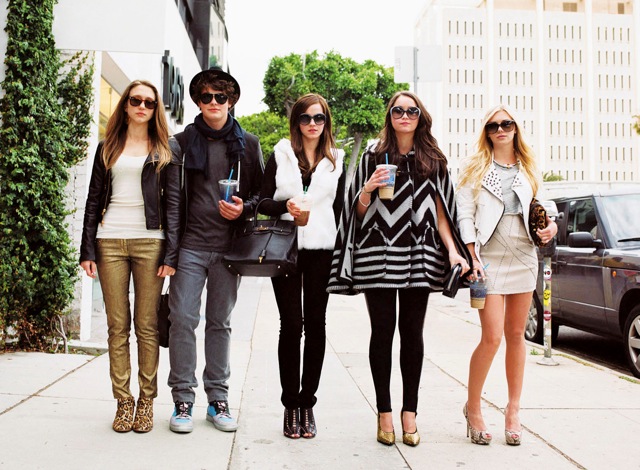 The cast of “The Bling Ring.”

This month’s issue of V magazine features an interview with Stacey Battat, the woman behind the costumes for Sophia Coppola’s buzzy film, “The Bling Ring,” which is based on the infamous group of teenagers who robbed celebrity homes throughout Los Angeles in 2009. Battat—who also designed costumes for the pilot episode of HBO’s hit “Girls” and Coppola’s previous film “Somewhere”—told V that outfitting the cast of the film—which includes Emma Watson, and comes out June 14—was an incredible experience. Below, a few quotes from the interview:

On her inspiration for the costumes:
“I did a lot of market research at Kitson. I learned about the label called Wildfox! And that scene they they go into the store and shop like crazy took place there.”

On the scene at Paris Hilton’s house:
“We weren’t technically allowed to shoot there, because she lives in a gated community. We had to sneak in with a minimal crew, load all the stuff into a normal car, no trucks or anything. It was fun to camp out at Paris’ house. Every nook and cranny is incredible. She had a walk-in shoe closet that was arranged by color.”

To read the full interview and to see more photos, head on over to V, or pick up the new issue on newsstands now!