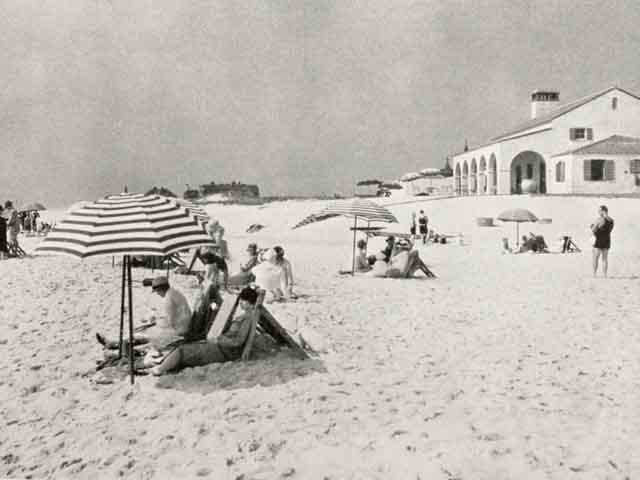 There are the kind of exclusive clubs where spending a few thousand dollars a year will gain you entry. And then there are the kind of exclusive clubs where you gain entry because of your last name: Rockefeller, Astor, and Vanderbilt preferred. Southampton’s Bathing Corporation is one of those clubs. Located across the street from Agawam Lake, the private oceanfront club founded in 1923 on Southampton Village’s Gin Lane is referred to by members as “The Beach Club.” Gaining entry isn’t easy (members often quip that someone has to die before new members are considered) and photos of the club are scant (the above photo of the club was taken in 1928, so the Instagram era has clearly passed this club by).
Member Rolodex: The who’s who of the Social Register. Cristina Greevan Cuomo, Muffie Potter Aston, and Elena Ford have made the cut. Members are marked in the annual The Blue Book, a Hamptons society phonebook of sorts that is sold each year beginning on Memorial Day.
Who’s Been Snubbed: A list of proposed new members went out earlier this year and included society staple Lauren Santo Domingo and her husband Andres. Apparently current members weren’t too happy about the suggestion. One current member told the New York Post: “The Beach Club is the hardest club to get into in the Hamptons. It usually only takes the children of members. Publicity is avoided at all cost. This is a place that sent women home for wearing bikinis in the 1950s. It is not the place for a Vogue shoot.” Other prospective members who have been rejected include the Noel family (of Bernie Madoff notoriety), real-estate mogul Richard LeFrak and his wife, Karen, and oil baron David Koch and his wife, Julia.
How To Gain Entry: The easiest way for a newcomer to gain entry is either through legacy (a child of a member) or through marriage. Interestingly, even marriage isn’t a guarantee that you’ll be admitted to the club, and spouses must go before the club’s committee with a formal request, that aren’t always honored.
Controversy: In the HBO documentary Born Rich Christina Floyd, a member, implied that the club excludes Jews and African Americans. Floyd says in the documentary: “I brought three or four Jewish friends to the Bathing Corporation today for lunch. And it’s fine, I mean, actually I don’t know, that’s the first time I’ve ever broughten (sic) anyone, so who knows? I may get kicked out tomorrow. . . . I think the people at the club would probably not be that excited if someone came in with a black person, especially someone, not that I have any problem with it, please! But especially being that my parents, for example, are relatively new to the club, or to all of this in general, so like we’re already on sort of like ‘watch’ you know, like everyone is already sort of like speculating on what we might do wrong, I feel like.”
More: Hamptons Power List: 50 People You Need to Know This Summer