Intimacy coordinators are changing the film and television industry. We’re taking a close look at how HBO’s Euphoria filmed the sex scenes in its electric first season.  And it’s not as glamorous as you might think. In fact, hookups in film and television are often very technical and not as steamy or easy as they appear on-screen. HBO is taking precautions when it comes to its actors, particularly because it is such a young cast. This is a remarkable change and important step in making sure actors feel comfortable with every aspect of the kiss, make-out sesh or sex-scene that they are simulating.

The explicit new show received a lot of attention before it aired because of the report that there would be 30 penises in one scene in episode two. Though that scene was not nearly as dramatic as the hype around it, the show has depicted quite a few graphic sex scenes that were probably very difficult to approach.

Intimacy coordinator Amanda Blumenthal was brought on board to monitor the sex scene’s for HBO’s hit show. She works as another voice for the actors, mediating between actor and director. If the actor feels uncomfortable or has had enough, Blumenthal relays that to the director. She’s an ally and spokesperson for actors who previous to intimacy coordinators, were often put in uncomfortable situations.

Eric Dane has a scene with full frontal. He opened up to Entertainment Weekly about what it was like having an intimacy director on set with him for filming: “It helps to have one voice in your ear. One voice that you can express your feelings to, and somebody that is an advocate for the actors. It just simplifies a lot of things and makes for a safe and comfortable environment while shooting something that is fairly uncomfortable to shoot.”

Actor Brian “Astro” Bradley dropped out of the project while filming so Algee Smith steepled into the role of Chris McKay. He discussed what it was like filming his nude sex scene with The Handmaid’s Tale‘s Sydney Sweeney. “”…when me and Sydney were doing sex scenes we had an intimacy coordinator on set that HBO brought in to make sure nothing got out of hand,” he told Bossip. “At times that we were feeling uncomfortable the intimacy coordinator would go to the director like ‘Okay they’re not doing any more that’s it.’ We made each other feel very comfortable no matter what the scene was.”

HBO, along with most films and television companies, all have very strict contracts with their actors. It’s called a “rider” and it stipulates exactly what an actor is comfortable with on camera. Euphoria’s show creator Sam Levinson discussed the “funny legalities” that come with shooting the scenes. 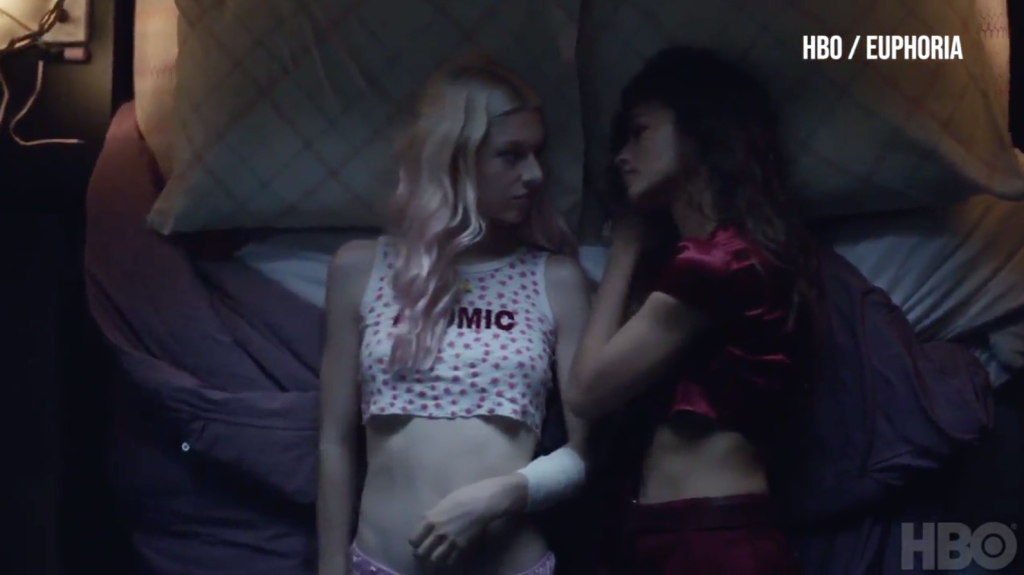 “So if two people are kissing in the front seat of a car and it’s, like, heavy petting or something, Amanda would be like, “Sam, you have to cut.” I’m like, “Why? They’re supposed to hook up.” And she’s like, “Well, the rider says for the back seat, not the front seat.” Just the way HBO legal would do the contracts, it’s very specific as to what you can show and what you can’t show [based on] how it’s written in the script.”