Until very recently–we’ve all known Ambitions star Essence Atkins for her fun-loving, lighter roles. But now, she’s proving that we should have never put her in a box. Though she’s still heralded for her roles in series like the ’90s hit Smart Guy, the quirky early 2000s comedy, Half & Half and more recently on the Fox sitcom, Marlon, opposite Marlon Wayans–Atkins’ latest role shows her in a darker and sexier light.

In the OWN drama Ambitions, the Brooklyn native stars as Amara Hughes. Amara is a federal prosecutor who returns to Atlanta with her husband, Titus (Kendrick Cross) to get her marriage on track. However, what she doesn’t expect is that skeletons buried and shoved in the closet long ago–resurface. Almost as soon as she settles back into the city, Amara finds herself in the crosshairs of attorney and Atlanta’s First Lady Stephanie Carlisle (Robin Givens). Stephanie also happens to be her former college best friend and sorority sister, and the woman Titus was once in love with.

Though she’s determined to focus on fixing things with Titus, Amara can’t help but get entangled in Stephanie’s messy web of games and lies. However, she might have more than a little ammunition up her sleeve to fight fire with fire. Ahead of the midseason finale of Ambitions, STYLECASTER sat down to chat with Atkins about the jaw-dropping new series, and why she’s happy to be shedding her “good girl” persona.

“As an artist, I’m always trying to stretch myself and grow and stoke different aspects of me,” Atkins explained about signing on for Ambitions. “I think it makes me a better creator. So this is definitely different than what people are used to seeing me do. And that intrigued me. And plus, I just love [Amara]. She’s a lot of things to admire, and she’s a lot of things that can be a cautionary tale. And I like that about her. I thought that there was a brokenness in her that I understood, and a complexity that I also understood. A lot of the characters that I’ve played in the past have been very well adjusted. And though Amara is successful, there’s a lot of broken bits to her.”

Though many of Amara’s choices have baffled the audience–Atkins is quite clear about the source of her motivations. “So far I’m very much in the zone, and the pocket of what her motivations are,” she revealed. “And what her intentions are. And how she loses her way. I’m really excited for the audience to continue the journey. There are some really incredible moments upcoming that explain a lot and fill in some of the missing pieces. And I really love that. [Ambitions creator] Jamey Giddens has done such a wonderful job in term of laying out for us as the actors a great foundation and backstory so that we understand what happened before. Even in the most “despicable” characters, there’s a story that we tell ourself to justify our actions. No one is walking around the planet going, ‘Yeah, I don’t know why I’m doing this.’ Everyone is convinced that they’re doing it for some just reason. Even if it’s preposterous. Even if it’s selfish. Even if it’s despicable, we’re telling ourselves a story that we believe that our actions are warranted and just in some way.”

Some of the best scenes to watch on the series are the spats between Atkins’ Amara and Robin Givens’ Stephanie–and apparently, they’re just as exciting to act out. “We’re constantly trying to outmaneuver,” Atkins laughed. “Then when they say cut, Robin and I are like two little girls. We just get so giddy and excited about how we get to play and create. We’ve both been at this for a long time, and we have such a respect for one another because of it. It takes a lot of guts and a lot of intelligence and a lot of fortitude and a lot of tenacity and a lot of strength. I think Amara and Stephanie are the same. They see each other as very formidable. They don’t dismiss each other as being light. I can’t take this, or her, for granted or dismiss it as something that doesn’t have any substance to it. So, that really helps in terms of how we move in these characters. But we have a great deal of fun together, she and I. We are so appreciative of the life that we have and the way that our lives have intersected at this point, at this juncture, and under these circumstances. It’s such a blessing. And we both realize that.” 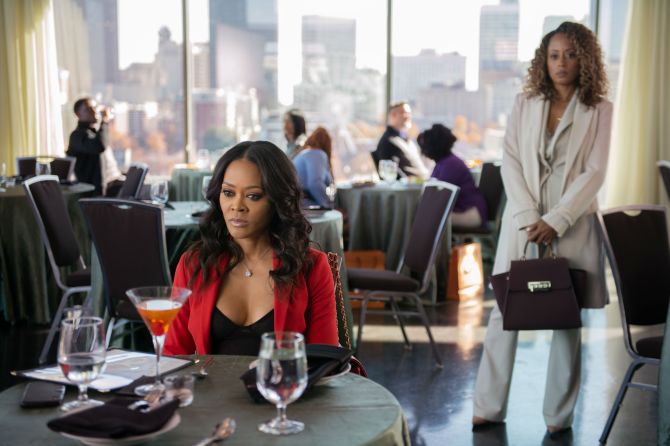 Though the purpose of their move from Texas to Atlanta was to repair their marriage–things have essentially imploded between Amara and her husband, Titus. “Yes, shit has definitely hit the fan,” Atkins reflected. “I’m a bit of a sentimentalist. And I believe that love can resuscitate anything as long as there’s breath. I really believe in that. So I’m going to divulge that as far as Amara’s concerned, as far Essence is concerned, love can resuscitate anything. Love can heal anything. So if there’s love there, it’s always a possibility.”

In Ambitions’ midseason finale, “A Change Is Gonna Come” don’t expect everything to sort itself out for Amara, personally or professionally. In fact, viewers should buckle up for the rest of the season. “There more twists and turns at an even greater pace,” the Smart Guy alum said. “There’s a lot hanging in the air. There’s a lot of question marks. Obviously Amara and Titus, what happens now? What becomes [Amara’s] focus? What becomes the thing that wakes her up in the morning? What becomes the thing that gets her out of bed? Is it exacting her revenge? So there’s a lot of things that wrench up.”

Ambitions airs Tuesdays at 10/9c on OWN.