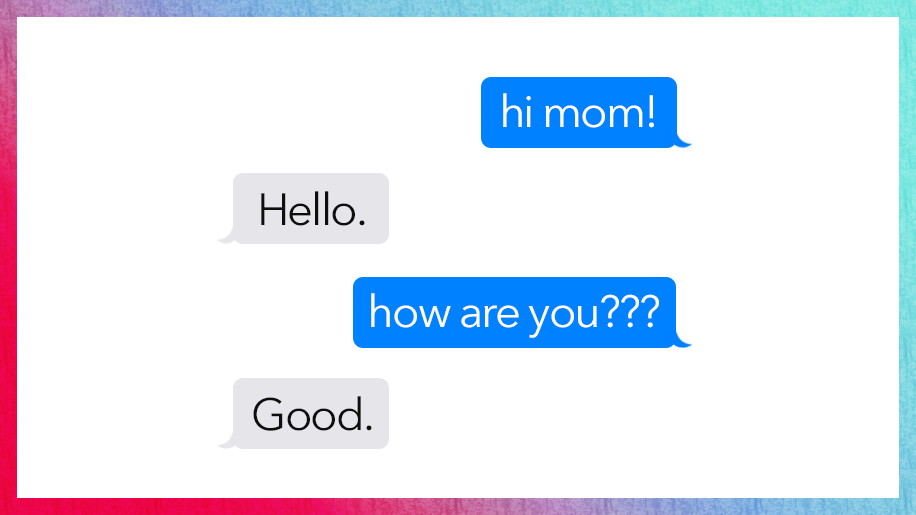 There’s a certain, shall we say, unwritten code for texting that most people seemed to have learned through osmosis. For instance, everyone knows that it’s just plain rude to text your way through dinner with friends, picking an emoji is akin to picking a college or a life partner, and even if you walk and text, you probably know to feel somewhat bad about it.

The biggest faux-pas, however, comes with ending Every. Single. Text. With a period.

Yes, it’s technically good grammar, but it’s sure as hell unfriendly, curt, and paranoia-sparking. And now, there’s a study to validate all your feelings about the evil little punctuation mark.

Researchers out of Binghamton University’s Harpur College found that finishing a text with a period was perceived as harsh and less sincere, Phys.org first reported. In other words, the period is the texting equivalent to a resting bitch face. But why is this one little piece of punctuation so inflammatory in the first place?

It’s all about the perceived meaning of the text (or what you think your friend is saying when they tell you “Sure.” to meeting up later). Without being able to pick up on tone of voice, facial expressions, or eye contact, the tiniest of things (like a period) can make you sound like a monster.

The study, which was published in Computers in Human Behavior, also found why emojis are so popular—it looks a lot more friendly to send a thumbs up or a smiley face than it is to just say “Cool.”

OK, now that we all agree that periods are the devil, go ahead and send this link to your mom, like, now.