Rest in peace. The Emmys 2020 in-memoriam segment included tributes to Supreme Court Justice Ruth Bader Ginsburg, actors Chadwick Boseman, Naya Rivera and more stars who died in the past year. H.E.R. sang a cover of “Nothing Compares 2 U” for the 72nd annual Emmys in-memoriam, which was held on Sunday, September 20, at the Staples Center in Los Angeles.

The in-memoriam segment also included tributes to TV host Regis Philbin, Game of Thrones alum Diana Rigg and Sesame Street puppeteer Caroll Spinney. In an interview with E! before her Emmys performance, H.E.R. opened up about what she planned for her performance. “I’m definitely gonna be bringing out some instruments and I think it’s going to be very emotional,” she said. “And that’s all I’m gonna say. I want it to be special, I want it to be a surprise, but I think you’re gonna love it.”

Ginsburg, who was appointed as a Supreme Court Justice by President Bill Clinton in 1993, died due to complications related to metastatic pancreatic cancer on Friday, September 18. She was 87. “Our Nation has lost a jurist of historic stature. We at the Supreme Court have lost a cherished colleague. Today we mourn, but with confidence that future generations will remember Ruth Bader Ginsburg as we knew her—a tireless and resolute champion of justice,” Justice Roberts said in a statement following her death. 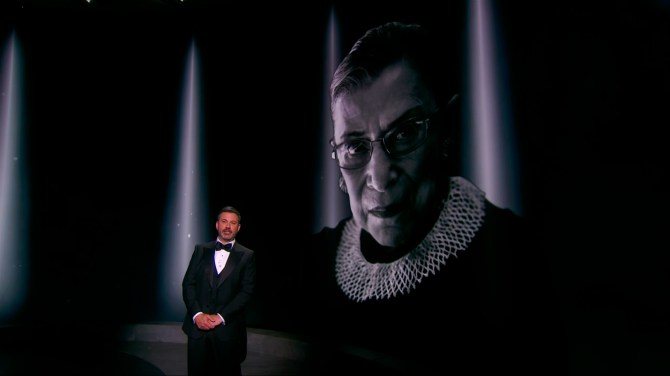 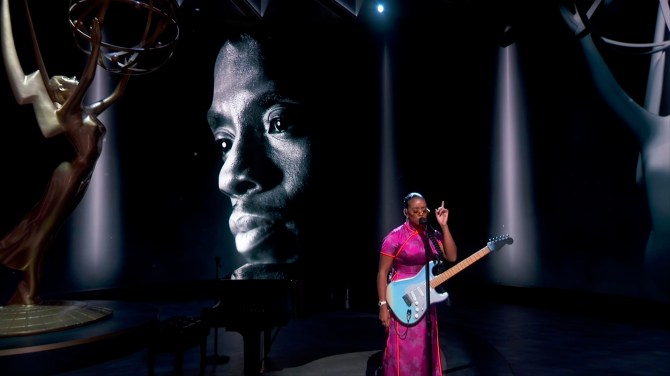 The Emmys’ in-memoriam segment also included a video of a speech by Boseman, who died in August of colon cancer. He was 43. “Purpose crosses disciplines. Purpose is an essential element of you. It’s the reason you’re on the planet at this particular time in history. The struggles along the way are only meant to shape you for your purpose,” Boseman said in the speech.

Boseman’s family confirmed his death in a statement on his social media at the time. “It is with immeasurable grief that we confirm the passing of Chadwick Boseman,” the statement read. “Chadwick was diagnosed with stage III colon cancer in 2016, and battled with it these last 4 years as it progressed to stage IV. ⁣A true fighter, Chadwick persevered through it all, and brought you many of the films you have come to love so much. From Marshall to Da 5 Bloods, August Wilson’s Ma Rainey’s Black Bottom and several more, all were filmed during and between countless surgeries and chemotherapy. It was the honor of his career to bring King T’Challa to life in Black Panther. ⁣He died in his home, with his wife and family by his side.⁣ The family thanks you for your love and prayers, and asks that you continue to respect their privacy during this difficult time.”