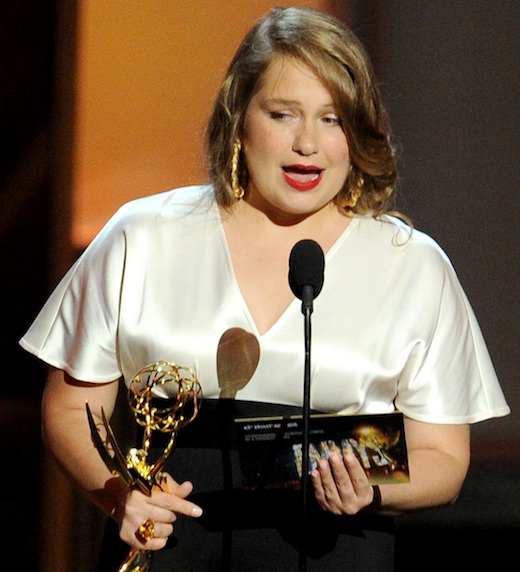 Merritt Weaver was, uh, succinct in her acceptance speech.

Awards shows alway have a few surprises, but perhaps this year’s big one was simply how sad and—dare we stay it—strange last night’s Emmy Awards were. Seriously, between the personalized tributes to actors who have passed, Carrie Underwood‘s rushed, odd rendition of the Beatles’ “Yesterday,” and the poor use of sharp-as-a-tack showman and host Neil Patrick Harris, the show definitely had a bizarre vibe going for it.

That said, there were a few bright spots, mostly found within the winners’ speeches. Below, we compiled the three water-cooler-ready moments everyone was buzzing about this morning. Which one surprised you the most?

1. Bobby Cannavale calls Rose Byrne “love of his life.”
When “Boardwalk Empire” star Cannavale took home the statue, he thanked his girlfriend, “Damages” and “Bridesmaids” star Rose Byrne, calling her “the love of my life.” A pretty bold statement considering they’d only been dating a year or so, and publicly came out as a couple this June at the CFDA Awards.

An interesting sidenote: At the 2011 Tony Awards, Cannavale’s ex-girlfriend, Sutton Foster, had an equally bold declaration, calling him “my love” and said he “changed her life” in her acceptance speech.

2. Michael Douglas thanks Catherine, makes mention of son’s incarceration
When veteran actor Douglas won for his portayal of Liberace in HBO’s “Behind the Candelabra,” he naturally cracked a couple of jokes about his on-screen lover Matt Damon (predictable) but he also thanked recently-estranged wife Catherine Zeta-Jones, prompting a flurry of “get it together, you too!” tweets. Douglas also used the opportunity to thank his eldest son Cameron, who’s currently in prison for drugs. “I hope they let me see you soon.” he said. Hey, at least he was keeping with the night’s depressing theme.

3. Merritt Weaver = Best speech ever.
Newbie Merrit Weaver looked so shocked when she won Best Supporting Actress for “Nurse Jackie” that we thought a long, weepy diatribe was on the way. Instead, after a few “thank you so much” comments, she got to the podium, pulled herself together, delivered the best speech of the night (or, ever): “I gotta go, bye.”