The Favourite is nominated for ten Academy Awards tonight, including nods for its three female actors: Olivia Coleman, Rachel Weiss and Emma Stone. The last looks flawless in her glittery maroon gown, and we have all the details on Emma Stone’s Oscars 2019 date, Dave McCary.

McCary and Stone have been dating for a few years now and have flown seemingly under the radar. The couple definitely enjoys their privacy, and we can understand why. It’s never easy for celebrity couples in the spotlight, and honestly, we find it pretty refreshing that they like to keep things relatively chill. McCary made his directorial debut with Brigsby Bear back in 2017 and Stone is nominated tonight for Best Supporting Actress for her role in The Favourite.

The couple originally met back in December 2016 on the set of Saturday Night Live. McCary actually directed Stone in this sketch for the comedy show, “Wells for Boys.” Stone was then spotted leaving McCary’s premiere for Brigsby Bear in June 2017, and that’s when people were convinced the two were a couple. They finally hit the red carpet together at the SAG Awards earlier this year on January 27th.

They certainly look as cute as ever at the Oscars tonight! Though Stone didn’t walk the red carpet with McCary, the pair could be spotted enjoying some excitement from their seats in The Dolby Theater.

Stone looked stunning tonight in a dazzling Burgundy Louis Vuitton gown. The dress is detailed with sharp shoulder accents and has sequins, pearls and beads embroidered into the fabric. A recipe for success! Stone’s makeup is as chic as ever, and we’re positive her hair color couldn’t be a more perfect fit with her whole look tonight. 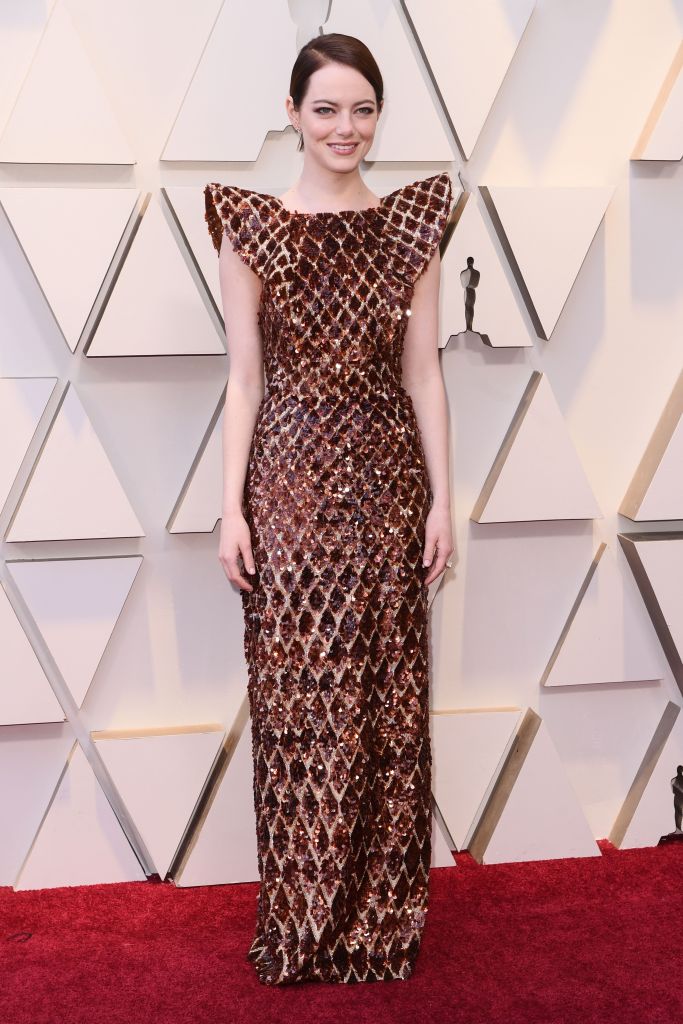 Here’s the adorable couple with the even more adorable Olivia Colman: 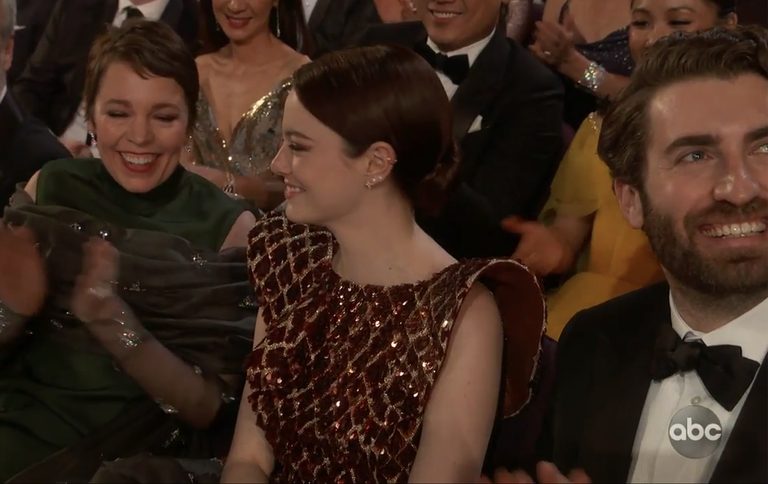 McCary seemed pretty excited for his Oscar-nominated girlfriend (who won Best Actress in 2017 for La La Land). Even though she didn’t take home the award tonight for The Favourite, she’s definitely his favorite! OK— we’ll stop with the puns on the movie title.

Here they are arriving at tonight’s event:

One Twitter fan compared Stone’s dress to a Nutty Bar, and we just had to share. Good one.