Will the real Slim Shady please stand up? And while he’s at it, let’s also take a look at Eminem’s net worth today.

Eminem—whose real name is Marshall Mathers—was born on October 17, 1972, in the city of St. Joseph, Missouri. His father Bruce abandoned him as a child, relocating to California to start a new life with another family and leaving Eminem to be raised by a single mother. Em and his mom Debbie moved around a lot when he was growing up, mostly bouncing between Detroit and Missouri and seldom staying in one place for more than a year or two at a time. In Missouri, they resided in a variety of locations including St. Joseph, Savannah and Kansas City. But it was Eminem’s upbringing in Detroit that proved to be the most impactful on his life and career.

Back in the Motor City, Eminem had a particularly difficult time fitting in. He was often bullied and beaten up at school, an experience he would later recount on tracks like 1999’s “Brain Damage.” At the age of 17, Eminem dropped out of high school when failing to complete the ninth grade after repeating it three years in a row. While Eminem showed an interest in English—he loved comic books—he disliked math and social studies, leading to bad marks all around. As a teen, Eminem also took up a number of jobs to help his mother pay bills. He later revealed that she frequently kicked him out of the house despite his efforts, typically after collecting the majority of his paychecks.

Eminem began rapping with his high-school buddy Mike Ruby when he was 14 years old. They went by the monikers “Manix” and “M&M,” the latter of which stood for his initials and eventually became “Eminem.” The pair often participated in open mic contests at the Hip-Hop Shop on West 7 Mile, which is regarded as a kind of “ground zero” for Detroit rap culture, leading Eminem to quickly make a name for himself in the underground hip-hop scene. As his popularity grew, Eminem was approached by a number of rap groups who wanted to work with him, including New Jacks, Soul Intent and D12. 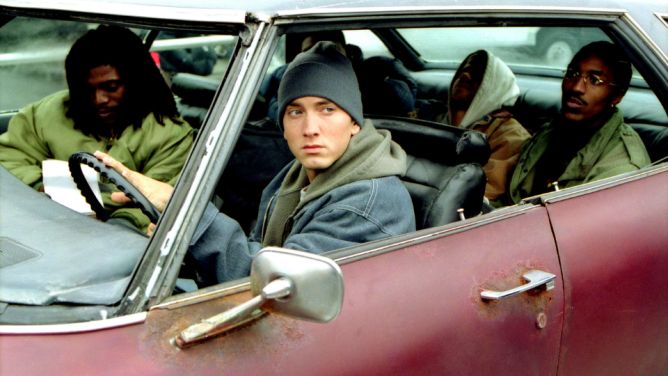 After a brief series of collaborations, the rapper released his debut solo album, Infinite, in 1996. The record was a flop, as Eminem’s style at the time lacked the comically violent edge for which he later became famous. Things started to look up for Eminem the following year when he began experimenting with his alter-ego, Slim Shady. He was soon discovered by Dr. Dre, the creator of Aftermath Entertainment. With the N.W.A. founder’s support, Eminem released The Slim Shady LP in 1999, which went on to become certified triple platinum by the end of the year.

Since then, Eminem has released multiple studio albums, one compilation album, and one EP, including 2000’s The Marshall Mathers, 2002’s The Eminem Show, 2004’s Encore, 2009’s Relapse: Refill, 2010’s Recovery, 2017’s Revival, 2018’s Kamikaze and 2020’s Music To Be Murdered By. His records have sold more than 220 million copies globally, with over 40 million recordings sold in the United States alone. Eminem has also worked with a wide variety of musicians—including the likes of Drake, Rihanna, Dr. Dre and Ed Sheeran—and has even appeared in a film based on his life story. As if this long list of accolades wasn’t enough, the hip-hop great decided to join his fellow legends on stage for the Super Bowl Halftime Show in 2022. Another goal ticked off the list!

With such an illustrious career, you already know that Eminem’s net worth is impressive. But how much does he make, exactly? Keep on reading below to find out where Eminem’s net worth stands as of 2022—along with how much he made from events like the Super Bowl and more.

What is Eminem’s salary?

Eminem is frequently ranked as one of the highest-paid performers in the world, according to Forbes. In a typical year, the rapper earns around $20 million alone. According to Celebrity Net Worth, that figure may easily exceed $30-50 million during the years in which he is actively touring in support of a new album.

How much did Eminem make from the Super Bowl Halftime Show? 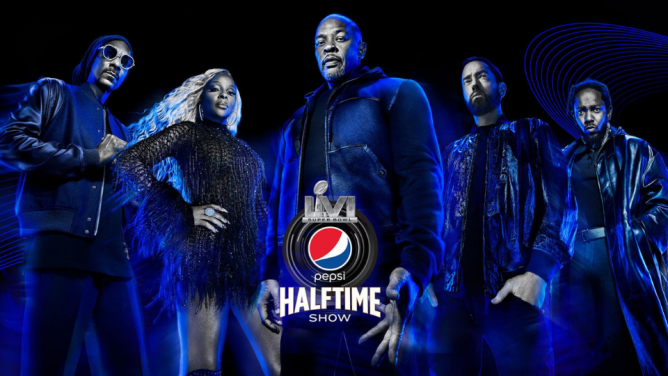 For someone as successful as Eminem, you’d probably expect the rapper to earn a hefty paycheck from performing at an event as popular as the Super Bowl Halftime Show. But as it turns out, the National Football League doesn’t actually compensate musicians for their appearances during the halftime show. In 2016, a representative from the NFL told Forbes, “We do not pay the artists. We cover expenses and production costs.” Instead, the event is considered free publicity for musicians, with the expectation that they will experience increased sales and streams as a result of their performance. So, it looks like Eminem’s Super Bowl Halftime Show salary was a whopping zilch in 2022.

Nevertheless, the rapper was thrilled to be included in the event—even if he had some nerves going into it. “When Dre first asked, when the whole thing started going down and we were like, ‘OK, this might be actually serious.’ I was trying to envision what Dre might do,” he said in a SiriusXM interview in February 2022. “I was thinking like, ‘Yeah, it’s dope that all of us are gonna rap together.’ [But] I didn’t expect it to be, like the production to be like this.”

“I’m gonna tell you, it’s f–ing nerve-racking. To me, there’s nothing more final than live TV. You know what I’m saying? So if you f–k up, your f–k up is there forever,” he added. Still, Eminem was “blown away” by his fellow rappers at the show: “Kendrick is at the very top, top tier of lyricists,” he said at the time, referring to rapper Kendrick Lamar. “Not just of this generation, but of all time.”

So, what is Eminem’s net worth? According to Celebrity Net Worth, Eminem’s net worth is $230 million as of 2022. The rapper’s net worth is thanks in large part to his wildly successful record sales along with his millions of earnings accrued through touring revenue throughout the years, which have consistently placed him on Forbes’ list of wealthiest rappers and celebrities in the world. 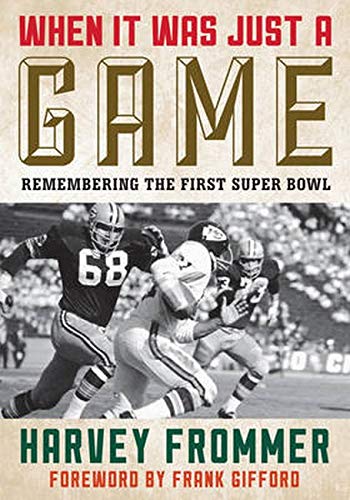 For more about the Super Bowl, football fans can check out When It Was Just a Game: Remembering the First Super Bowl by Harvey Frommer. The best-selling book delves into the history of the first Super Bowl, which was originally known as the AFL-NFL Championship Game. (The term “Super Bowl” was coined only in its third year.) The debut game, between the winning Green Bay Packers and the Kansas City Chiefs, was played in front of only 61,946 people at the Los Angeles Memorial Coliseum—an audience well below the stadium’s capacity. Harvey Frommer, a sports historian and reporter, puts the tale of that momentous game together using oral history, gathered by hundreds of interviews with players, coaches, media and spectators alike.