Emily Ratajkowski is no stranger to body-shamers. From being called “too skinny” to being told to “eat a burger,” the 27-year-old model is a constant target of thin-shamers. So when she saw Sarah Hyland being thin-shamed for a bikini selfie on Instagram, she knew she had to come to her defense.

The Modern Family star came under the attack of body-shamers on Friday when she posted an Instagram of her in a mismatched bikini. The picture featured the 27-year-old actor in a swimsuit with big hair and glasses, while showing off the surgical scar on her waist from her kidney transplant in 2012. “#feelinmyselffriday Thought I came up with a cool new hashtag… turns out I’m wrong. ALSO. Turns out I’m not the first person to take a selfie in the bathroom… weird. #showyourscars #gryffindor,” Hyland captioned the picture.

Immediately, Hyland was attacked by body-shamer who criticized her weight and told her to “eat more.” Comments ranged from those who called her “sickly skinny” to those who told Hyland that she had “too much fucking bone.” “EAT SOMETHING U LOOK LIKE U HAVENT ATE IN YEARS,” one person commented, while another told Hyland’s boyfriend, Bachelorette alum Wells Adams, that he was “dating a stick.”

Witnessing the negativity on Hyland’s Instagram, Ratajkowski slipped into Hyland’s comments and told her to “fuck” the haters.” Ratajkowski also complimented how Hyland looked in her swimsuit, which the model noticed was from her own swimwear link, Inamorata Swim. “You look amazing. Fuck em (@ you kill it in @inamaorata swim every time!)” Ratajkowski commented, to which Hyland responded with some kissing-face emojis.

Ratajkowski wasn’t the only one who defended Hyland from body-shamers. Hyland’s boyfriend also took on the haters after one told her to “Eat a doughnut.” Adams responded by telling the commenter to “eat shit.” Likewise, hundreds of Hyland’s fans also came to her defense, shutting down the body-shamers and explaining how criticizing someone’s body, regardless of their weight, is damaging and dangerous. 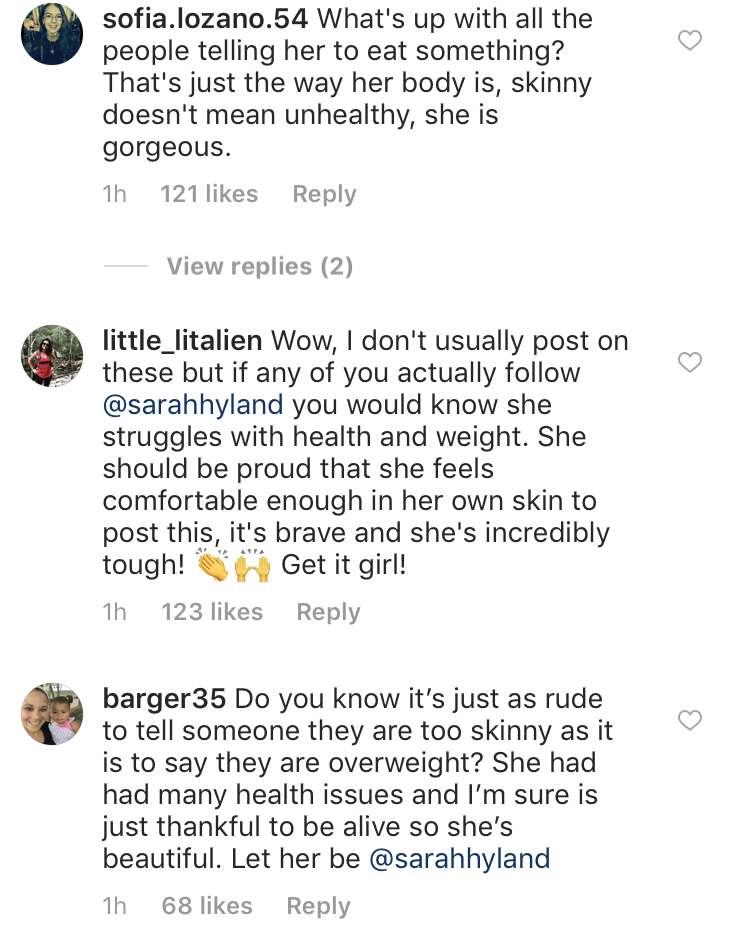 MORE: 8 Female Celebrities Who Were Body-Shamed for Their Muscles

Like some of Hyland’s followers said: Can we please let her be?