Instagram is hating on Emily Ratajkowski for posting a photo of her friend, Caitlin King. Some are saying it was mean because it opened King up to body-shaming. Emily Ratajkowski is responding to the Instagram hate. The model’s latest bikini photo shows her and King with their “beach buns” front and center. The supermodel-turned-swimsuit-designer was showing off some new designs from her line Inamorata. But shortly after she posted the picture, Instagram users began to criticize Ratajkowski for posting the pic which some believe subjected King to body-shamers. Uh…excuse me?

First of all, no one should be body-shaming her friend because literally who cares? She looks like she’s having a great time on the beach and just because her body is different from Ratajkowski’s doesn’t mean it’s wrong. Second of all, even if people are idiots and have choose to body-shame King, that lies on the trolls, not Ratajkowski. Why should Ratajkowski hide her friend because of some mean people on the internet? Social media is full of trolls who will say someone is too skinny or too fat or too pale or wearing too much makeup. Honestly, no one can do anything right these days, so it’s best to ignore it—not to hide in shame or fear.

One user commented, “Why would she subject her friend to this humiliation and online bullying by posting this?” Another added, “You specifically posted a photo so that it was clear your body is better than the body of your friend.”

However, Ratajkowski has come to her own defense as well as King’s. She posted an Instagram story and replied to the commenter to say that she and King both love the way they look in the photo.

“I love my friend’s body and both her and I think she looks great here! And I’m proud she’s rocking my suits,” Ratajkowski said in the comments. “All these haters are crazy. Just because you’re used to seeing one body type on the internet doesn’t mean that that’s the only kind that should be considered ‘beautiful.’”

On her story, she wrote, “I LOVE MY GIRLS BODY AND HER AND I BOTH THINK SHE LOOKS GREAT HERE AND THAT THIS IS A VERY CUTE PIC OF US GETTING SEVERE SUNBURNS.” 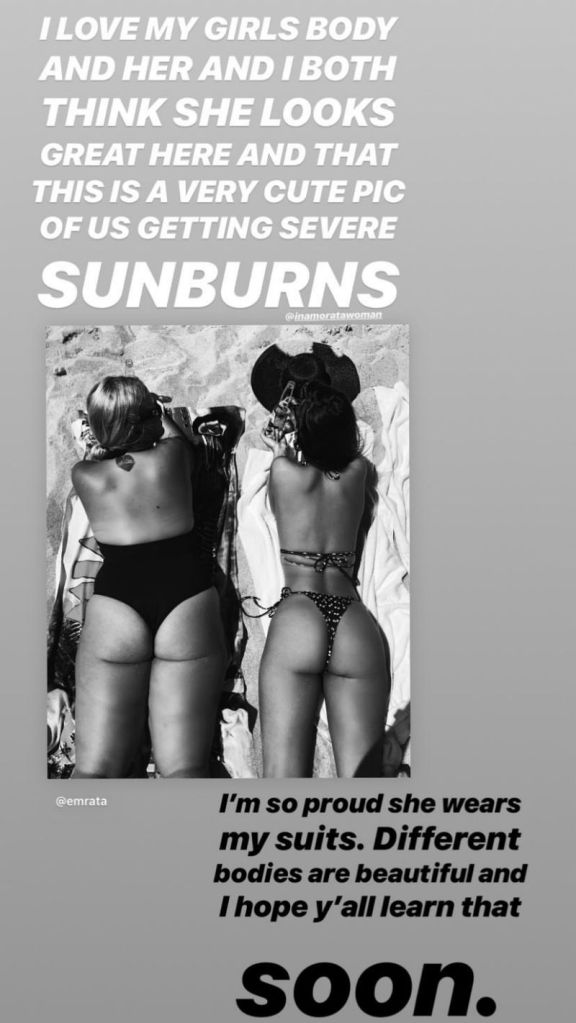 The model then added, “I’m so proud she wears my suits. Different bodies are beautiful and I hope y’all learn that soon.”

King explained to Yahoo Lifestyles, “If I love myself and love [Ratajkowski’s] suits and love myself in the suits that’s all that matters.” That’s what we like to hear!