Confident, poised and definitely in over her head, junior marketing executive Emily Cooper (Lily Collins), a.k.a. Emily In Paris, arrives in Paris ready to embrace the romance and culture the city has to offer, despite not speaking a word of French. Her goal: to bring an “American perspective” to Savior, the French marketing firm her Chicago-based company recently acquired, despite the clear disinterest from her new French co-workers.

Our Netflix story begins in Chicago, where Emily’s boss Madeline (Kate Walsh) finds herself unexpectedly pregnant and unable to make her planned move to Paris. Emily is sent instead, leaving her Cubs-loving boyfriend at home. In a twist we all saw coming, the two break up by the second episode.

Emily is clearly type-A and finds herself out of place with her French co-workers who arrive at the office at 10:30 in the morning, drink wine during their hours-long lunch break and work to live, rather than live to work. And somehow she thinks they’re doing it all wrong? 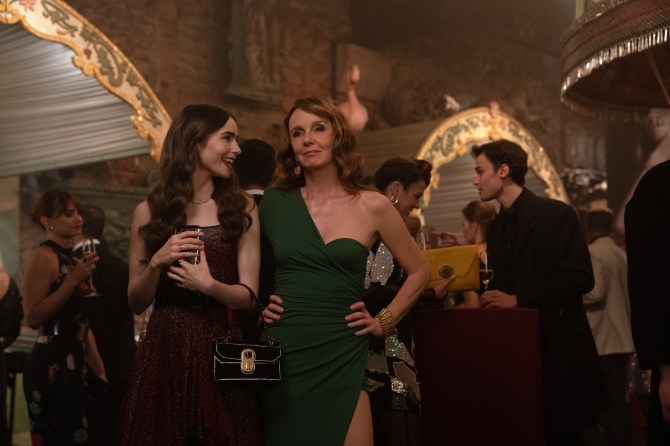 Emily’s arrogance is our entertainment. Every time she brings up the “American perspective” and expects her co-workers to be all ears, I couldn’t help but laugh. Her prudishness and disdain for the French way of talking so openly about sex was a cliché I saw coming but enjoyed nonetheless. Especially the scene where Emily mistakes a pair of nipple rings for earrings. TBH, this basic American bitch would have done the same.

Savoir employees Luc (Bruno Gouery) and Julien (Samuel Arnold) provide some comic relief and toe the line of having Emily’s back while still showing rightful disdain for her need to Americanize their French office. I’m putting a call out to Darren Star right now for more shenanigans with these two next season, please!

We also watch Emily try and try again to (mostly unsuccessfully) win over her boss Sylvie (Philippine Leroy-Beaulieu), who clearly wants nothing to do with Emily’s attempts at a mentor-mentee relationship. Eventually, they find their groove, but it’s fun to watch the turbulence until they get there.

Other highlights of the show include Emily’s first friend in Paris, Mindy (Ashley Park, of Broadway fame). Although she wasn’t utilized as much as I wanted her to be, I’m just grateful creator Darren Star made sure to include a musical scene, just to entertain us with Park’s incredible talent. 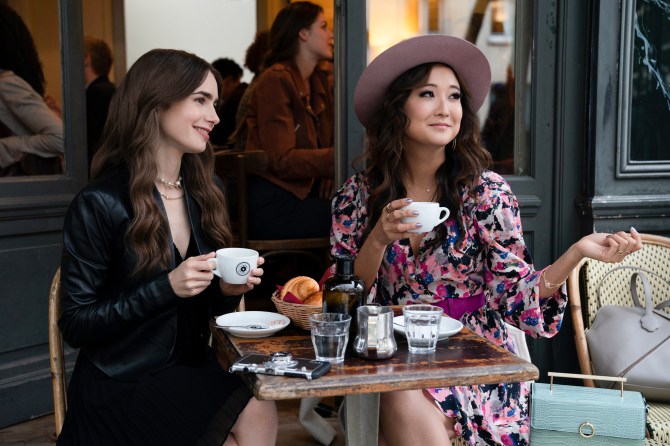 Emily’s romantic entanglements throughout the show were also fun to watch, especially the sexual tension between Emily and her downstairs neighbor, sexy chef Gabriel (Lucas Bravo). Who, as it happens, is dating Camille (Camille Razat), one of Emily’s closest friends in Paris. Complicated! We love to see it.

As the episodes went on, Emily became more likable than I expected her to be. She’s a dork and a try-hard, a few things I can definitely relate to, and I’m sure I’m not alone. Emily isn’t presented as this cool American girl from New York or L.A., she’s a basic bitch from the Midwest and she knows it.

Emily never tries to pretend to be someone she’s not, even if her true self is a bit annoying. I also appreciated the scene when Emily changed a selfie caption from “falling in love with myself” to “#LonelyInParis.” The Netflix series may be surface level, but it’s not completely idealistic.

Emily In Paris is a delightful little show, perfect for fans of Gossip Girl, Younger and fashion fanatics in general—the outfits are truly fantastic. It’s a quick binge or a great show to watch while unwinding after a long workday. Perfectly escapist, a little sprinkle of cheese without being unbearably corny and clothes to die for.