Emily Blunt and John Krasinski have been our favorite “it-couple” of the awards season so far, and the duo didn’t disappoint last night. Krasinski and Blunt were *practically perfect* at the SAG Awards on Sunday, January 27—in every way! Blunt was up for two awards: Best Leading Actress for her performance as the posh, proper nanny in Mary Poppins Returns and Best Supporting Actress for her harrowing role in A Quiet Place, directed and also starring her husband. Blunt won for the latter (her husband’s directorial debut!), which resulted in the CUTEST interaction between the two lovebirds. Emily Blunt and John Krasinski’s SAGS 2019 moment was the sweetest and most adorable thing we saw all night.

Krasinski started the night with a selfie of him and his wife, and his caption was full of pride. “Honored to be on the arm of this double nominee tonight! #SAGawards,” he wrote.

It’s literally the most understated caption, but the minute we saw it, we knew the world was swooning. They are teaching us what it means to be a supportive, loving and goofy couple. Seriously? Krasinski is writing the handbook. Tell us we’re wrong.

The couple arrived in style at the 25th Annual Screen Actors Guild Awards, with Blunt rocking a bold pink look and slicked back hair. 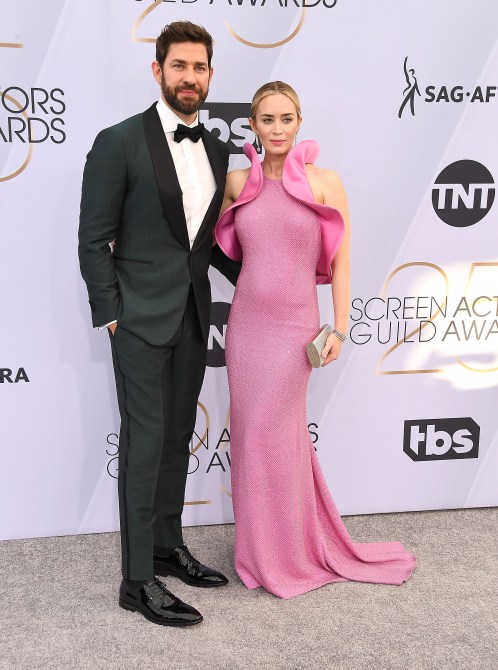 Blunt went with a statement dress for the 2019 SAG Awards that looked like it came from Elle Wood’s dream closet. She was pretty in pink, wearing a custom Michael Kors Collection dress. 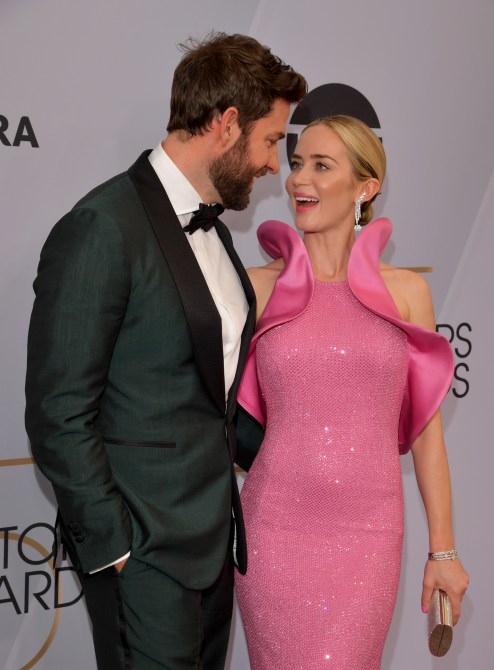 The couple shared a few laughs throughout the night, but their most endearing interaction by far was when Blunt won best supporting actress because in that moment. Krasinski definitely won best reaction of the night! Chris Pine announced the nominees and said, “And the Actor goes to …”—with all five nominees, Amy Adams (Vice), Emily Blunt (A Quiet Place), Margot Robbie (Mary Queen of Scots), Emma Stone (The Favourite) and Rachel Weisz (The Favourite), waiting in anticipation as he fumbled with the envelope—“…Emily Blunt! For A Quiet Place.”

Blunt turned to her husband who couldn’t contain his surprise or joy. Krasinski covered his face and appeared absolutely stunned as Blunt’s win was announced. The couple immediately shared an adrenaline-filled hug, with Krasinski giving his wife a standing ovation as she took the stage to accept her award. 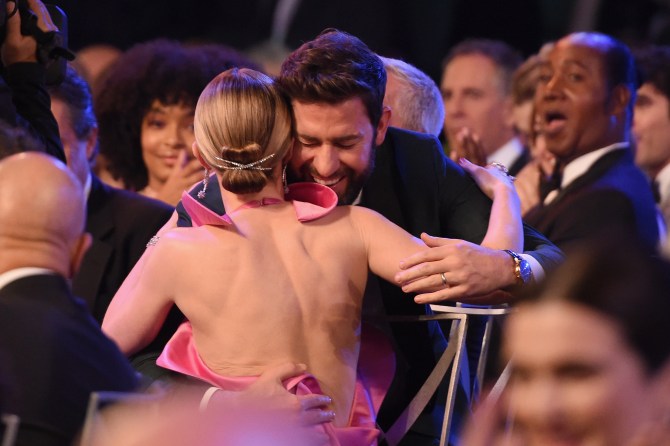 This GIF of Krasinski and Blunt has obviously blown up on the internet and we can see why—it’s a moment of pure love and joy captured between two of the most talented and beautiful people on the planet. Their love and admiration for one another is so evident and inspiring.

And of course, when Blunt took the stage, she spent the majority of her time thanking Krasinski, who wrote and directed the thriller.

“Oh my goodness me. Guys —” Blunt began, in the self-effacing and adorably British manner that is uniquely hers.

“That truly has completely blown my slicked hair back,” she joked. “Thank you so, so, so much. I am so moved and completely lost for words and unprepared. I am going to share this completely with my husband, John Krasinski, because the entire experience of doing this with you has completely pierced my heart. You are a stunning filmmaker. I am so lucky to be with you and to have done this film with you.”

She continued saying, “Thank you for giving me the part. You would have been in major trouble if you hadn’t.”

Again, SWOON! Krasinski was, understandably, brought to tears by his wife’s speech, and we absolutely love him for it.

Blunt was asked in the press room about Krasinski’s “state of mind” in the moment when she won. “I’m going to have to ask him,” she teased.

“I think he probably was as shocked as I was because it was very unexpected,” she explained. “[It was] certainly not something I had planned for. I was pretty blown away.”

She also added that, funnily enough, she missed her husband’s huge reaction. “I’m also completely blind without my glasses so his face was a bit of a blur for me,” she said. Don’t worry Emily, the moment will forever be on the internet,t so you can experience his reaction in crystal-clear HD once you have your glasses back on.

Blunt also informed reporters backstage that many had warned her against working with her husband. But the joint project, she said, brought them closer together and strengthened their relationship: “My favorite thing about shooting A Quiet Place for sure was working with John. We had never done it before, and it is kind of the great unknown.” She continued, “You go into this process not knowing what it’s going to be like. A lot of people were like, ‘You’re going to be divorced by the end of it,’ but we were so much closer. I think the discovery of how we collaborated and could create something together was just so special.” Awww! 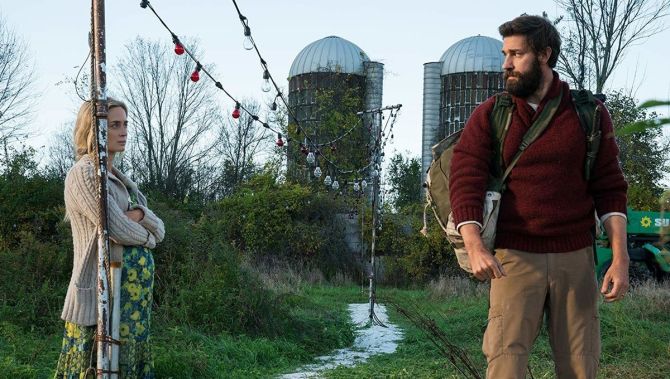 Krasinski ended the night the same way he started it: with an incredibly sweet Instagram post. “Very fittingly… no words.”

This also isn’t the first time Krasinski’s reaction to his wife’s success has gone viral. Just a few weeks ago at the 2019 Golden Globes, Krasinski won most supportive husband. 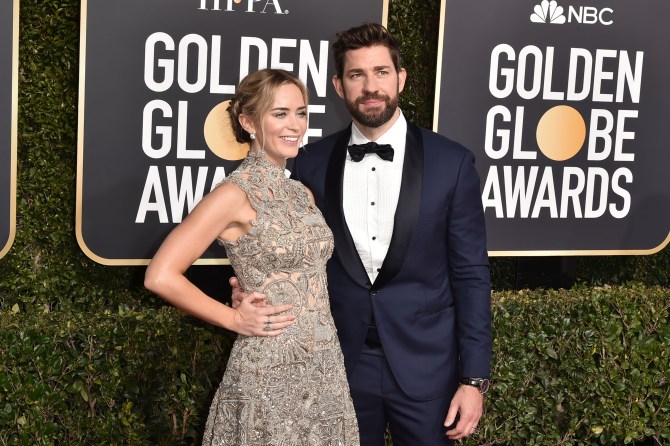 The couple stunned—as usual—on the red carpet January 6, 2019. And when his wife took the stage with Dick Van Dyke to present an award, Krasinski clapped and cheered proudly for Blunt. Of course, fans immediately started commenting on this adorable display of admiration.

“John Krasinski cheered on his wife in the crowd and Emily Blunt managed to find him and smiled y’all this is true love and I’m here for it,” one twitter user wrote.

“AND SHE WAS JUST ANNOUNCING!!! LOVE A HYPE MAN” another Twitter fan replied.

Another Twitter user put into words what we were all thinking: “I just want someone to love me and support me like John Krasinski does with Emily Blunt.”

But the love and affection is hardly one-sided. Just one look at Blunt’s loving gaze at her husband tells us everything we’d ever need to know. 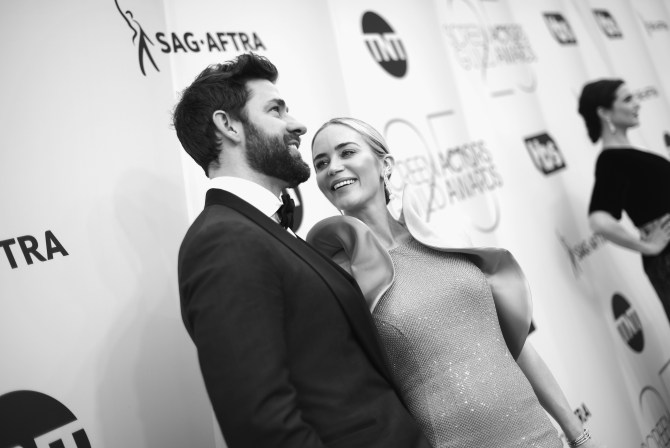 So there you have it—Kransinski and Blunt have set the bar and shown us all what it means to support your loved ones. Congrats on your win, Emily and congrats to the happy couple on being our #GOALS.