Awards season is officially underway, and while we’ll certainly be analyzing everyone that graces the various red carpets, we’ve decided to turn a more critical eye on 10 specific actresses we’re betting will make a splash all season.

Last week, we highlighted exactly who we’ll be watching, and why we’ll be watching them (see our full primer here), and on Monday we looked at who was crowned the red carpet champion of the Golden Globes (spoiler alert: It was Emma Stone in a Lanvin jumpsuit) now we’ll take a close look at how they did at the Critics’ Choice Awards, fashion-wise.

Granted, only five out of our ten chosen starlets actually showed up to the ceremony, but keep reading to see who won the carpet. 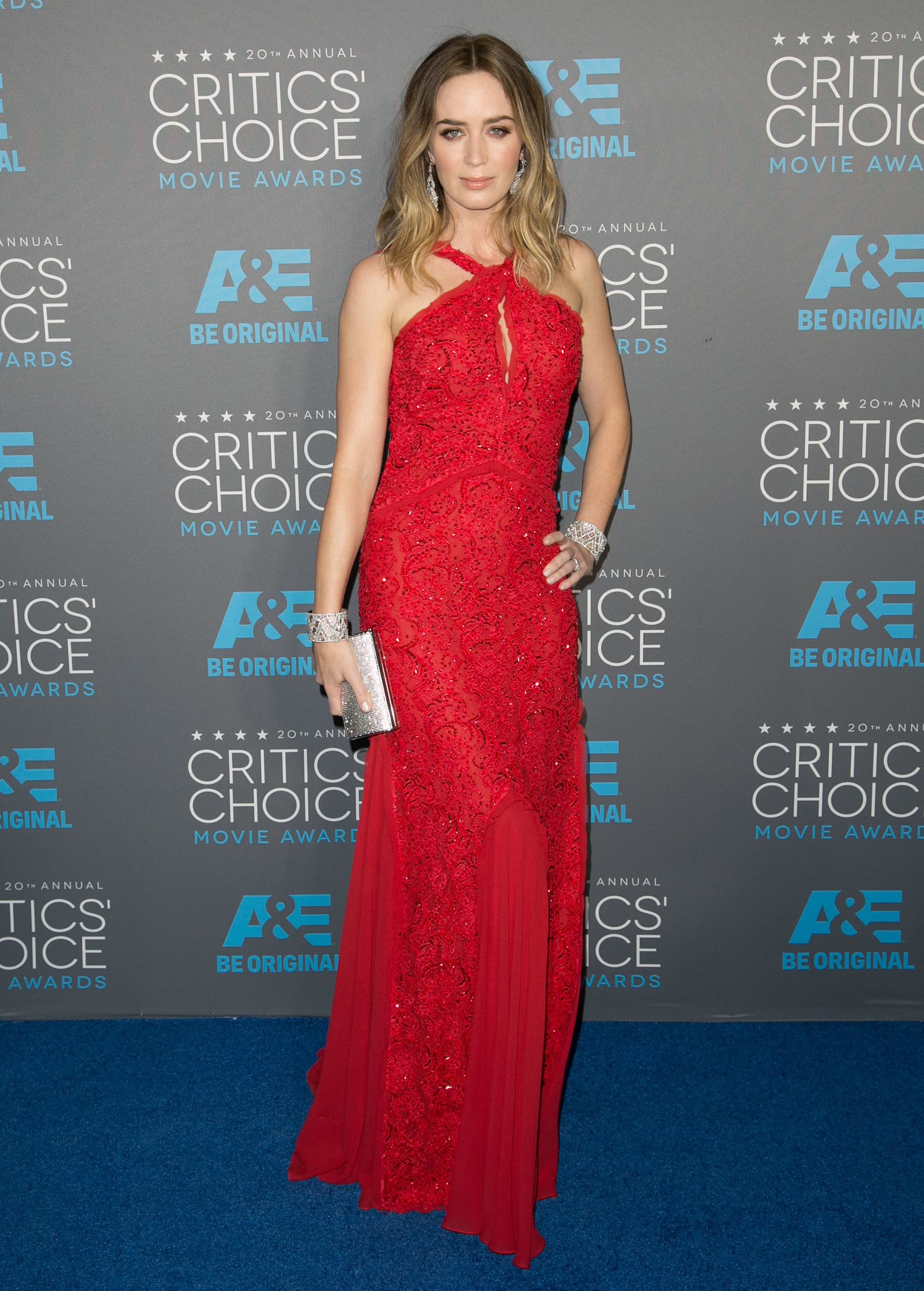 Emily Blunt
Girl’s on a tear! Emily’s been looking spectacular since she started promoting “Into the Woods,” upping her game with high-style looks by Dolce & Gabbana, Lanvin, and David Koma. At last week’s Golden Globes, she scored a solid A grade with her grecian white custom Michael Kors gown,  braided updo, simple makeup and jaw-dropping statement earrings.

Here, Emily proves you can go from ethereal to red-hot bombshell in no time—how amazing does she look in this Emilio Pucci number, with her modern textured hair?
Grade: A 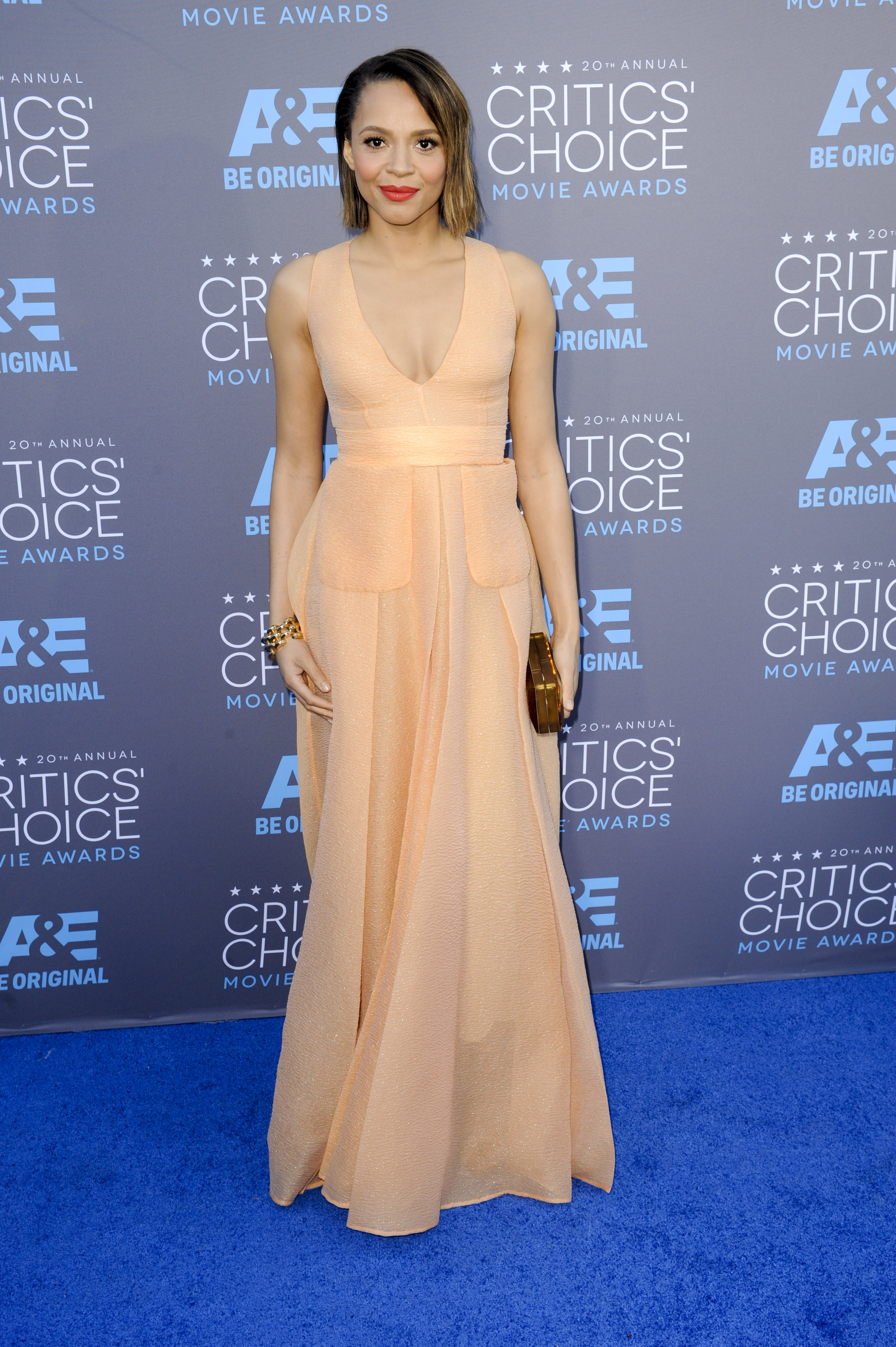 Carmen Ejogo
We called out the “Selma” star as one to watch—she’s in one of the year’s biggest films—but we were disappointed when she was a no-show at the Globes (or, at least, was oddly camera-shy.) She did show up to the Critics Choice Awards, looking lovely in floaty peach (pockets, holla!), though the dress did seem a tad springy (and a little large in the chest area, but that’s just us nitpicking.) Extra points for modern hair and glowy makeup.
Grade: B- 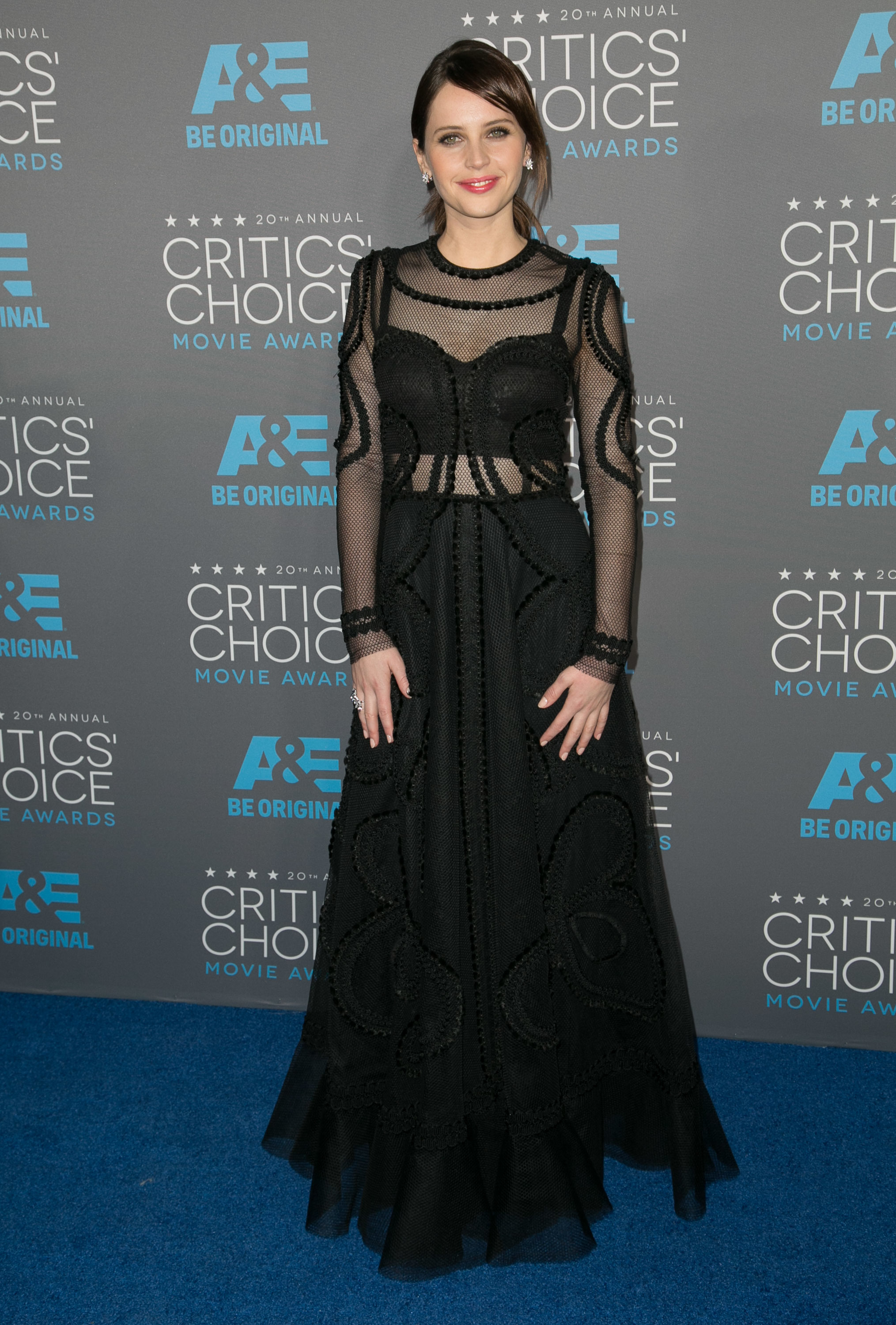 Felicity Jones
After her matronly turn at the Globes, it’s great to see the 31-year-old “Theory of Everything” star loosen up a little in this just-sexy-enough Dolce & Gabbana gown. We’re loving her messy ponytail, too. Sure, the netting could be a little tighter, but we’ll let that slide.
Grade: A- 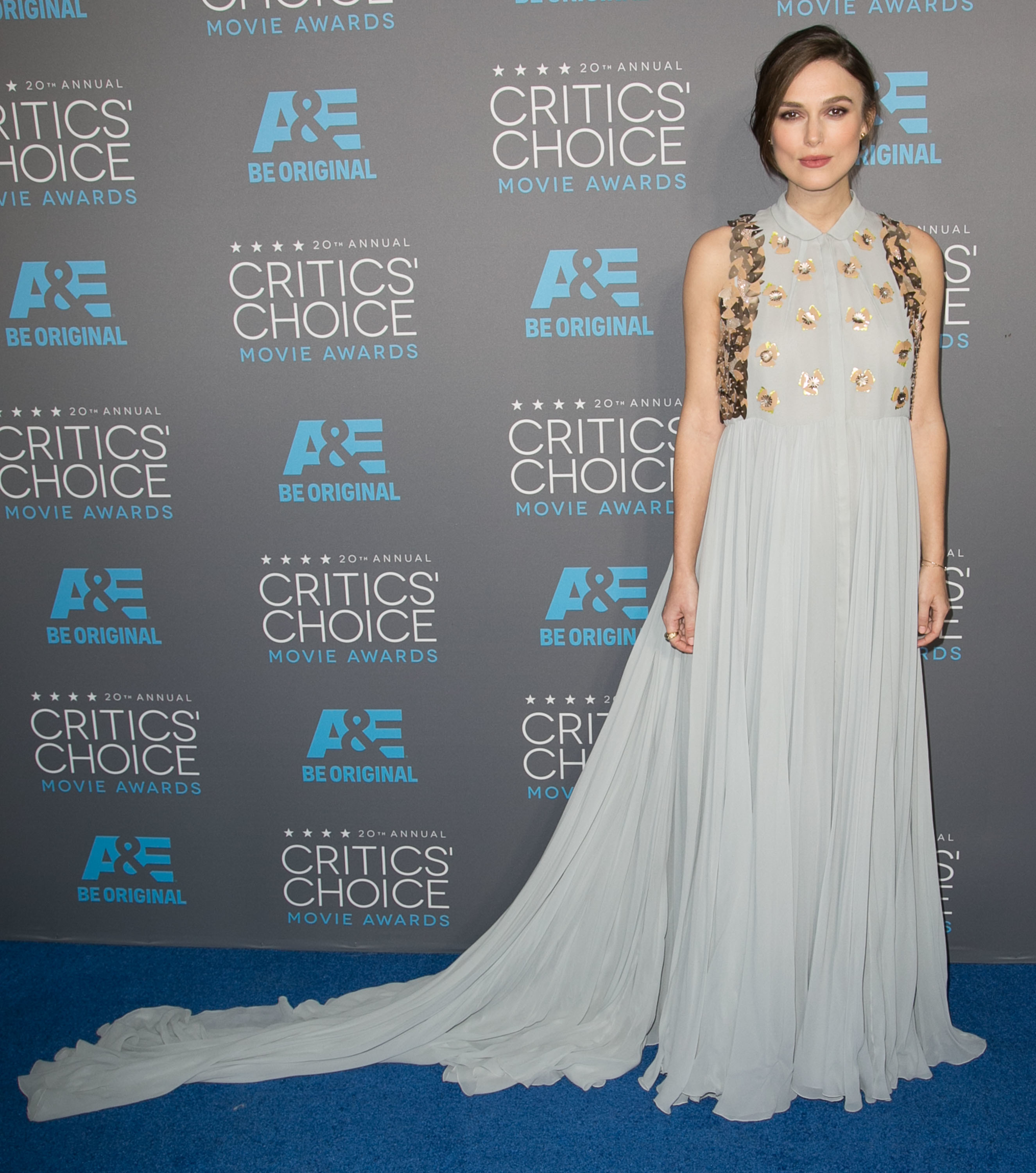 Keira Kinghtley
We weren’t huge fans of last week’s butterflies-and-ruffles Chanel dress, but the pregnant nominee got it right last night in this Delpozo gown. It’s not for everyone, but there’s no denying it’s so, so Keira.
Grade: B

Sienna Miller
The “Foxcatcher” star was a no-show, which means we have no choice but to give her failing grade. Boo.
Grade: F 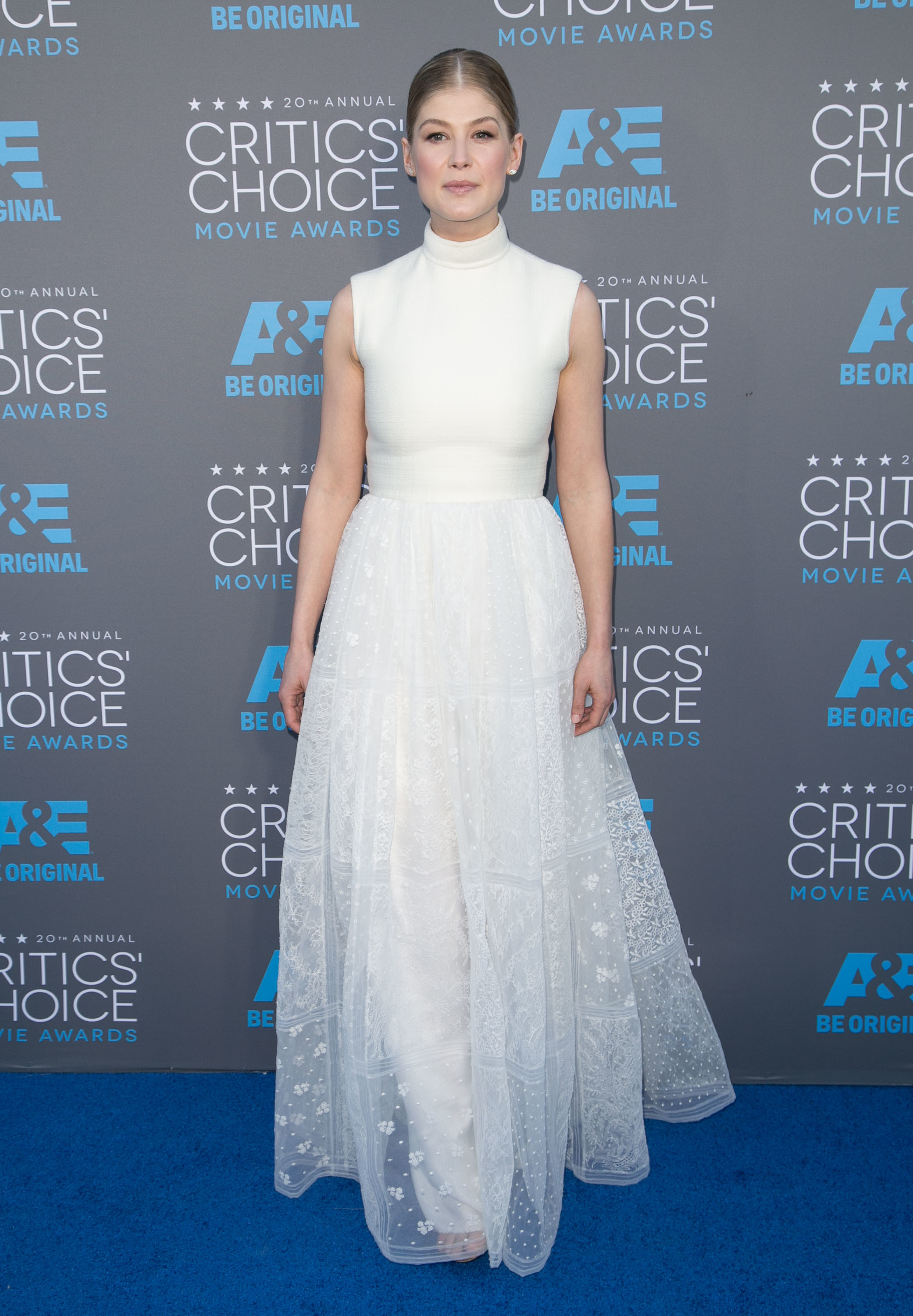 Rosamund Pike
Granted, this Valentino gown jives more with Pike’s regular aesthetic more than the sexy Vera Wang cutout dress she chose for the Globes, but we’re still not cheering. It’s a beautiful dress, and she’s obviously stunning, but we’re not nuts about the fit. And also: White again?!
Grade: C+

Saoirse Ronan
We were depending on the 20-year-old to bring a dose of youthful spunk to the red carpet, especially given her role in Wes Anderson‘s Globe-winning (and now Oscar nominated) flick “Grand Budapest Hotel” but she’s been a no-show to the Globes and the Critics Choice Awards. A real bummer, because during the promotion for “Budapest,” she stunned in Valentino, Proenza Schouler, Chanel, and Narciso Rodriguez
Grade: F

Emma Stone
The Oscar nominee won our Globes red carpet, but was a no-show at the CCAs.
Grade: F

Katherine Waterston
What the hell?! We were sure the 34-year-old—who officially became a star to keep a close eye on thanks to her super-sexy leading role in Paul Thomas Anderson’s eccentric 1970s-set “Inherent Vice”—would wow on the red carpet, thanks to her recent New York Times profile that crowned her a fashion It-girl, but no photos exist. Again, no choice but give her a failing grade.
Grade: F

Ruth Wilson
She gets a pass for not showing up—she’s a TV actress, and she’s currently on Broadway, so we’re giving her Incomplete.
Grade: I

THE WINNER: We herby declare Emily Blunt the red carpet champion of the 2015 Critics Choice Awards, with Felicity Jones mere inches behind her. Congrats, ladies!