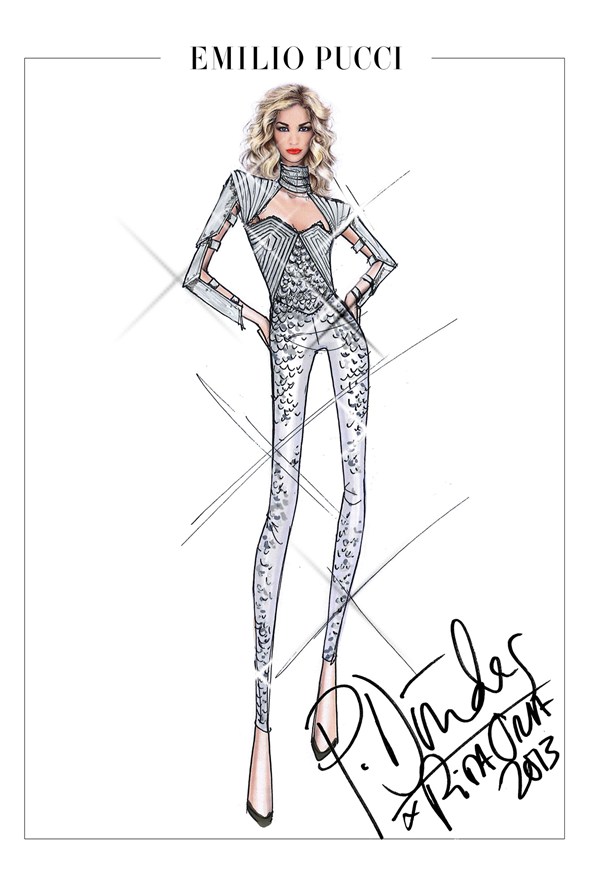 It’s not uncommon to hear about designers creating entire touring wardrobes for pop stars, but the fact that Rita Ora—a new kid on the block by music’s standards, as she only released her debut album less than a year ago—got storied Italian fashion house Emilio Pucci to design her costumes is a pretty big coup.

According to Vogue UK, the 22-year-old British singer worked closely with Pucci creative director Peter Dundas to create a series of looks to “perfectly echo her unique take on urban glamour”.

Ora debuted the first Pucci look in Manchester, England last night, where The Radioactive Tour kicked off. The costumes were designed with freedom of movement in mind to allow Ora to execute her choreography, and standout looks include a metallic armor-inspired bodice, a military camouflage jumpsuit and a flowing golden cape.

“I was thrilled to design the costumes for Rita’s Radioactive Tour, from the moment I met Rita we’ve had a great connection and doing something like this together felt like a natural progression,” said Dundas. “The costumes have impact and flamboyance in a way that feels personal to Rita whilst staying true to the Emilio Pucci aesthetic.”

Like countless pop stars before her, Ora’s slowly making herself known in the fashion world, as she’s replaced Alexa Chung as the face of sneaker label Superga, sits front-row at international fashion weeks, and is often spotted out and about with new BFF, model-of-the-moment Cara Delevingne.

Check out one of Dundas’ looks above, and head over to Vogue UK to see more select sketches of Ora’s tour costumes.