We lost a few good men and two incredible women in last week’s episode of Game of Thrones. It was definitely sad, but TBH—fans were expecting a blood bath (a la “The Red Wedding), so some were a bit…disappointed…? (Is that bad to say?) Don’t get too comfortable. Emilia Clarke just warned Game of Thrones Season 8, episode 5  is sure to bring some heat. The actress talked about her reaction to the episode with Jimmy Kimmel on Jimmy Kimmel Live. And—like so many of us—she got emotional watching it.

“[Watching it] that was the bit where I was shaking and crying,” Clarke confessed. “It was nuts. I mean, being in—what you saw was really what it was like shooting it,” Clarke continued, paralleling the behind-the-scenes experience with what we saw on-screen. “You saw blood and mud and angry, screaming people. And then backstage there was blood and mud—and asleep people.”

She went on to say that she, too, was surprised they didn’t lose more—no one really paid the ultimate price. “It was amazing we didn’t actually kill anyone,” she said. “It was extraordinary.” She did lose Jorah, and that moment was so rough to watch. Shout out to Emilia for some fantastic acting. But we also kinda knew that was coming, right? There was no way he was making it to the end, and he died protecting the woman he loved. So we don’t feel too too bad.

Like we said, don’t get comfortable just yet. Clarke went on to say that the final three episodes, particularly episode five, are going to be *LIT*. If you thought this 55-night shoot for the making of Episode 3 was huge, just wait, Clarke says. “Episode five is bigger,” the 32-year-old actress revealed. “Episode five is [big exhale]—I mean, four and five and six, they’re all insane, but like…Find the biggest TV you can.”

AHH. Are you totally freaking out?

Why do we need the biggest TV we can find? Just so we can see all of our favorite characters die? To watch the pain in their eyes up-close and personal? Catch us looking like this two Sundays from now when episode 5 airs:

Will Ferrell Miss You GIF from Willferrell GIFs

There’s no way both Jon Snow and Dany are making it out alive. We’re buckling ourselves in for a bumpy ride. 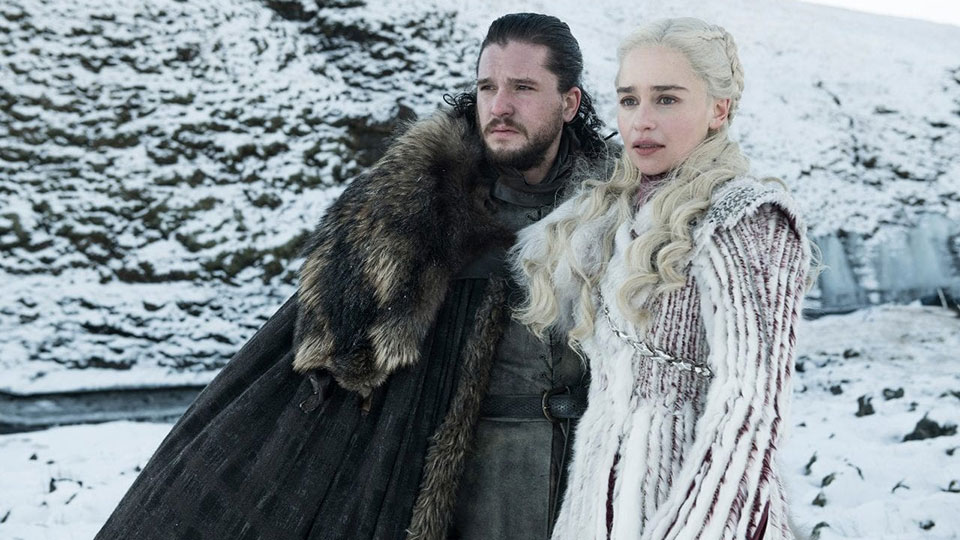