It’s one of the harsh truths of adulthood that New Year’s Eve isn’t actually as cool, glam, and romantic as we often idealized it to be when we were younger. That famous OC scene where Ryan arrives in the nick of time to kiss Marissa is fun to watch, but the majority of people don’t get to kiss their true loves in a penthouse with glitter falling all around as the clock strikes midnight. (Although we did get one surprisingly romantic story like that! See number four below.)

Ultimately, though, New Year’s is usually just another holiday that can either be fun and festive, or a major letdown. And, like most other Hallmark days, there are always overtones of love, dating, and romance—images from movies and TV shows that make us believe there’s some perfect midnight moment to aspire to. We’re here to assure you that if most of yours don’t look like that, you’re far from alone. Below, eight women share their hilarious, embarrassing, and unforgettable (even if they’d really like to forget) New Year’s Eve stories.

The kiss that followed was extremely brief and awkward.

“A few years ago, I was heading towards this guy I really liked to give him a New Year’s Eve kiss when then his friend totally cut me off and insisted that WE kiss. It was extremely awkward! I was pretty tipsy, and as I was walking over to the boy I ACTUALLY liked, his friend stepped right up to me, blocking my path and said, ‘So, should we . . . ?’ I believe my response was an actual shrug. The kiss that followed was extremely brief and awkward. I think he was—and probably still is—the kind of guy who’s used to girls fawning over him. If he only knew it was his preppier bestie I was after!” –Lucia, 26, Hoboken

“A few years ago, I was casually dating this guy for a couple of months when November rolled around, and I decided I wasn’t into it anymore. I gave him the ‘I’m really busy, not sure I have time to hang anymore,” excuse. He seemed cool with it, and since it had been so casual, I figured he wouldn’t think twice about me. I hadn’t spoken to him in over a month when, that New Year’s Eve at 2AM, he sent me a drunken text with several misspellings about how great I was, how much he liked me, and how he’ll never hear an Ed Sheeran song again without thinking of me. I was really surprised, but my feelings hadn’t changed. I never responded and always felt pretty bad about it—especially because Ed Sheeran has gotten really popular since then…” –Taylor, 28, New York City

I figured I was guaranteed a kiss at midnight, right? WRONG.

MORE: 13 Trends to Help You Ring in the New Year in Style

“I had one particularly disastrous New Year’s Eve a few years back in San Francisco. I’d been waiting forever for my heart’s desire—read: non-boyfriend—to invite my friends and me out with him. Finally, a week out, he half-heartedly mentioned their plans and that we could join if we wanted. A THOUSAND TIMES YES, obviously. One $200 dress I couldn’t afford and a $150 ticket into a heinous club party later, the big moment arrived. I figured I was guaranteed a kiss at midnight, right? WRONG. As the clock struck, I turned to see the guy overtly hitting on another girl. I proceeded to get rip-roaring drunk and eventually got separated from the group among the downtown crowds. Heels in hand, tears brimming, and words slurring, a kind gentleman and his concerned girlfriend took pity on me and let me share their cab. I was too drunk to even remember their names, but if you’re out there, you mysterious and kind San Francisco couple—thank you!” –Lucy, 29, Brooklyn

“One year, my now-husband and I decided to do New Year’s Eve separately—he had a ‘guys only’ group thing and I had a ‘girls only’ group thing. However, at the last minute, he changed his mind, and out of the blue at 11:30PM left his party on one side of the city and hauled all the way across town to find me. He made it there just before midnight so that we could have our New Year’s Eve kiss! Later, his friends told me that he didn’t even tell anyone he was leaving, he just walked out!” –Sophie, 31, San Francisco 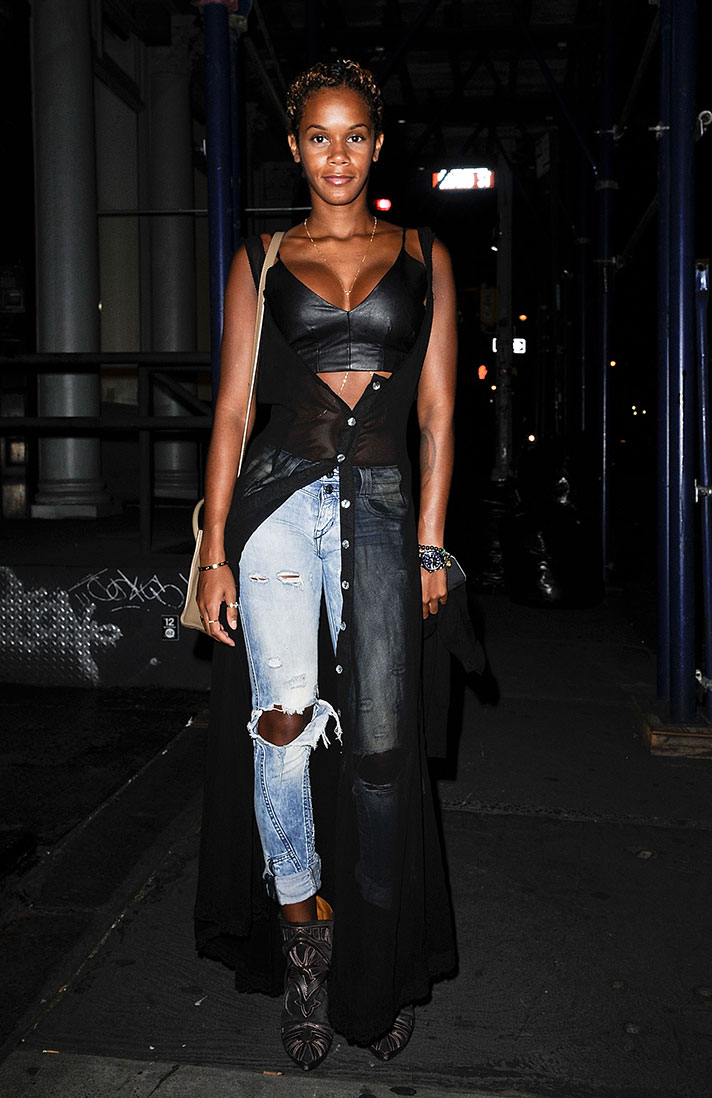 I don’t think we had sex that night.

“Last year, my boyfriend and I reunited with one of his college besties in Paris, with his new bride and their six-month-old baby in a chic, albeit tiny, flat. They invited us over for New Years Eve oysters and champagne before going to visit the Arc de Triomphe for a light show. Unfortunately, after arriving, we spent the entire evening listening to their baby SCREAM BLOODY MURDER. We both sat there, nursing flutes of deflated champagne and trying to give helpful baby tips we’d seen in movies: ‘Burp her maybe? I heard wiggling babies’ bottoms help? What about a little whiskey in her bottle?’ while really thinking, ‘Muffle her with the goddamn pillow already!’ Eventually, we all left, tucking the destructor of-all-things-good-and-fun in her pram, and as soon as we stepped out into the frosty air, she stopped crying and passed the fuck out in the midst of roaring drunk Frenchmen and women singing anthems and carols at the top of their lungs. I don’t think we had sex that night.” –Audrey, 29, Paris

“My best New Year’s Eve was when I spent the evening with my three soul mates: My ride or dies, the women who complete me. My now-husband and a couple other significant others were there, too, but my girls will always be my number ones. We started the evening playing taboo and laughing so hard that we were all crying, belly-aching, and gasping for air. Later, we went out to a bar to dance. When the clock struck midnight, we ladies had a four-way smooch and a group hug. We ended the night by walking home on the beach, heels in hand, under an actual blue moon. It was the first time we’d all been together in years—a symptom of post-college life—and it was perfect. For me, New Year’s Eve is not about amazing parties, perfect outfits, or midnight kisses; it’s about the memories you make with the people you love.” –Laura, 30, Indianapolis

We were pretty mortified at brunch the next day.

“A few years ago, my best friend visited me in New York City, where we’d decided to have a wild night to remember. She was having trouble getting over an ex, and had vowed to find someone to kiss at midnight. We got drunk on champagne and arrived at a crowded party, where I promptly lost track of her, being distracted by some ex drama of my own. By the time I found her it was almost midnight and she was half-falling-down and sloppily making out with some guy in front of a group of people who seemed half-amused, half-concerned. I got her into a cab and we both made it back to my apartment in one piece, but needless to say we were pretty mortified at brunch the next day.” –Sarah, 29, New York City

“I’ll never forget New Year’s Eve of ’97, when I first smoked a cigarette to impress a boy. I even remember my outfit—a copy of one Cher wore in ‘Clueless.’ The guy I was crushing on was the most handsome in my school, and everyone loved him, including me—sadly, it was unrequited. He was into another girl, but she was busy puking at that particular moment, so I was good enough to hang out with. We left the party to smoke cigarettes in an alley, and I thought I was finally in! We even went to see ‘Goldeneye’ the next week and I truly thought we would be soon married, but the next week, I couldn’t go out, and he went to see ‘Beautiful Girls’ with a different girl named Zoe, and just like that, it was over. My time with him was fleeting, but my time with cigarettes lasted a couple more years.” –Hillary, 34, Alexandria, VA

A version of this article was originally published in December 2016.