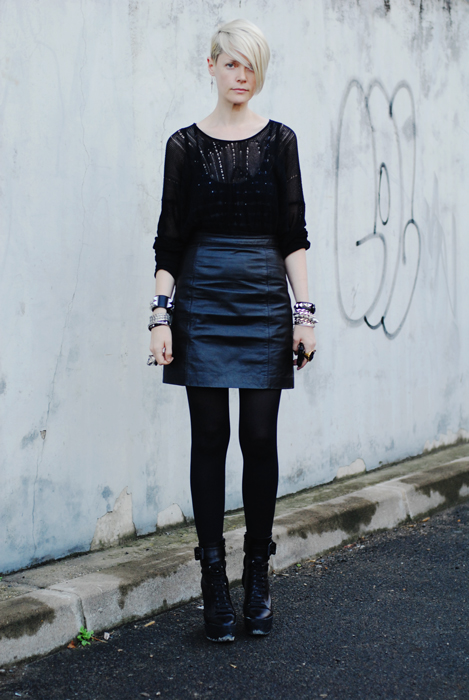 Whether you keep up with the seemingly countless media moves that are going down these days or not, odds are you’ve heard about a few. One that’s particularly of interest: Yesterday’s announcement that Kate Lanphear—Elle magazine’s style director—is leaving the publication. With her perpetually cropped blonde hair and strong sense of style, there’s a good chance you’ve seen Lanphear’s photo, either in the magazine itself or on hoardes of street-style blogs fond of snapping her edgy haute-punk aesthetic.

Whether it’s due to her slightly irreverent take on fashion or the fine work she’s done at Elle, it’s safe to say the fashion industry has a fervent obsession with Lanphear—as do rabid fashion fans, some who’ve dedicated their own blogs to her fashion choices. (Go ahead, type “Kate Lanphear personal style” into Google and see what you get). So, needless to say, it’s a pretty big deal that the big-name editor is departing the safe confines of a widely-read magazine like Elle—and hasn’t yet announced her next move.

We’ve been keeping close tabs on Lanphear since news broke last month this year that she was passed up for the Editor in Chief job at WSJ, after Deborah Needleman left to helm T magazine, following Sally Singer‘s abrupt departure (The gig ultimately went to Harper’s Bazaar executive editor Kristina O’Neill). So naturally, once we heard the news of Kate’s Elle separation, we’ve been batting around ideas about what her potential next move might be.

We’re no clairvoyants, but here are our best guesses as to where this talented gal will land:

1. Acting as creative director for a label like Theory
A number of factors could be at play when trying to figure out why so many fashion editors have recently made the leap from working at a publication to working in-house at a fashion label—more money, extra job security, new challenges, no eminent threat of print’s demise—and Theory seems like it could be an ideal fit for Kate for a number of reasons. Firstly, it was announced that Theory’s decade-long creative director, Leanne Fremar, is headed to Under Armour as the brand’s senior vice president and executive creative director for women’s, so there’s a high-level vacancy. Plus, Lanphear has experience styling for the label’s website, and she seems to be pals with Theory’s president Andrew Rosen, often getting snapped with him at various fashion shows and industry events.

What’s more, her personal aesthetic couldn’t be more cohesive with the direction the brand’s going in—especially since the label has gotten exponentially more “cool-girl” with the addition of Theyskens’ Theory,  Olivier Theyskens‘ higher-end collection. Furthermore, Theory is owned by Fast Retailing, a major Japanese company which also owns Helmut Lang, a label we could totally see Kate jumping into as well, handling the day-to-day creative direction under the brand’s designers (and Lanphear style twins) Nicole and Michael Colovos.

2. Heading up a less mainstream, more insider-y fashion publication
We wouldn’t be surprised to learn that Kate’s gone the way of a less mass-market magazine and/or its corresponding website, along the lines of Carine Roitfeld‘s new print venture, CR Fashion Book, or any number of similarly creative insider publications, such as Dujour, Love, Visionaire, Wonderland, Purple, Flaunt or Dazed & Confusd. True, some are based abroad, but since Kate—an American—got her start in Australia, maybe she’d relocate for the right opportunity. Of course, there’s always a chance she’s jumping ship to another widely-read fashion publication, such a W, which seems to be undergoing some staff changes.

3.  Venturing out on her own as a consultant
Plenty of former fashion editors have a history of venturing out on their own, whether in the form of starting their own fashion consulting firm or publication, becoming sought-after independent stylists, or parlaying their influence into television appearances and and high-profile freelance projects. This might make sense for Kate, whose established reputation in the industry could ensure her success.

Whatever Lanphear decides, odds are her move will be a big one (and inevitably covered by sites like us!).