Elle Lorraine was on the 101 freeway in Los Angeles on the way to visit a friend in Calabasas when she received the call that she booked the lead role in Hulu’s Bad Hair. “I literally had to pull over off the side of the freeway and scream,” she tells StyleCaster.

Lorraine received the script for Bad Hair—a comedy-horror about a woman named Anna who’s possessed by her hair and kills those around her—from Justin Dimien, the writer and director of Bad Hair who worked with her in Netflix’s Dear White People. “I was immediately obsessed. I was like, ‘What the hell is this? What is going on in Justin’s mind and how do I get it?’” Lorraine recalls.

However, just because Lorraine had worked with Simien before didn’t mean she was confident the part was hers. “I didn’t think I had an upper-hand. I knew other actresses were going in for the role. Some he worked with before and some of the biggest names in L.A.,” she says. “I knew I didn’t have the name to bring to it. I only had myself and my instrument. I had to literally fight for it, show up and prove that I am Anna.”

Like Anna, an entry-level employee at a music network who’s pressured to get a weave to climb the professional ladder, Lorraine was also told a weave would help her career as an actress. “When I first moved to L.A., everyone was telling me I needed to get a weave,” she says. “I already had straight relaxed hair, but it wasn’t too long and it was a little thin, so I think it was coming from a place of ‘present your best self. I’d never had that before. That’s how I got introduced to that style in the first place, and I knew the underlying subtext behind it was ‘these are the standards of beauty if you want to pursue this career. So come on. Join in.’” 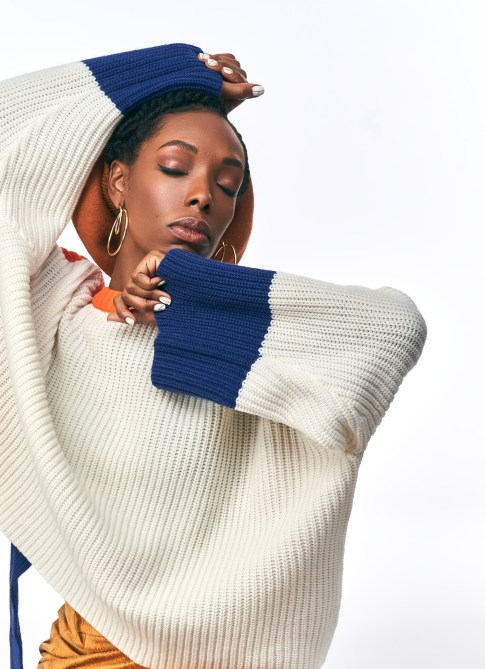 Though Bad Hair is equal parts scary as it is funny, Lorraine wants viewers to take away an important message from the film. “Like the hair is implying, so many issues are systemic, and the way for it to change is to shine light on them and to have conversations about it,” she says.”We can be playful about it and make fun of the situation like the movie does. But that’s only used as a tool and a vehicle to spark change and to really open a dialogue. In doing that, we can change the way the world and society operates little by little. We all have that power.”

Ahead, Lorraine talked to StyleCaster about her own natural hair journey, how Bad Hair changed her relationship with her hair and her “girl talks” with Kelly Rowland.

On her own natural hair journey

“Growing up, I got relaxers my whole life. As a child and into college, I didn’t have a personal relationship to my natural hair, which so many Black women have as part of their story and history. At some point in my life, I decided I wanted to try something different. I was going to go on a self-exploration to get to know who I am on a deeper level. Subsequently, on that journey, my hair became a part of it too. I was reading different materials and soul-searching and questioning different things about religion and how I view the world and as a result, I wanted to get to know my whole self, so I cut off all my hair and then I decided to let it grow naturally. This is before the full natural hair movement, so I didn’t have that many guides. I didn’t have a lot of YouTube videos to teach me. There was a lot of trial and error. A lot of trial and error. And a lot of learning to be patient with myself and to see myself as beautiful in the mirror without what I always identified with beauty. Before that, I was getting the tracks and the weaves and trying all that. Don’t get me wrong. I love mixing up my hair and that kind of thing, but it’s from a different place now. It’s from a place of protecting my hair now. It’s from a place of knowing I am beautiful no matter what. I am beautiful with my hair the way it grows out of my head and I have the ability to put on different costumes at the same time.”

On how Bad Hair changed her relationship with her hair

“After the film, I started to get to the place where I’m really protective of my natural hair. I wasn’t trying styles outside of my natural hair for a while. I hadn’t worn braids. I hadn’t done twists. But since the movie, I’ve felt a lot more free to go back and explore different styles. I’ve been wearing twists all summer and other style elements and exploring my hair that way. My hair is in some really cute twists right now. I do different styles everyday and play around. I legitimately think of it as my costume.”

On how her hair journey mirrored Anna’s

“When I got the weave, my team at the time was like, ‘Oh, yeah! You look so beautiful.’ I kept hearing ‘beautiful’ now in a way I hadn’t heard it before. Then when I went to natural, and I had a lot of people telling me, ‘Well, you need to have a backup wig.’ I had never owned a wig at the time. I was realizing people were still struggling with it, but I was determined at that time to live my honest self and find myself as beautiful, despite what everyone else thought. But the world has also been changing over the last few years. So many Black women are expressing themselves. It takes that repetitive vision for someone to break down the ideals of beauty that happen before it. Now, look at it! Now we have all kinds of people perming their hair to look like our natural hair. That’s become a part of culture.”

On what the hair monster represents

“I think it symbolized the insidious pain that, at some point, protects you from the outside world but eventually comes back to infect you. It symbolizes the pain that we, as people, take on from our history, from mainstream media that we digest and, in turn, bear and have to redefine to ultimately rediscover ourselves. The idea that everything leads back to you. It leads back to Anna reclaiming her own power and her own identity.” 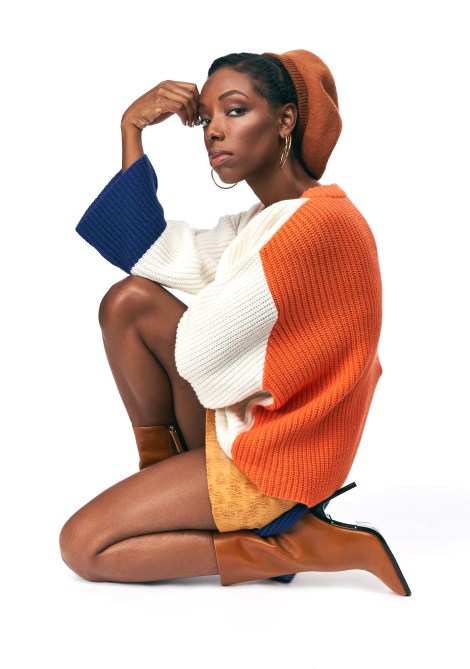 On the meaning of the title Bad Hair

“It’s a play on words. It’s to imply one thing, but to  say another. I don’t think there’s such a thing as bad hair, but in this context, the bad, on the outside, does mean the horror that’s displayed. But in actual hair, no, there’s no part of us that is bad. We’re all incredible creatures, and we’re individually unique. In finding that beautiful and in finding how to express ourselves, we shine brighter in that uniqueness.”

On what the hair monster was made of

“It was incredible! We did mostly practical effects. Nearly everything was happening in real time. There were thousands of hairs and spools of hair that our team was working with. Even as the hair was doing what it was doing, there were puppet masters controlling it and we’re working in tandem with each other, almost like choreography, to make it happen. They would interweave things and place them places. There was so much hair that went into it. I had so many different wigs and there were so many different people working the mechanics. It was incredible.”

On “girl talks” with Kelly Rowland

“There was a day on set that Kelly was there, and we did a girls’ day in one of our trailers. We all just sat around during lunch and just talked and got personal and just had girl talk. Kelly Rowland was one of us. Of course, she’s the Kelly Rowland but she presented herself as just a human and put her guards down. That was one of the most sincere days I had on set because we all became a family. That whole cast was very familial-like. It was very protective.”

I am beautiful with my hair the way it grows out of my head.

On going to the U.S. Open with Vanessa Williams

“Vanessa Williams and I both love tennis. We talked about it everyday. The U.S. Open was on at the time. She goes every year. One day, she called me. She was in New York for fashion week. She was like, ‘Hey. I have an extra ticket if you’re willing to come.’ So I hopped on a flight later that night, a red eye to New York, after we finished shooting. I didn’t get to go home to get clothes or anything because this was a bucket list moment for me. Then I got to go to the U.S. Open championships game with Vanessa Williams, which was legitimately a dream come true.”

On the career advice Blair Underwood gave her

“One of the most amazing moments and pieces of advice I got was from Blair Underwood. That was early on in us shooting. Blair told me, ‘I think it’s really important that you preserve your energy and protect your energy and your space.’ He was saying, ‘I always go back to my trailer during lunch just to get some quiet time and some down time.’ That was really helpful to me because the days prior I had been hanging out with the crew and cast during lunch because I’m such a social butterfly. In order to preserve myself for weeks at a time with shooting all those hours a day and without getting as much rest, I would burn out. I took that advice and I used it throughout the entire thing. That’s something I apply in my life and I’m so grateful for that because I definitely would have burnt out at some point.”

Bad Hair is available to stream on Hulu.