Much to my surprise, tons of celebs ended up dressing up to tune into this year’s Zoom Awards—I mean, Golden Globes. Exhibit A? Elle Fanning may not have actually been at the Golden Globes this year, but the socially-distanced show didn’t stop the actress from donning a show-stopping gown to commemorate the occasion. Actually, Elle Fanning’s Golden Globe 2021 look was one of my favorites of the entire night. Who says that virtual shows can’t have some pretty killer fashion?

I miss the days when red carpet looks actually took place on the red carpet, but with only the hosts, presenters and a few nominees attending IRL this year, most celebs had to dress up and enjoy the night from home. That said, they still served looks! To celebrate the official start of awards season, Fanning “showed up” in a stunning custom mint green silk Gucci gown—via her Instagram, that is.

In a series of just pics posted to her ‘Gram, Fanning looked every bit a queen in her ensemble. “Dressed up for a night in for the @goldenglobes Thank you to my beautiful hair and makeup team on the show @erinayanianmonroe and @glynnlorraine They transform me into Catherine every day on set and are a part of this special day!” Fanning captioned the photos. Consider me royally impressed. Fanning was nominated for her performance in The Great, but I would say that this look is more than just great. It’s pretty damn amazing. 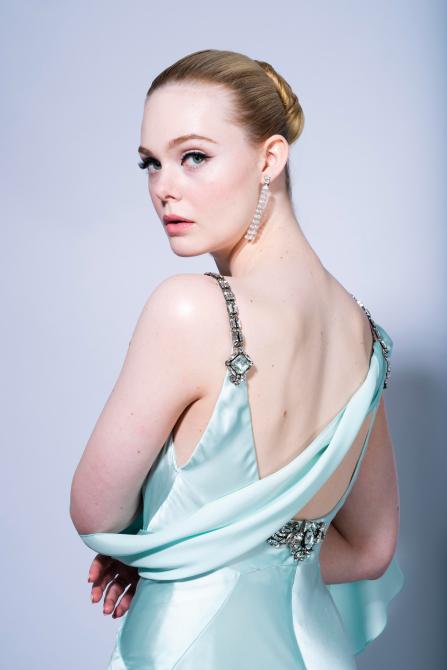 I don’t love the expression “fits like a glove,” but call Fanning a hand, because this thing really does fit her like a glove! Satin isn’t always the easiest fabric to rock, but Fanning was an absolute dream in it, and this minty hue really suits her complexion. In addition to the actual gown, her accessories were seriously worth mentioning, too—Fanning was literally dripping in Fred Leighton diamonds. 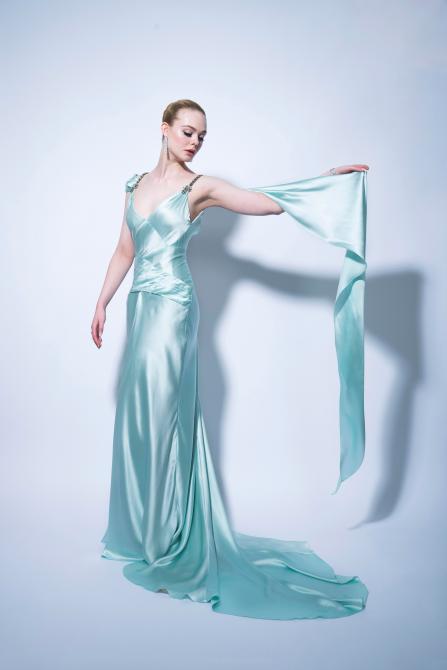 Fanning completed the look with a pair of Gucci platform sandals, but kept her beauty look super striking and classic. Her hair was pulled into a tight bun and her skin was glowing with that first-time-nominee radiance. We really love to see it!

I honestly expected Fanning to wear a more traditional gown to the awards, but this one has the perfect blend of retro flair and modern goddess to suit her young, fun energy. And what can I say, I’m a sucker for the detailing at the waist and the embroidered crystal brooches! So luxe. I also just love the little sash that made the whole gown ripe for dramatic posing. Quick, somebody carve this moment in stone to preserve it forever! It’s just that perfect.

Bravo to Gucci for making Elle one of the best-dressed celebs of the night without her even having to attend the show IRL. Now that’s power.