Ella Henderson had just returned to her flat in London after three weeks at her parents’ house in northern England when the idea for “Dream on Me” came to her. “It’s been a weird one because the summer that’s gone by is the summer we’ve kind of missed,” Henderson tells StyleCaster.

To remind her of summer, which she normally spends performing at music festivals in Ibiza, Henderson put on a playlist of old dance records. One song that came on was DJ Roger Sanchez’s 2001 hit “Another Chance,” which is interpolated in “Dream on Me.” “When I went into the studio eventually, I was like, ‘Let’s strip the track apart,’” Henderson says. “I got on the microphone and ended up singing this melody. The lyrics came quite quickly. In about 40 minutes, we’d written a song.”

But “Dream on Me” still needed something else. So Henderson reached out to Sanchez, hoping that he would work with her on the track. “I was like, ‘This will go one of two ways.’ Either he’s going to like the idea or he’s going to be massively insulted by the fact that I tried to even touch this record because it’s such a dance banger already,” Henderson says. “Thank God he was an Ella Henderson fan.”

And thus “Dream on Me” was born. Though Henderson wrote the song as a dance track to be played at clubs and parties, ultimately, “Dream on Me” was inspired by her quarantine experience and her desire to be surrounded by her loved ones again.“The song is about being apart from someone, and that is kind of lockdown inspired, whether it be a relative, a loved one, a friend,” she says. “When I wrote it, it was one of the hottest days of the year, and I was just really missing my friends, socializing, going out to a bar and being with them. I feel like we all just craved a night to be together and what that would feel like to have that reunion. Out of that was born my dreamworld of ‘Dream on Me.’”

Ahead, Henderson talked to StyleCaster about the inspiration behind the lyrics of “Dream on Me,” her dream collaborations and the time she almost performed with Adele on The X Factor.

On what inspired the title “Dream on Me”

“Normally, when I write and record, one thing happens before another and it’s either the melodies come first or the lyrics. With this, the chorus came really quickly, and I instantly started singing, for some reason, about a dream. Dreaming about what a summer would be like this year if we all could be together. At the time, I was missing my friends. There’s something nostalgic and Ibiza-esque about it. This summer I got to miss out. Normally, I go to Ibiza every summer and do the festivals. This song is like my little injection into the music industry for my fans, like ‘Here’s the festival season we missed out on. You can go into your own little world and have a little six-man party.’ Don’t get me wrong, I sit at my piano and write many a ballad, but I think right now, people just want to feel positive. There’s a lot of heavy stuff going on in the world. I love Ariana Grande and Lady Gaga’s ‘Rain on Me’ and Sam Smith’s new record ‘Diamond.’ Anything that feels a bit more empowering. I wanted to put out an empowering record.” 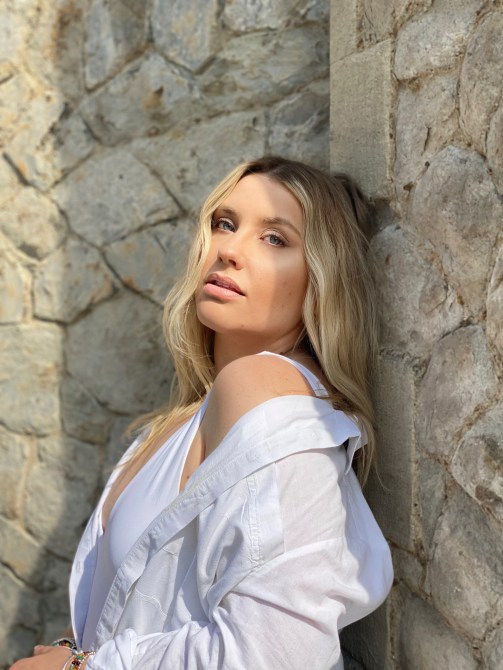 On her dream collaborations

“I really want to collaborate with Pharrell and Bruno Mars. They’re on my bucket list. I would love to do something with Mark Ronson as a producer. It would be interesting if he and I got in the studio. I love what he did with Miley, with ‘Nothing Breaks Like a Heart.’ I’m a massive fan of country music. One of my favorite, go-to musicians is Kacey Musgraves. I love Beck as well. When he released that song with her, I was like, ‘Oh my God. If I did a song with him, I’d love for it to be a song like that.’ Adele is literally still there on the bucket list, but I’m not even worried about singing with her. I just want to meet her. Like everyone else, she seems like a good bundle of fun.”

On how she almost performed with Adele on The X Factor

“When I was on X Factor, at the time I was favored to win, she tweeted me saying something nice about my voice. We spoke publicly on Twitter, but no, I never met her. At the time, if I was going to go through to the finals, they were trying to get her to come on as a guest performer with me. But that never happened in the end. I ended up coming off halfway through. Still that has to be somewhere in the universe for me to cross paths with her.”

On the inspiration behind the “Take Care of You” music video

“In lockdown, there was not a lot to do other than get my family involved. I was like, ‘OK. How can I do my music video from home?’ Ultimately, I wanted the lyrics and the meaning of the song to come through the most. This song is very much about how I can wake up one day and feel on top of the food, but also I can wake up one day and feel so crappy about life. My director was like, ‘That’s exactly what we should do.’ I was capturing and documenting and going through old stuff of me growing up in the home I was in during lockdown, so that was nostalgic to do. Finding videos of me riding a bike and redoing it and refilming it now. It was my way of putting out there that we don’t always feel the best version of ourselves. That is completely OK. I think a lot of us experience that in lockdown.”

On her plans for an EP

“We had the set dates to release my EP this year, and it’s ready to go. It’s still ready to go, but the coronavirus changes everything up. I was supposed to do a tour next year that we were due to announce at the end of the year. Obviously, that’s had to move and we’re rescheduling it at the moment. I’ve been taking every day as it comes. I feel like, releasing a full body of work, while not being able to even get to a show and do a gig for my fans, it would feel super weird. Obviously, the longer this goes on, I’ll have to figure out a way of doing that. I’m hoping that next year, when I do end up sharing the body of work I’ve created, I can get up and do some shows. Because I’m ready to tour again. I’m ready to get on the road.”