There were plenty of stylish moments at today’s ceremony in Washington D.C. Sure, I loved Michelle Obama’s raspberry look and Dr. Jill Biden’s tweed dress, but there was one outfit I couldn’t stop thinking about from the moment it briefly appeared on my television screen. The look in question belonged to the stylish Ella Emhoff, and if one thing is for certain about the next four years, it’s that Kamala Harris’ step-daughter is about to be everywhere. Fashion community, meet your newest obsession.

Among the throngs of people descending the Capitol steps just ahead of Joe Biden and Kamala Harris’ inauguration this morning, Ella Emhoff stood out as one of the best-dressed attendees by far. The 22-year-old looked stunning in a Miu Miu coat adorned with orange crystals across the back and shoulders, complemented by an oversized white lace collar. The internet, understandably, lost its collective mind. She didn’t just look cute—she looked high-fashion, dahhling.

Underneath the coat now seen ’round the internet, Emhoff donned a ruffled maroon midi dress by New York City-based designer Batsheva Hay. She accessorized with a simple black headband by Loeffler Randall, still in stock on the brand’s site as we speak. It probably won’t be available for long, so try and snag one while you can. 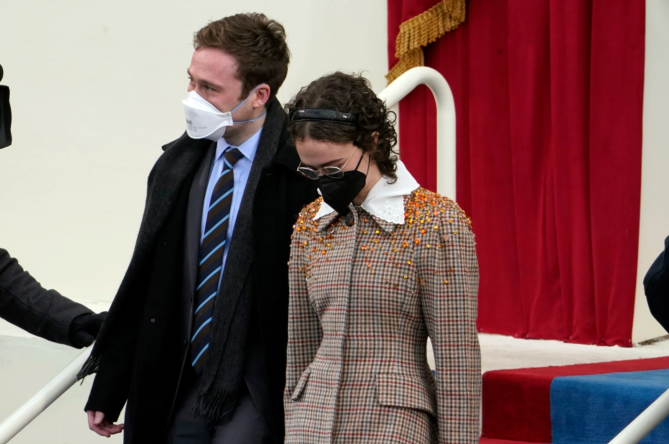 If you’ve been keeping up with Emhoff at all over the last few months, you know that this outfit was not an anomaly. It’s but one amazing look in a slew of many, some of which she has shown off to her 107K followers on Instagram, and others of which have appeared in a myriad of TikToks dedicated to her persona. Emhoff has also become a mainstay on TikTok, with tons of users praising her unique sense of fashion and Gen Z je ne sais quoi.

She doesn’t just like wearing fashion, though—she creates it, too. Like all cool kids, Emhoff is currently enrolled at the Parsons School of Design in New York City, where she’s pursuing a degree in Fine and Studio Arts. She also makes and sells her own clothing with a focus on unique knitwear, and has even hosted raffles for followers to win her pieces right on her Instagram account.

Emhoff’s website includes instructions for placing custom orders from her brand, but the site is currently “under construction” and she is no longer accepting orders. This is, possibly, because her family has just broken the internet and she has a lot! going! on! With the VP as her Mamala, Emhoff has been thrust into the public eye.

If you’ve never seen her before, there’s a reason for that. Prior to now, Emhoff kept a relatively low profile for most of the Presidential campaign, only truly blowing up online around the time the Biden/Harris ticket was declared the official winner of the election. It wasn’t long before she gained an allegiance of loyal fans across the internet thanks to her laid-back attitude and style, though.

The sky is the limit for Emhoff and her future career as a fashion designer now that she’s gained national critical acclaim. And personally, I can’t wait to see what she wears next. She’s recently been spotted in pieces by Thom Browne, so I officially want her entire closet—or at the very least, a meeting with her stylists, Jill Lincoln and Jordan Johnson.

If her ensemble today is any indication, Emhoff will continue to support both female and up-and-coming designers while she’s in the public eye and emerging as an up-and-coming designer in her own right. I love her edgy look, and between Emhoff and Joe Biden’s granddaughters, it looks like the White House-adjacent young women in both  families will lead the way when it comes to standout sartorial moments over the next four years.

In the meantime, though, I’ll just keep refreshing Emhoff’s site until I can order a piece of her knitwear for myself.