If you’ve been a fan of the Marvel Cinematic Universe for a long time, you may be curious about Elizabeth Olsen’s net worth and how much she makes as Wanda Maximoff/Scarlet Witch in Doctor Strange in the Multiverse of Madness and other MCU projects.

Olsen, the younger sister of Mary-Kate and Ashley Olsen, made her Marvel debut via a post-credits cameo in 2014’s Captain America: Winter Soldier but it wasn’t until a year later in 2015’s Avengers: Age of Ultron that fans really saw what Scarlet Witch had to offer. In Avengers: Age of Ultron, Olsen starred as one of the two Maximoff twins (Aaron Taylor-Johnson played her brother, Pietro/Quicksilver.) As Hydra test subjects, both Wanda and Pietro have superpowers. Pietro has the power of superspeed, while Wanda has telepathic and telekinetic abilities.

In January 2021, Olsen starred as Wanda in Marvel’s first TV series on Disney+: WandaVision. The show, which also stars Paul Bettany’s Vision, follows Wanda and Vision as they live in the suburbs of a town called WestView, as they try to hide their powers. She earned her first-ever Emmy nomination for the role in July 2021. Though she confirmed there won’t be a WandaVision season 2, she still appreciates the series for its deep dive on the character.

“I never thought I would have this opportunity, and I am so grateful to get to have spent this many hours with her now. I feel like I can do anything with her now,” she said. “Someone I was talking to was saying that’s what is so interesting about the character is you don’t know if she’s a hero or a villain — and that’s kind of the point of that character in the comics. You can’t define her as either. The only person that can hurt her is herself. I just love getting to play her because of those complexities.”

Of course, Olsen’s career doesn’t only include her MCU projects. From indie films like Marcy Marcy May Marlene and Ingrid Goes West to blockbusters like Godzilla. Olsen is also no stranger to TV, having starred in Facebook Watch’s Sorry For Your Loss, which she also served as an executive producer on. Ahead is what we know about Elizabeth Olsen’s net worth.

How much does Elizabeth Olsen make as Scarlet Witch? 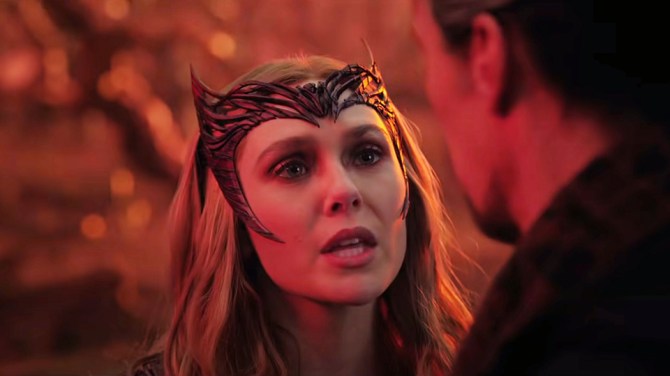 According to THR, Olsen, as well as Paul Bettany (Vision), Anthony Mackie (Falcon), Sebastian Stan (Winter Soldier) and Jeremy Renner (Hawkeye) negotiated deals separate from their movie contracts for their Disney Plus series, which are between six to eight episodes. Olsen and Bettany star in WandaVision, while Mackie and Stan star in The Falcon and the Winter Soldier. Renner stars in Hawkeye.

According to Puck News, a newsletter created by former Hollywood Reporter editor Matthew Beloni, Olsen’s Doctor Strange in the Multiverse of Madness co-star, Benedict Cumberbatch, who played Doctor Strange, made $7.5 million for the Doctor Strange sequel after making $5.5 million for the original Doctor Strange. In 2016, Deadline reported that Doctor Strange was the “biggest single-character introduction in the Marvel Cinematic Universe” and had made more than movies like 2008’s Iron Man and The Incredible Hulk; 2011’s Thor and Captain America: The First Avenger; and 2015’s Ant-Man. Doctor Strange was also ranked 11th on Deadline’s 2016 list of the “Most Valuable Blockbusters.” According to Boxoffice Pro, Doctor Strange in the Multiverse of Madness is expected to earn between $190 million to $210 million in the United States and Canada on its opening weekend, with a total domestic gross of $450 million to $560 million.

If Olsen’s salary is in the seven figures, it’s still a a lot more than what most Marvel Cinematic Universe actors made for the first MCU movies. According to Business Insider, Chris Evans, who plays Steve Rogers / Captain America, made $1 million for 2011’s Captain America: The First Avenger, while Chris Hemsworth, who plays Thor, made $150,000 for 2011’s Thor. According to The Hollywood Reporter, Robert Downey Jr., who plays Tony Stark / Iron Man, made $500,000 for 2008’s Iron Man. The Hollywood Reporter also reported that Chadwick Boseman, who played T’Challa / Black Panther, made $2 million for 2018’s Black Panther, while Brie Larson, who played Carol Danvers / Captain Marvel, made $5 million for 2019’s Captain Marvel. According to The Daily Mail, Tom Holland, who plays Peter Parker / Spider-Man, made $500,000 for 2017’s Spider-Man: Homecoming, while Chris Pratt, who plays Peter Quinn / Star-Lord, made a “low seven figures” for 2014’s Guardians of the Galaxy, according to Forbes.

What is Elizabeth Olsen’s net worth?

The question Marvel fans want to know: What is Elizabeth Olsen’s net worth? Well, according to Celebrity Net Worth, Olsen is worth a massive $11 million. (Her WandaVision costar, Paul Bettany, in comparison, is worth $50 million, while Benedict Cumberbatch is worth $40 million.) Most of Olsen’s net worth is expected to come from Marvel projects like WandaVision, Avengers: Endgame and Captain America: Civil War. However, Olsen also has an executive producer credit in Facebook Watch’s Sorry For Your Loss, which is sure to bring in tons of cash in addition to the salary she’s paid to star in the series.

WandaVision is available to stream on Disney Plus. Here’s how to watch it for free.