Holmes was born on February 3, 1984, in Washington, D.C. Her mom, Noel, was a Congressional committee staffer, whereas her dad, Christian, was a vice president at the energy giant Enron before moving onto government positions at agencies like USAID. When she was a child, Holmes and her family moved from Washington, D.C. to Houston, Texas. Even at an early age, Holmes had an instinct for invention, often filling up entire notebooks with drafts for plans and designs. “What I really want out of life is to discover something new, something that mankind didn’t know was possible to do,” she wrote in a letter to her father when she was just nine years old.

Throughout high school, Holmes had a habit of staying up late to study on a regular basis. She soon rose to the top of her class and even launched her own business, selling C++ compilers (software that interprets computer code) to Chinese schools. Holmes began taking Mandarin courses in high school and convinced Stanford University to admit her into their summer program, which ended in a trip to Beijing.

It was around this time that Holmes decided she wanted to pursue medicine like her great-great-grandfather, a surgeon. However, she quickly realized that she was afraid of needles. Later, Holmes revealed that this is what inspired her to launch her company, Theranos, which sought to revolutionize blood testing with technology that purportedly required only a finger pinprick to detect medical conditions from cancer to high cholesterol. 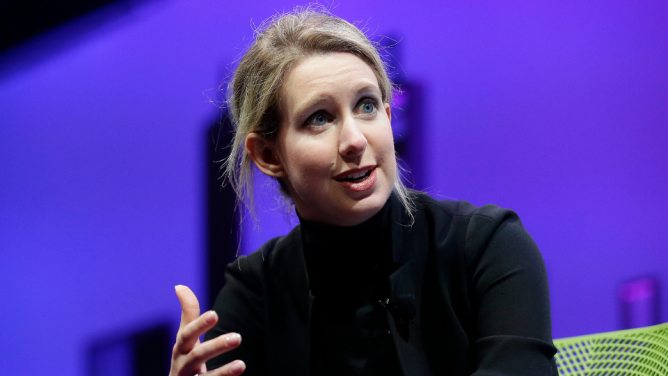 Following her summer program with Stanford, Holmes decided to enroll at the university as a chemical engineering major in college. She spent the summer after her freshman year interning at the Genome Institute in Singapore, where she tested blood samples for SARS-CoV-1. As a sophomore, she filed her first patent application for a wearable drug-delivery patch and founded her company, Real-Time Cures, which would later become what was commonly known as Theranos. By the next semester, she had dropped out of Stanford entirely to pursue her work with Theranos full time.

How much money did Elizabeth Holmes steal?

After launching Theranos, Holmes was introduced to venture capitalists through her former Stanford advisor, Channing Roberston. The young entrepreneur quickly began to secure funding from prominent investors, raising around $6 million in venture capital by the end of 2004. Over the course of the next decade, it is believed Holmes amassed over $700 million in funding for Theranos.

For years, Theranos was shrouded in secrecy; there was no public company website or press releases, and investors were not given any details about how her technology really worked. It wasn’t until 2013 that the public face of Theranos grew when it partnered with Walgreens to establish in-store blood sample collection centers. It was around this time that Holmes started making headlines: she gave talks, spoke on panels and graced the covers of Fortune and Forbes, which named her the youngest self-made woman billionaire at the age of 30. Her company, Theranos, had a reported valuation of $9 billion at its peak.

But something wasn’t quite adding up. Ian Gibbons, Theranos’ chief scientist and one of the company’s earliest hires, found flaws in the company technology and expressed concerns to Holmes that tests weren’t ready for the general public to use, according to a Vanity Fair investigative report by Nick Bilton. Outside experts also began to share their reservations about Theranos. These doubts came to a head in 2015, when medical research professor John Ioannidis, and later Eleftherios Diamandis, questioned the validity of her company’s technology.

Later that year, Wall Street Journal reporter John Carreyrou published a damning investigative report into Theranos, which alleged that the company’s blood-testing machine, Edison, was not capable of providing accurate testing results. Instead, Theranos was using traditional blood testing machines to run its tests. It is alleged that Holmes knew, yet continued to lie to her investors, doctors and patients in an effort to raise capital.

Following the WSJ report, the FDA launched an investigation into Theranos. The 2015 investigation resulted in multiple observed violations of FDA Title 21 Regulations. By January of 2016, the Centers for Medicare and Medicaid Services also launched an investigation into a Theranos laboratory in Newark, California, where they uncovered irregularities in testing. Months later, CMS officially banned Holmes from owning or operating a clinical blood-testing laboratory for two years. In the years to come, Theranos continued to face a string of legal challenges and sanctions from multiple medical authorities, state and federal organizations, investors and patients. After years of lawsuits, what remained of the company was dissolved in September 2018.

What is Elizabeth Holmes’ net worth?

So, what is Elizabeth Holmes’ net worth today? After the fall of Theranos, Elizabeth Holmes’ net worth went from a reported $4.5 billion to $0 as of 2022, according to Forbes. The former company’s founder and CEO was also charged with fraud by the U.S. Securities and Exchange Commission (SEC), alongside former company president Ramesh “Sunny” Balwani in 2018. That same year, the United States Attorney for the Northern District of California announced the indictment of Holmes and Balwani on wire fraud and conspiracy charges.

Holmes’ trial was originally scheduled to begin in August 2020, but was delayed following her pregnancy. Her trial began a year later in August 2021. On January 3, 2022, Holmes was found guilty of three counts of wire fraud and one count of conspiracy to commit wire fraud. On November 18, 2022, she was sentenced to 11 years and three months in prison, commencing on April 27, 2023.