I know it’s still pretty hot outside, but I’m already thinking about fall. Clearly, so is Dunkin’! The company just announced that its fall menu will drop on August 18 this year, so it won’t be long before all I can think about is pumpkin spice. Yes, you read that correctly—our PSL days aren’t so far off after all. America runs on pumpkin, folks!

And honestly, thank goodness. I was getting sick of drinking strawberry lemonade and celery juice all the time! But if August 18 feels a little early for us to be enjoying the official drink of fall, that’s because it is—this is actually the earliest that Drunkin’ has ever released its fall menu, but they’re not waiting to give the people what they want!

Dunkin’s version of the Pumpkin Spice Latte caused quite the frenzy when it debuted last year, so I think it’s safe to assume that the same thing will happen in 2021. Coffee purists, avert your eyes! If you’re a die-hard St*rb*cks drinker who has never tried Dunkin’s Pumpkin Spice Latte before, here’s the flavor rundown: It’s a classic mix of cinnamon and pumpkin flavors with some notes of vanilla, espresso and even more pumpkin thrown in for good measure.

Basically, it’s pumpkin-on-pumpkin with a dash of actual coffee, so it’s perfect if you prefer your morning drink to be as sweet as possible. It’s finished off with a drizzle of caramel and just a hint of cinnamon sugar on top. Oh—and you can enjoy it either hot or over ice, if you’re one of those bizarre people who drinks cold coffee on an even colder day. 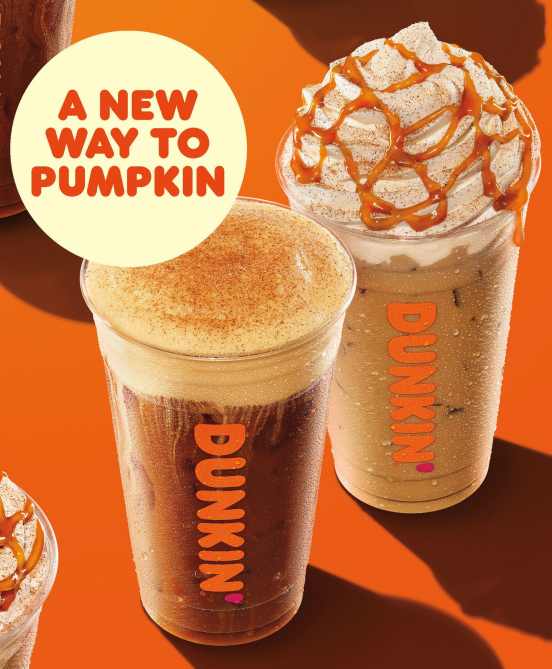 It’s not all pumpkin in the drink department, though—Dunkin’ will also be expanding its selection of Refreshers to include Apple Cranberry Coconut and Apple Cranberry if you want to start out with some summer-adjacent drinks before diving head-first into all things pumpkin spice. Or, you can just nibble on some fall-inspired sweet treats while you wait for the weather to change! The fall menu’s food offerings will include a Pumpkin Donut, an Apple Cider Donut, a Pumpkin Muffin and some adorable little pumpkin-flavored Munchkins.

To sweeten the deal just a little but more, Dunkin’ will kick off the fall menu with a deal, so let this be your sign to drink even more coffee than you already do. When the fall menu rolls out on August 18, you can get a medium Pumpkin Cream Cold Brew or Pumpkin Spice Signature Latte for just three! bucks! The deal runs through September 14—while supplies last, of course!

A medium coffee for $3 is the type of thing that will actually make me get out of bed in the morning, so excuse me while I check to see what time my location opens. Thank you, Dunkin’, for the autumn blessing we didn’t know we needed.