Nearly a decade ago, Duchess Camilla gave Kate Middleton a wedding gift worthy of a royal bride. And it’s the kind of gift that had the Duchess of Cornwall dipping into her own personal jewelry collection!

When the Duke and Duchess of Cambridge married in April 2011 at Westminster Abbey in London, the entire royal family was in attendance for their special day—and that includes Prince William’s stepmother, the Duchess of Cornwall (who married William’s father, Prince Charles, in 2005). According to Hello! Mag, it is believed that Camilla presented her future daughter-in-law with a gold charm bracelet on her wedding day with Prince William. The bracelet is also thought to have been rather special to Camilla, as it was originally personalized just for her.

The bracelet—which you can see Kate wearing on her right wrist in the photo below—looks like a traditional gold chain-link design, but upon closer inspection, it also features an engraved charm. The charm was first engraved with a “C” for Camilla and a crown, but for Kate’s wedding, it seems the Duchess of Cornwall had her daughter-in-law’s monogram engraved too. On the opposite side of the charm is another cursive “C” for Catherine, Kate’s given name, with a ducal coronet on top. 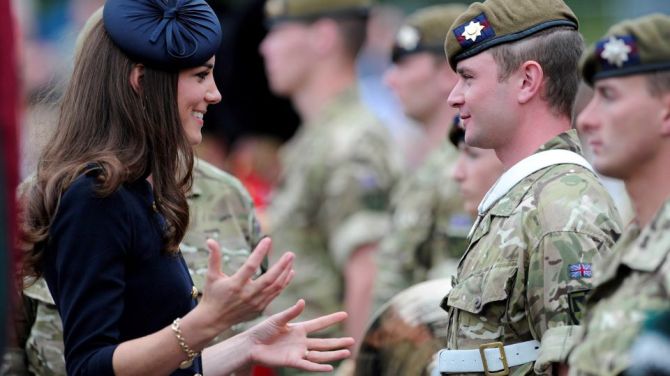 While the newly-crested Duchess of Cambridge didn’t wear the bracelet for her nuptials, she was spotted out wearing it a handful of times in the months following her wedding. In June 2011, Kate wore the bracelet during her military visit with Prince William to the Victoria Barracks and again to the Wimbledon Championships later that month. She was later photographed wearing the charm bracelet a month later at the Santa Barbara Polo Match during her official royal tour to California with the duke.

Interestingly, Kate hasn’t been seen out wearing the bracelet since her wedding year—but there’s no reason to think that’s any shade toward Duchess Camilla. A close look at the bracelet reveals that it was a little big for comfort on Kate, so it’s safe to assume she’s retired the sentimental piece of jewelry to her personal vault—which, of course, also includes notable statement pieces like the engagement ring that once belonged to her husband’s mother, the late Princess Diana, and an eternity ring gifted to her by Prince William following the birth of their first son, Prince George.