As one of the most successful pop stars in the world, fans have always been interested in Dua Lipa‘s boyfriend and who she’s dated. Lipa, who is from London, entered the music scene in August 2015 with her debut single, “New Love.” She went on to release songs like “Be the One” and “Blow Your Mind (Mwah)” before her first number-one single in the United Kingdom, “New Rules,” in July 2017.

After that, Lipa’s career continued to rise with hits like “IDGAF” and “One Kiss” with Calvin Harris.” In March 2020, Lipa released her sophomore album, Future Nostalgia, which featured chart-topping tracks like “Don’t Start Now,” “Physical” and “Break My Heart.” Lipa, who won the Grammy for Best New Artist in 2019, was also nominated in the Album of the Year category for Future Nostalgia at the 2021 Grammys.

With so much done in so little time, it’s hard to believe that Lipa found love amid all of her success. In an interview with Elle UK in 2018, Lipa opened up about why she’s always been a romantic. “I’m such a firm believer in love. I blame my parents for that because they have a really good relationship and I think they’ve set my standards high,” she said at the time. “Life is too not short not to say ‘I love you.’ As much as I tell myself not to rush into things or be careful to say ‘I love you’ too fast without really knowing if there’s any substance in the relationship, I think it’s really important to go with your gut.”

Still, though she’s always been a romantic, Lipa doesn’t look down on the times she’s been single.  “When I’m single, I end up having so much more time to do a lot of other stuff,” she said. “I think you learn so much more about yourself when you’re completely alone and you have no one to go to for help for certain things. You learn to rely on yourself in a different way.”

So who is Dua Lipa’s boyfriend and who has she dated in the past? Ahead is a look at Lipa’s dating history, from a Hadid brother to her first public relationship. 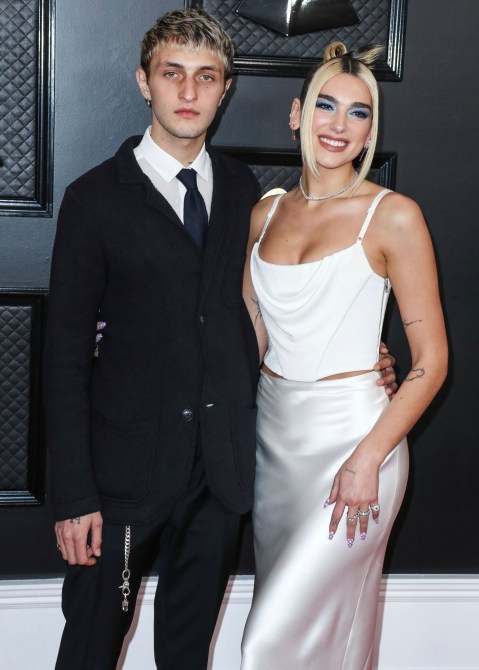 Dua and Anwar started dating in June 2019 after the “Don’t Start Now” split from her longtime boyfriend, Isaac Carew. According to TMZ, Anwar’s sister, Gigi Hadid, who is friends with Dua, introduced them after Anwar told her that he’s a fan of the “Physical” singer’s music. The site reported July 2019 that Anwar asked Dua on a date after her breakup in June. After the date went well, Anwar invited Dua to his 20th birthday later that month and spent several days with him in Los Angeles before flying back to London, where she lived at the time.

The two were first photographed together at the British Summer Time Hyde Park music festival in London in July 2019, where they were seen kissing. According to TMZ, Dua and Anwar bonded over their love of music when they first started dating. (Anwar released his EP Bleach in 2020.)

In an interview with British Vogue in February 2021, Dua opened up about her relationship with Anwar and why the couple is “quite private” in real life despite their public affair on social media. “We have all these incredible memories and experiences, and if there’s something that we want to share together, then OK that’s fun,” she said. “But at the same time, we’re quite private — we’ll only show you as much as we want you to see.”

She continued, “It’s a little bit of give and take, trying to find the right balance of being so excited and being in love, and wanting to share that with the people around me, but at the same time not wanting to put too much out there. I want to be able to just be happy in this relationship without having other people’s opinions.” 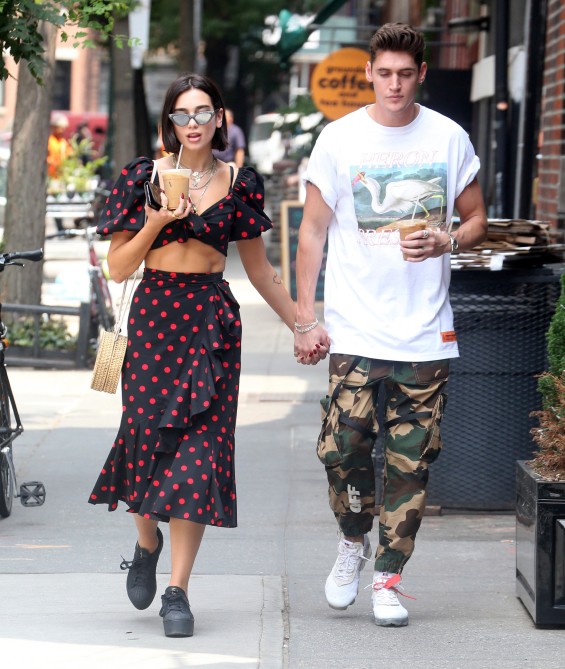 Dua and Isaac, a model and a chef, dated on and off from 2013 to 2019. The two first split in early 2017, which is when Dua went on to date LANY lead singer Paul Klein. However, January 2018, Dua had broken up with Paul and reunited with Isaac. The two dated for another year before ending their relationship in June 2019. “Dua and Isaac have really struggled to see each other since getting back together,” a source told The Sun at the time. “They wanted to make things work and things were great between them for a while but she is just getting busier and busier.”

The insider continued, “She is gearing up to release new music and has basically been performing across the world non-stop for the past three years so it’s been tough. It’s been a difficult decision but ultimately they haven’t been able to make things work.”

Their breakup came after rumors that Isaac had cheated on Dua after he was seen with another woman at London’s G-A-Y nightclub in 2018, according to The Sun. The cheating rumors were never confirmed, however, fans believe that Dua and Isaac weren’t together at the time of the nightclub sighting. 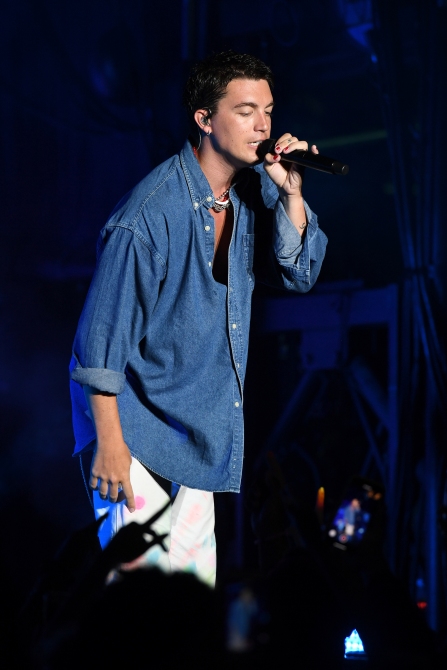 In between her breakups from Isaac, Dua dated LANY lead singer, Paul Klein. According to The Sun, the two met at the British Summertime Festival in Hyde Park in July 2017 and even spent Christmas together in London in December. However, by January 2018, The Sun reported that Dua had broken up with Paul to reunite with her ex, Isaac. “Dua and Paul had a really good time together but things just didn’t work out,” a source said at the time. “She is very positive about the situation though, and has been pouring her emotions into her new album, which she has been writing in Jamaica and Los Angeles.

The insider continued, “The break-up has brought back memories of Isaac, who she split with this time last year. She has been messaging him again but she has been out of the country for the last few weeks so they haven’t seen each other.”

In 2018, LANY released their album, Malibu Nights, which many believe to be about Paul’s relationship with Dua. In an interview with SCMP in 2020, Dua revealed that she hasn’t listened to her ex-boyfriend’s songs. “I haven’t really heard it,” she said.