It’s been less than a year since Dorinda Medley left The Real Housewives of New York City, but there are already rumors about her return to Bravo for season 2 of Real Housewives Ultimate Girls Trip, Peacock’s Real Housewives spinoff that brings together cast members from various cities for one drama-filled vacation.

The rumored cast, which consists of all former Housewives, includes Dorinda; her RHONY co-star Jill Zarin; Real Housewives of Beverly Hills’ Taylor Armstrong and Brandi Glanville; Real Housewives of Orange County‘s Vicki Gunvalson and Tamra Judge; and Real Housewives of Atlanta’s Phaedra Parks and Eva Marcille. According to reports, the cast filmed over the course of a week in September at Blue Stone Manor, Dorinda’s estate in Berkshire County, Massachusetts, that has been featured in various episodes of RHONY.

While Dorinda didn’t confirm the rumors about RHUGT season 2, she did hint that fans wouldn’t be “let down” if she did return to TV with other former Housewives. “Everyone misses Blue Stone Manor. Nothing would be better than to have an old school backup of Blue Stone Manor,” Dorinda tells STYLECASTER as part of her partnership with Amazon Devices . “You can’t go wrong with that combination. If or when it is happening, I think it’ll be a huge success and nobody will be let down. Again, everyone is looking forward to that old school situation. It’s all looking positive.” 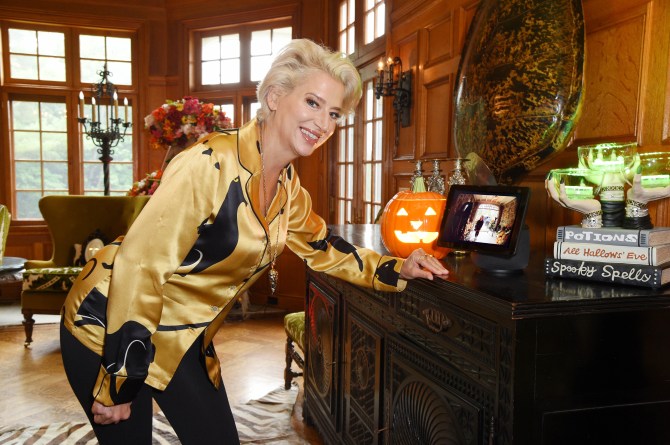 As Bravo fans know, Dorinda can’t talk about Blue Stone Manor without discussing the Fish Room, the estate’s famous bedroom decorated with three massive mounted fish. While Dorinda declined to reveal the guest of the Fish Room on RHUGT season 2, she teased that the Housewife “appreciated” the decor more than her former RHONY co-stars, who famously refused to stay in the room.

“You know I can’t be giving away secrets like that. Do you want me to come back to the Housewives or not? I start giving away secrets like that, they’ll never have me back,” Dorinda says. “You know me, I’m not one to spill the beans very easily. Let’s just say that, if someone were to stay in the Fish Room, this person really appreciated the decor.”

While most of her rumored RHUGT cast mates were from other cities, Dorinda did have one former RHONY co-star at Blue Stone Manor: Jill Zarin, who viewers last saw her feud with at a Halloween party on RHONY season 12. When asked about her relationship with Jill now, Dorinda confirmed she’s “never had a problem” with her former RHONY co-star, despite rumors of their “beef” on RHUGT.

“My relationship with Jill has always been good. I’ve never had a problem with Jill, much to what people say,” Dorinda says. “Jill and I knew each other long before the show started. In fact, she was one of the first people to bring me on. I don’t know if you remember, it was her charity; I was sitting at her table. I was always on the back scenes of the Housewives for years and years. I was there before you even knew I was there.”

As for if she would come back to RHONY, Dorinda confirmed that she would “definitely” consider the opportunity to return, but explained that the decision isn’t hers to make. “You never say never. Listen, I think it’s important to focus on the present and where you are in the present,” she says. “If that happens, I’m going to make a decision. It’s not my decision. I know everybody asks me, ‘Am I going back?’ That ain’t my decision. That’s the higher-ups. But I would definitely consider it because I had a great time on Bravo. Bravo has presented so many great opportunities. I wouldn’t be doing this Amazon commercial right now if it wasn’t for my presence on Bravo and the platform.” 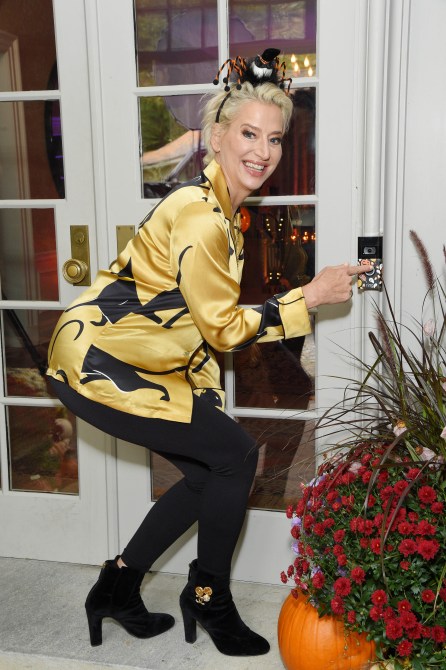 As fans await news about a possible RHUGT season 2, Dorinda is focused on Halloween. For Halloween this year, Dorinda has transformed Blue Stone Manor into a “smart haunted house” with the help of Echo Show 10 , Amazon’s new Alexa device, which she can use to turn on her Halloween decor connected to Amazon Smart Plugs with one command: Alexa, make it nice and spooky—which is a play on her iconic RHONY quote: “I made it nice!” Blue Stone Manor’s smart Halloween decorations also includes a Ring Doorbell that’s set up with a seasonal faceplate and a “scream” chime tone that alerts Dorinda to when guests arrive. “I’m always worried about introducing new technology in such an old house—because it’s a 1902 house—but it was super simple,” Dorinda says. “Before you know it, the whole house is on command.” She adds, “I just wish that I had the Echo Show 10 when we were potentially filming because then I could’ve spooked the girls out with some creepy music from Alexa.”