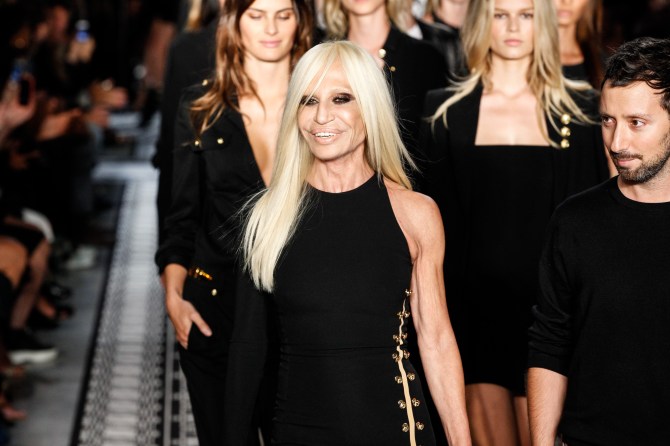 With her long platinum hair and larger-than-life lips (yep, she had ’em first), Donatella Versace has one of the most unforgettable faces in fashion. Couple that with her close friendships with everyone from Givenchy’s Riccardo Tisci (she starred in the house’s AW ’15 campaign) to Jennifer Lopez, and it’s no wonder that Versace’s leading lady has been an industry icon for nearly 50 years.

Now, however, she’s furthering her influence by finally launching her personal Instagram account. The 60-year-old designer is no stranger to the ‘gram, having posted a pretty unforgettable Ice Bucket Challenge video (complete with lots of Versace print and gorgeous half-naked male models) last year on the label’s official account.

Donatella obviously did her homework regarding both what people want to see on Insta and how to use the app like a pro, as evidenced by her tasteful first snap: a selfie with Gigi Hadid. Not only did she tag the supermodel in the pic, but she also included Gigi’s handle, a hashtag, and a salutation in the caption—power move, DV!

Versace joins a slew of other designers who launched their personal accounts this year, including Marc Jacobs and Alber Elbaz, but there’s something extra exciting about an OTT personality like Donatella giving us glimpses into her fabulous life. We can only imagine what’s in store—humblebrags from the Versace mansion? Fashion week hedonism? Selfies with muse and BFF Lady Gaga? And don’t even get us started on the possible #TBTs of the house’s iconic Versus campaigns starring every ’90s supermodel ever. We advise you to follow ASAP.