Among the litany of questions and concerns Americans have about President Trump—guess we’ve got to start getting used to that term now—fears about how his policies will affect women’s healthcare are at the very top. We know he’s going to defund Planned Parenthood, something he’s been bragging about ever since he won the nomination. And we know he’s pro-life, which doesn’t bode well for his protecting a woman’s right to choose. But what exactly will all this talk mean for women, practically, after Trump is sworn in on January 20th?

If Trump goes through with banning safe, legal abortions—more on what he’s said about them below—millions of American women could be left with very few options, potentially forcing us to attempt to self-induce our own abortions without medical assistance, Planned Parenthood has speculated.

And as part of the Affordable Care Act—something Trump said he will work with Congress to repeal on his first day in office—many forms of birth control are free. As various media outlets are now reporting, Trump doesn’t even need Congress’s help to make this happen, since Obamacare only stipulates that insurance has to cover preventative health benefits for women, not contraceptives per se. So Trump only has to order his government minions (who he’s hiring as I write this) to redefine what preventative health for women means.

If Trump does this, as he’s repeatedly planned to do, Planned Parenthood predicts that prices for the pill, IUDs, and other safe contraceptive methods will skyrocket, causing women to pay approximately $1.4 billion more each year. This explains why you’ve likely seen more than a few urges on social media for women to get an IUD (which lasts five years) before Trump takes office. 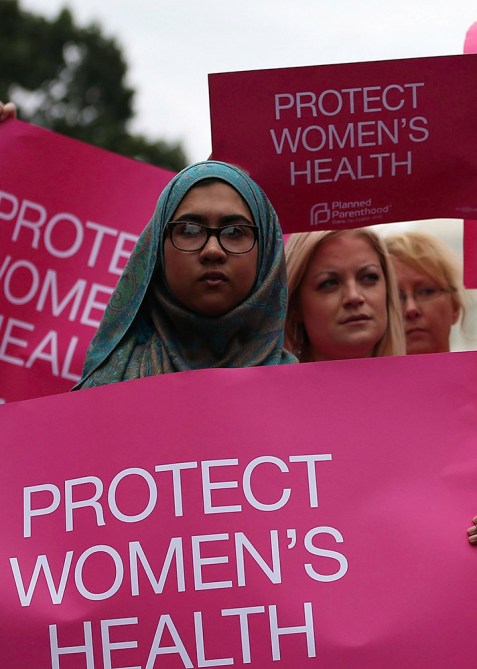 While Trump has talked at length, and in explicit terms, about women’s bodies and what we should be allowed to do with them, he hasn’t said much that indicates he’s remotely educated on the subject. During the last debate, he said, “You can take the baby and rip the baby out of the womb of the mother just prior to the birth of the baby. Now, you can say that that is OK, and Hillary can say that that is OK, but it’s not OK with me.”

Just to spell it out for anyone who’s as confused as Trump about how abortion works—there is no ripping involved (it’s far gentler than that), and it doesn’t happen nine months into pregnancy, at least under normal circumstances. What’s more, federal funding isn’t even used to provide abortions by Planned Parenthood. That’s been banned by law in almost all cases since 1976. Planned Parenthood does offer abortions, but they’re paid for private donors and foundations and fees, as to comply with the Hyde Amendment. Abortions actually make up only about 3 percent of all Planned Parenthood’s services provided by Planned Parenthood, according to FactCheck.org.

“Planned Parenthood has been here for 100 years, and one thing is clear: We will never back down and we will never stop fighting to ensure that Planned Parenthood patients have access to the care they need, people who come from communities that need our continued support in this new reality—immigrants, people of color, the LGBTQ community, people of faith, and more,” Planned Parenthood said in a statement. “Health care should not be political. Every morning, Planned Parenthood health center staff across the country wake up and open their doors, as they have this morning, to care for anyone who needs them, regardless of race, religion, sexual orientation, gender, income, or country of origin. They will do so today, they will do so tomorrow, they will do so every day as they have for 100 years.”

We’re already nostalgic for the days when the devotion of a female president to women’s health rights was still a real possibility. In the third debate, Hillary Clinton’s words on the topic were passionate, accurate, and incredibly reassuring: “I will defend Planned Parenthood. I will defend Roe v. Wade, and I will defend women’s rights to make their own health care decisions,” she said. “I have met with women who have, toward the end of their pregnancy, get worst news one can get—that their health is in jeopardy if they continue to carry to term. Or that something terrible has happened or just been discovered about the pregnancy. I do not think the United States government should be stepping in and making those most personal of decisions.”

Sorry to rub it in, ladies, but it’s official: No politician is going to come to our rescue now, and possibly for the next four years. Now it’s up to us to voice our concerns, advocate for our bodies, and fight for the kind of healthcare we deserve. For ways to get involved with supporting Planned Parenthood, click here.