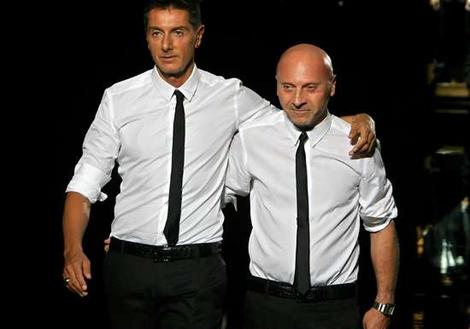 Are we ready for another dose of Woody Allen movie magic? Absolutely. Are we twice as excited for his next film, To Rome With Love, to hit theaters? Yes. Wanna know why? Well, we’ll tell you. Two of our favorite guys in fashion are set to make a cameo in the movie. That’s right folks, the Italian design duo Domenico Dolce and Stefano Gabbana will appear in the story that follows several people as they experience life in Italy. Appropriate, no? The boys will play audience members of the opera Pagliacci at the Argentina Theatre in Rome.

If you can remember back to the movie Nine, which starred some of our Hollywood faves like Penelope Cruz and Kate Hudson, then you may recall that Stefano and Domenico played Italian priests, rocking some serious robes that looked pretty close to runway ready. According to Swide, the boys love cinema and have their dream roles all picked out.

For Stefano, it’s Cher‘s role in The Witches of Eastwick and Domenico yearns to play any role in a Totò film.

All we can say is, we’re rooting for you guys! And we’re definitely counting down the days ’till we get to experience Dolce and Gabbana in their latest roles!