So…do Connell and Marianne end up together? Well, here’s what happens: In the final episode of Normal People, Connell and Marianne find themselves in a happy relationship for the first time in a long time. They celebrate Christmas and New Year’s with Connell’s family and friends, and it seems like their relationship will finally work out after years of ugly breakups. Then, one day, Connell receives the news that he was accepted into an MFA program in New York City. When he first tells Marianne, he tells her that he doesn’t want to go, as he just started to create a life for himself in Dublin after years of feeling lost and alone in college. Marianne tells him not to think about what he wants to choose at that time and to simply celebrate that he was accepted into his dream program. 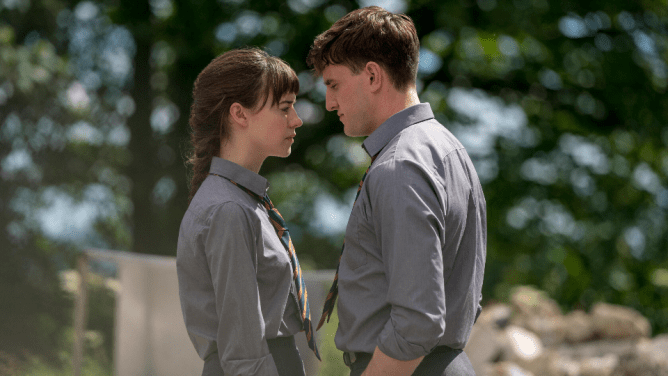 Later in the episode, Marianne and Connell revisit the topic as Marianne moves into her own place in Dublin. Marianne tells Connell that she thinks he should go to New York. He tells her that would miss her too much. She tells him that he would be sad at first, but that feeling would pass. He then agrees that he will go to New York, but he’ll be back in a year after the program is done and he and Marianne can be together. She tells him that neither of them can promise each other that, as no one knows where they will be in their lives in a year. Marianne then tells Connell that everything will be OK, as they’ve learned what they needed from each other to move forward in their lives. Connell then tells Marianne that he will always love her, and they cry in each other’s arms. In the final seconds of the show, Connell tells Marianne that he’ll go, while Marianne responds by telling him that she’ll stay.

Compared to the Normal People book, which leaves the ending more unclear as to whether Connell leaves or stays, the show makes it crystal clear that Connell and Marianne don’t end up together. That doesn’t mean that they won’t be together in the future. As the creators have hinted, if Normal People is greenlit for a season 2, the show could explore Marianne and Connell’s 10 years in the future, where they reunite and pick up where they left off. As for now, though, it doesn’t seem like Connell and Marianne end up together. Sorry, Monnell shippers.