Dead to Me season 2 picks up where season 1 ended: At Jen’s house as she and Judy look at Steve’s dead body in her pool. As explained via flashbacks, Jen killed Steve after he called her a “cunt” and suggested that her dead husband, Ted (who he and Judy killed in a hit and run), wanted to divorce her and kill himself. At first, Jen tries to shoot Steve with a gun, but when there are no bullets, she smashes his head with a wooden bird in her robe pocket. When Steve looks back at her, with a bleeding skull, Jen pushes him into the pool where he drowns to death. After Steve’s death, Jen and Judy stuff his body into a locked freezer in Jen’s garage. But when Jen learns that her garage is infested with rats who can bite through her freezer with razor-sharp teeth, she buys chemicals to dissolve Steve’s body. However, she can’t go through with it, which is when she and Judy decide to bury Steve’s body to the Angeles Forest (where Jen’s son’s friend, Shandy told her there are other dead bodies buried.) They drive in Steve’s Mercedes, but are ticketed on the way back, which creates evidence of where they were. Jen and Judy hide the car in a storage unit similar to where Jen and Steve hid their hit-and-run vehicle in season 1. 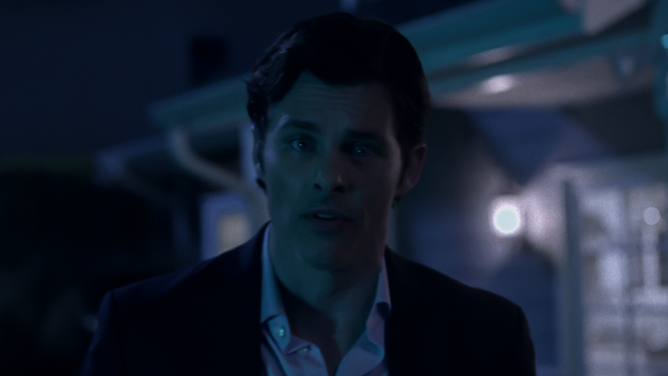 When they return to the house, Jen gives away the freezer to the rat exterminator. She also hides the wooden bird she used to kill Steve in a bush in her backyard. Everything went according to plan until Jen’s son, Charlie, finds Steve’s Mercedes in the storage unit and thinks it’s a birthday surprise from his mom. Charlie takes the car for a joy ride with his influencer girlfriend, Parker, who posts photos of them in the car on her Instagram. When Jen learns that Charlie took the car, she burns it. She also bribes Parker’s girlfriend with money for her to delete the photos in the car. Meanwhile, Steve’s twin brother, Ben, hosts a vigil for his missing brother, where Charlie sees a photo of Steve in the car on a slideshow and realizes that the Mercedes was his. When he confronts his mother about it, Jen lies and says that Steve gave it to her as an apology for pulling out of a real estate deal.

After Charlie breaks up with Parker, Parker calls the police and gives them the photo of her and Charlie in Steve’s car. There is also CCTV footage of the two driving in Steve’s car around Laguna Beach. After Jen and Judy learn that Perez thinks Charlie killed Steve, Judy offers to take the blame for the murder because she doesn’t want Jen’s kids to be without their mom. That’s when Jen tells Judy that she didn’t kill Steve out of self defense, as Judy had thought. Judy becomes mad at Jen, especially after Jen tells her that she’ll love anyone who gives her attention. Jen feels guilty for how she treated Judy, so she writes a note to Judy and her sons, telling them the truth, and turns herself in with Perez. Perez and Jen drive to the Angeles Forest, but can’t find Steve’s body. On the way back, Perez tells Jen that she won’t arrest her and will push the case under the rug because she believes that Steve threatened her and she doesn’t want her to leave her children. So, yes, Jen and Judy get away with murder. For now.

In the final minutes, viewers see a dog dig up something near a tree with a heart carved into it. (To keep track of where the body was, Judy carved a heart into a tree, unbeknownst to Jen.) Viewers also see Ben receive an emotional phone call from someone, which leads him to drink and drive and crash his car into Judy and Jen’s vehicle. And that’s where Dead to Me season 2 ended. Long story short, Jen and Judy get away with murder, but who knows if they’ll be caught in season 3?